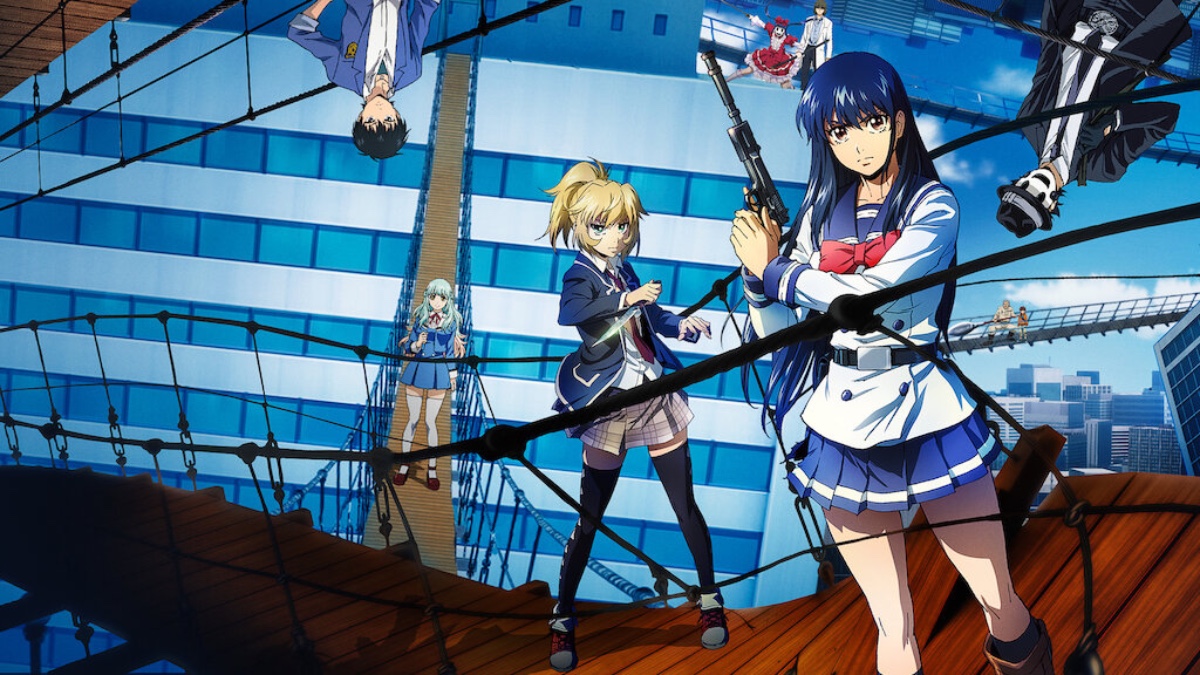 Television currently exists in a place where there’s a constant stream of new shows and it becomes incredibly easy for some series to sink and get lost at sea. This can be even more prevalent when it comes to anime since it’s sometimes quite difficult to determine which series really strive to be innovative and challenging.

At first glance, High-Rise Invasion looks like an indulgent excuse for sadistic killers to act out Hostel-like slasher fantasies. But it’s in fact a much deeper series about humanity, free will, and the quest to become a literal God. Yuri Honjo has a seemingly simple goal to reunite with her brother, Rika, and escape their circumstances, but there’s a rich tapestry of mysteries that surround both the “realm” and the individuals within it that are easy to confuse. Here are some questions that arise from High-Rise Invasion season 1’s conclusion.

What Is The Realm?

One of the biggest mysteries in High-Rise Invasion involves this new world that Yuri and everyone else wake up in. This environment consists entirely of a series of interconnected skyscrapers where it’s impossible to descend and the primary means of travel are rope bridges that link together the apartment buildings. It’s made clear that these aren’t just normal skyscrapers that everyone has been trapped upon and that this is an entirely new “realm.” Everyone that wakes up in the realm is forced to abide by the different rules that apply to all of them, which makes it clear that this world is more like a gameboard or training ground than anything else.

There’s a sole helicopter that patrols the realm and lands in a different location each day that’s able to help people escape from this reality. However, it begins to look like escaping the realm isn’t the ultimate plan and that there’s a lot more to experience and manipulate in this world, which to some is more appealing than what lies back outside in reality.

Who Are The Mask-Wearing Individuals?

One of the first rude awakenings that Yuri experiences after she wakes up in this high-rise nightmare is the wealth of mask-wearing, weapon-wielding individuals that seem to want her dead. Initially it seems like the different Masks are villains, but the situation is much more complicated than that and they’re their own kind of prisoners in this scenario.

Known as Angels, these masks are actually advanced pieces of technology that hack into the wearer’s brain in order to reprogram them and install new “software.” The majority of Masks that Yuri encounters have a smiling expression on them, but it turns out that there are actually a variety of Masks, each with their own specific functions.

What Are The Different Types Of Masks And What Do They Mean?

There are four basic Mask designs that have been featured so far in High-Rise Invasion. The Smiling Masks are the most common and they’re worn by characters like Sniper Mask, Chef Mask, Maid Mask, Baseball Mask, and many more. Yuri at first assumes that the Smiling Masks want to murder her and the other individuals, but their programming is more morbid than that. The Smiling Masks operate off of a Despair, Murder, and Suicide command protocol. First they try to make a human so miserable and filled with despair that they’ll lose all hope and commit suicide by jumping off of the skyscrapers. If Despair cannot be initiated, only then will the Mask turn to murder to finish the job, but only as a last resort. Finally, if a mask is removed for too long, becomes broken, or somehow otherwise compromised then it will push the directive that the mask wearer should kill themselves and eliminate any loose ends.

The Angry Masks, which have a sad expression on them, have only been seen on Dealer Mask, Soldier Mask, and Miko Mask. These individuals are also known as Guardian Angels due to their increased level of consciousness. These Masks are still able to talk, have a level of self-awareness, and know the locations of vital items within the realm. The purpose of the Guardian Angels is to explicitly prevent the destruction of the realm and those that try to interfere with the larger mission. They’ll only kill humans when they’re threatened or they sense hostility in individuals, which triggers their Protect directive.

The Emotionless Masks have a neutral expression on them and they appear to be even rarer and operate like some strange support system. Emotionless Masks can also freely speak and are used to provide supplies to the realm and are not supposed to incite violence or conflict. The biggest example of an Emotionless Mask so far is when one ominously approaches Sniper Mask and Kuon, only to wish them both good luck and limited information on the realm’s God Candidate purpose.

Lastly, there’s also a fourth variety of mask known as the Faceless Mask, but it’s designed to self-destruct after its use is fulfilled, which means they’re rarely actually seen being worn by anyone. It eventually becomes clear that the realm’s true purpose is to find the Perfect God and that a certain mask is vital to this process. The Faceless Masks contain the code to turn humans into God Candidates. The Faceless Mask’s installation process takes ten minutes to complete, at which point it shatters and the wearer has a wealth of new powers at their access, while also all of their original personality intact.

What Is The Mask’s Hibernation Mode?

There’s a moment in High-Rise Invasion where the programming from Mayuko’s mask forces her to enter hibernation mode. This appears to be an uncommon process and it only happens the one time to Mayuko, but it’s a precautionary protocol that kicks in when a mask becomes defective or faulty due to multiple directives running at once or severe resistance from the individual. This is a time-sensitive procedure that is designed to eliminate compromised Angels, but it’s able to be reversed by a God Candidate

What Are The God Candidates?

The main goal within High-Rise Invasion’s realm is to build a new God and that individual is culled from a number of potential God Candidates, also known as Those Who Have Become Closer to God. The Faceless Masks install programming to help these humans evolve and become prepared for the next stage of the realm.

High-Rise Invasion has shown off a number of the perks and abilities that God Candidates receive, such as the ability to manipulate and control other Masks, to suspend an Angel’s hibernation, to gain control of the epic railgun that’s within the realm, and have a better intuition towards the strength and location of others. One of the biggest advantages of God Candidates is that Angels are specifically programmed to not do them any harm. Kuon Shinzaki, Mamoru Aikawa, and eventually Yuri herself, are the major God Candidates that have currently been introduced.

What Does The Perfect God Achieve?

The High-Rise Invasion realm sets out to create multiple God Candidates with the hopes that one of them will best the others and that all of this is the necessary means to an end in order to create a Perfect God. The Perfect God will rule over this realm and be able to decide the rules and structure that will govern the world. It’s said that this God will be able to have any of their desires fulfilled as they have limitless power over the creation and plan regarding their new dominion. It’s unclear if this process has been done before and why exactly the Administrator has willed all of this together, but its end goal is at least clear.

Who Is The Administrator?

The Administrator is the one who calls the shots in High-Rise Invasion and the one that’s put this macabre competition together. At this point the Administrator remains a faceless mystery and remains a foreboding title. It’s unclear if they are also a God and looking to abandon their responsibilities once they find a suitable replacement, but it’s clear that more with the Administrator is coming. If he’s the one responsible for all of this advanced technology then he’s also likely someone that can’t be fully trusted and will lead to some conflicting moral territory for Yuri in the future.

What Is Rika’s Connection To Sniper Mask?

Many of the Masks in High-Rise Invasion are affected by some form of memory loss due to the programming that’s invaded and overwritten their brains. Sniper Mask slowly gains access to his sense of self when his mask becomes cracked and it causes him to become fixated on Rika. Sniper Mask is convinced that he and Rika share a connection and the truth doesn’t come to light in season one, but there’s definitely a link between them that’s deeper than just a friendship. It’s possible that Sniper Mask and Rika have some kind of familial connection, just like how the anime reveals over time that Uzuki is the Mask Yayoi Kusakabe’s son.

Does Yuri Reunite With Her Brother And Escape?

So much of High-Rise Invasion’s first season deals with the characters’ attempts to simply get a decent grasp on their new environment. Larger missions like escape and becoming the Perfect God are crucial, but underneath all of this is Yuri’s desire to find her brother, Rika. Yuri accomplishes a lot through this season, but she and Rika are still apart when the episodes end.

Mamoru, a malevolent God Candidate, has captured and brainwashed Rika, judging by the code that he forces upon him in the post-credit sequence. Mamoru has a cabal of Masks that he’s able to control and it’s very possible that Rika has just been added to his collection. Yuri builds a strong team of Masks and God Candidates alike that are all ready to storm the Administrator, become Perfect God, and rewrite the rules so that they can all survive and escape.

The first season of High-Rise Invasion is currently available to stream on Netflix.