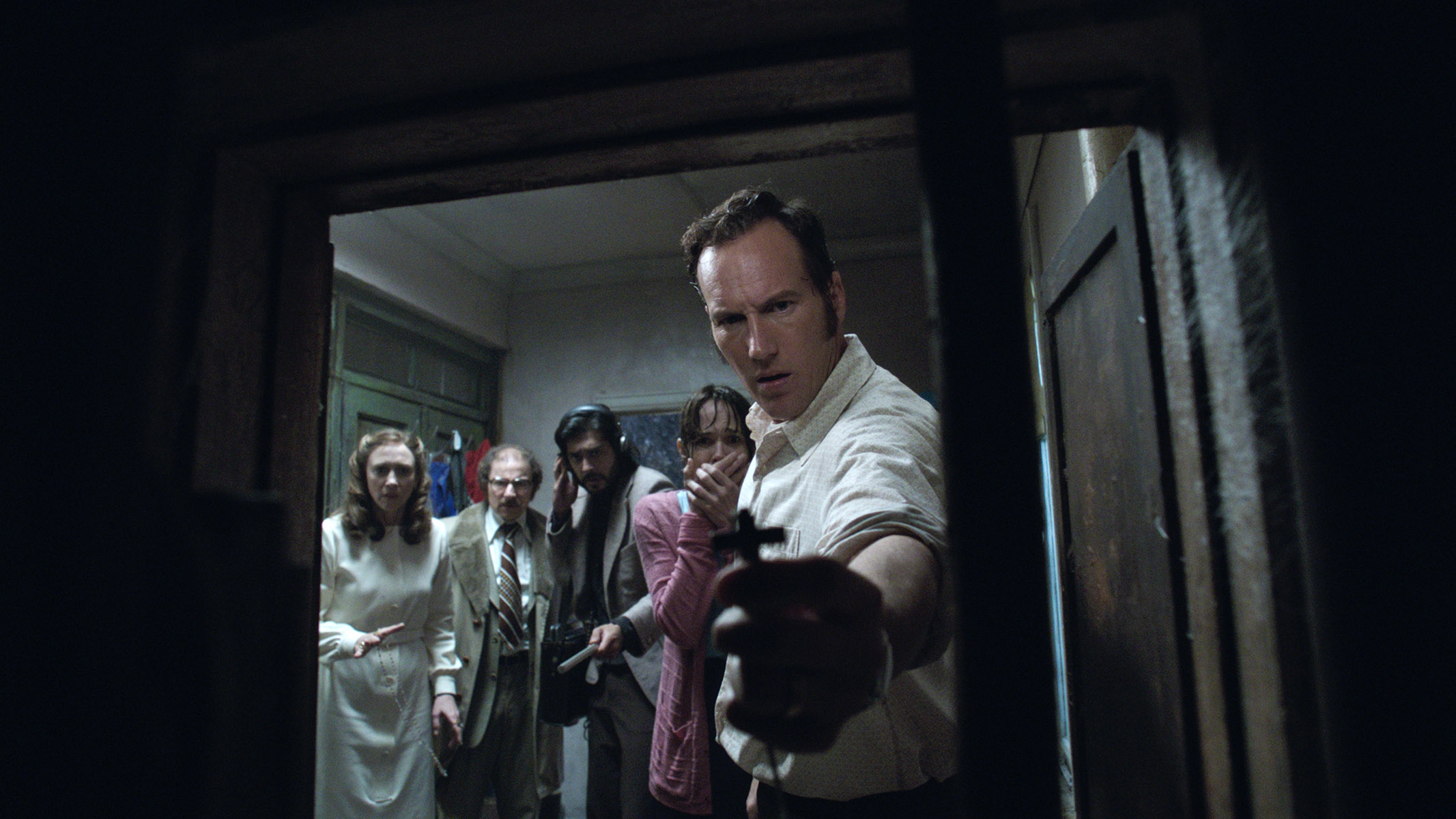 Lorraine Warren has seen true evil at the start of The Conjuring 2 and wants to call it quits — at least for a while — but when the Hodgson family finds itself under siege by a terrible haunting, the paranormal investigators have no choice but to help. Set in the late ’70s in the London Borough of Enfield, The Conjuring 2 ticks off many of the same boxes as the original: haunted house, demonic possession, and a relentless pace full of jump scares that doesn’t let up until the Warrens are back in their spooky museum, locking away their latest ghostly trinket just before the credits roll.

And like the first movie, which is based on the real-life investigations of demonologist Ed Warren and the clairvoyant Lorraine, The Conjuring 2 is heavily inspired by a true story, one that captured the attention of British tabloids — and even the BBC — just as Jay Anson’s The Amityville Horror was hitting bookshelves. The film nods to Amityville, the Warrens’ most famous case, in its opening scene, and later ties it to Enfield through the recurring “Nun” demon Valak.

But there was no demon in the real Enfield case but a poltergeist, a malicious spirit that haunts people through physical disturbances such as shuffling things around a room, levitating its victims, or banging on doors at night. And in the film, the Warrens, who tag along with British paranormal investigators Maurice Grosse and Anita Gregory, do suspect a troublesome spirit before the third act reveal that there’s actually something demonic behind the creepy ghost of Bill Wilkins.

The real-life Hodgson family began experiencing poltergeist activity in their Enfield home in 1977. At first, Peggy, a single mother of four, didn’t believe her daughters Janet, 11, and Margaret, 12, when they told her the chest of drawers in their bedroom was moving on its own. But when the chest slammed against the door, locking Peggy out of the girls’ room and forcing her to run to her neighbors for help, she was convinced.

Peggy called the police, and like in the movie, a constable reported that “a large armchair moved, unassisted, 4 ft across the floor,” according to the Daily Mail. The police officers’ quick exit from the house is played for laughs in the film, but a terrified Peggy Hodgson probably wasn’t laughing at all.

The disturbances only got worse from there. The Hodgsons reportedly suffered all manner of strange happenings in the house for the next 18 months, including furniture being overturned, toys being thrown, banging noises, writing appearing on the walls, and even levitating children. In 2012, Janet told iTV (via People) that cups would inexplicably fill with water, things would randomly burst into flame, and that disembodied voices would speak to them, too.

According to Janet, “The most frightening [encounter] was when a curtain wrapped itself around my neck next to my bed.”

Peggy eventually turned to the press for help, reaching out to the Daily Mirror. The tabloid sent a photographer, Graham Morris, to the house to capture the hauntings, and that’s when all hell broke loose. The Enfield case might be one of the best documented paranormal cases in history, thanks to Morris’ disturbing pictures of his visit to the Hodgson house.

Among these images is a photo of Janet being tossed across her bedroom by the poltergeist while her sister Margaret watches in horror. As you might suspect if you’ve watched The Conjuring 2, it’s very possible that the picture is staged, Janet leaping off her bed and onto the floor, but we can only go by Morris’ account here, and he seemed convinced.

“It was chaos, things started flying around, people were screaming,” Morris said of his visit, according to the Daily Mail.

The Daily Mirror and the Hodgsons next called the paranormal investigators of the Society of Psychical Research, including Maurice Grosse and Anita Gregory, along with Guy Lyon Playfair, who isn’t depicted in the movie.

“When I first got there, nothing happened for a while. Then I experienced Lego pieces flying across the room, and marbles, and the extraordinary thing was, when you picked them up they were hot,” Grosse told writer Will Storr about the first days of his investigation (via the Daily Mail). “I was standing in the kitchen and a T-shirt leapt off the table and flew into the other side of the room while I was standing by it.”

Then the poltergeist decided to speak.

As in the movie, the ghost of Bill Wilkins reached out to the investigators through Janet, a raspy voice emanating from the little girl while her “lips hardly seemed to be moving.” The spirit told Grosse and Playfair that it had died of a hemorrhage in the living room. Investigators later confirmed with Wilkins’ son that a man by that name had indeed died in the house many years before, according to Daily Mail.

In the video below, you can hear Wilkins’ supposed voice for yourself:

There were skeptics from the start, of course, and the debate around the Enfield case continues today. Even Playfair observed in his case notes that Wilkins generally “refused to speak unless the girls were alone in the room with the door closed” and that the Hodgson children were “motivated to add to the activity with some tricks of their own.” Playfair wrote that when Janet knew cameras were on, nothing seemed to happen. But Grosse and Playfair were believers.

Anita Gregory concluded that the case was overrated, and many skeptics accused the Hodgson family of making up the haunting for fame or financial gain. At different points, the investigators caught the girls bending spoons themselves and banging on ceilings with broom handles. Like in the movie, catching the girls in the act seemed to be enough for Gregory and others to close the case.

In 1980, Janet admitted to iTV (via Daily Mail): “Oh yeah, once or twice [we faked phenomena], just to see if Mr. Grosse and Mr. Playfair would catch us. They always did.” Just ahead of the movie’s release, Janet told Daily Mail that only “two percent” of the occurrences were faked.

But what about the other 98 percent? Many other investigators outside of the SPR visited the Hodgson house in those 18 months, including the Warrens. While Ed and Lorraine didn’t have to save the kids from any demonic nuns in real life, whatever they did see while at the house seemed to convince them that supernatural forces were indeed at work.

“Those who deal with the supernatural day in and day out know the phenomena are there – there’s no doubt about it,” Ed said of the Hodgson case, according to People.

Meanwhile, a magician named Milbourne Christopher dropped by to check things out, and said the activity was the work of “a little girl who wanted to cause trouble and who was very, very clever.” Ray Alan, a ventriloquist, said Janet was playing tricks with Bill’s voice because she enjoyed the attention.

By 1979, the tabloids had moved on from the Hodgsons, while the experts couldn’t agree on a logical explanation. Despite the movie’s happy ending, the real-life case was never truly closed. Janet told Daily Mail in 2015 that things began to “quiet down” in the fall of 1978 when a priest visited the house. But the next family that moved in reported strange incidents too, including hearing voices downstairs and encountering a man walking into rooms. They only lived in the house for two months, according to Daily Mail.

Years later, Janet called the events she lived through in that house traumatic, revealing she had a “short spell” at a psychiatric hospital and that she was bullied at school, where her classmates called her “Ghost Girl.” She told Daily Mail that her mother also had a nervous breakdown. It’s not surprising, then, that Janet “wasn’t very happy to hear about the film” being made about the Enfield case, as it dug up old memories she’d hoped to leave behind when she moved out of the house at age 16.

But The Conjuring 2 wasn’t the first to dramatize the events of the Enfield case. The BBC’s controversial 1992 mockumentary Ghostwatch took a rather different approach. Disguised as a special live investigation of a haunted house on Halloween night, the 90-minute program was hosted by real-life broadcaster Michael Parkinson and featured several other TV presenters to lend it an air of credibility. The mockumentary even had a call-in number viewers could dial into to share their own ghost stories.

While the reporters are highly skeptical of the hauntings at first, strange things begin to happen that become more difficult to explain as the film progresses, and Ghostwatch crescendos when the reporters and their paranormal expert realize they’ve fallen prey to a very real poltergeist. The terrifying final scene of the film proved so controversial that the BBC received thousands of complaints after the airing as well as calls from frightened viewers who thought the program was real. The BBC never aired Ghostwatch again, although you can now find it on the Internet Archive. Today, the film is considered a cult classic among horror enthusiasts.

But in the end, The Conjuring 2 and Ghostwatch are just two more chapters in a story that continues to fascinate believers and skeptics alike more than 40 years later. And despite the many attempts to investigate the case or dramatize it, no one but the Hodgsons will ever know what truly happened inside that house in Enfield.