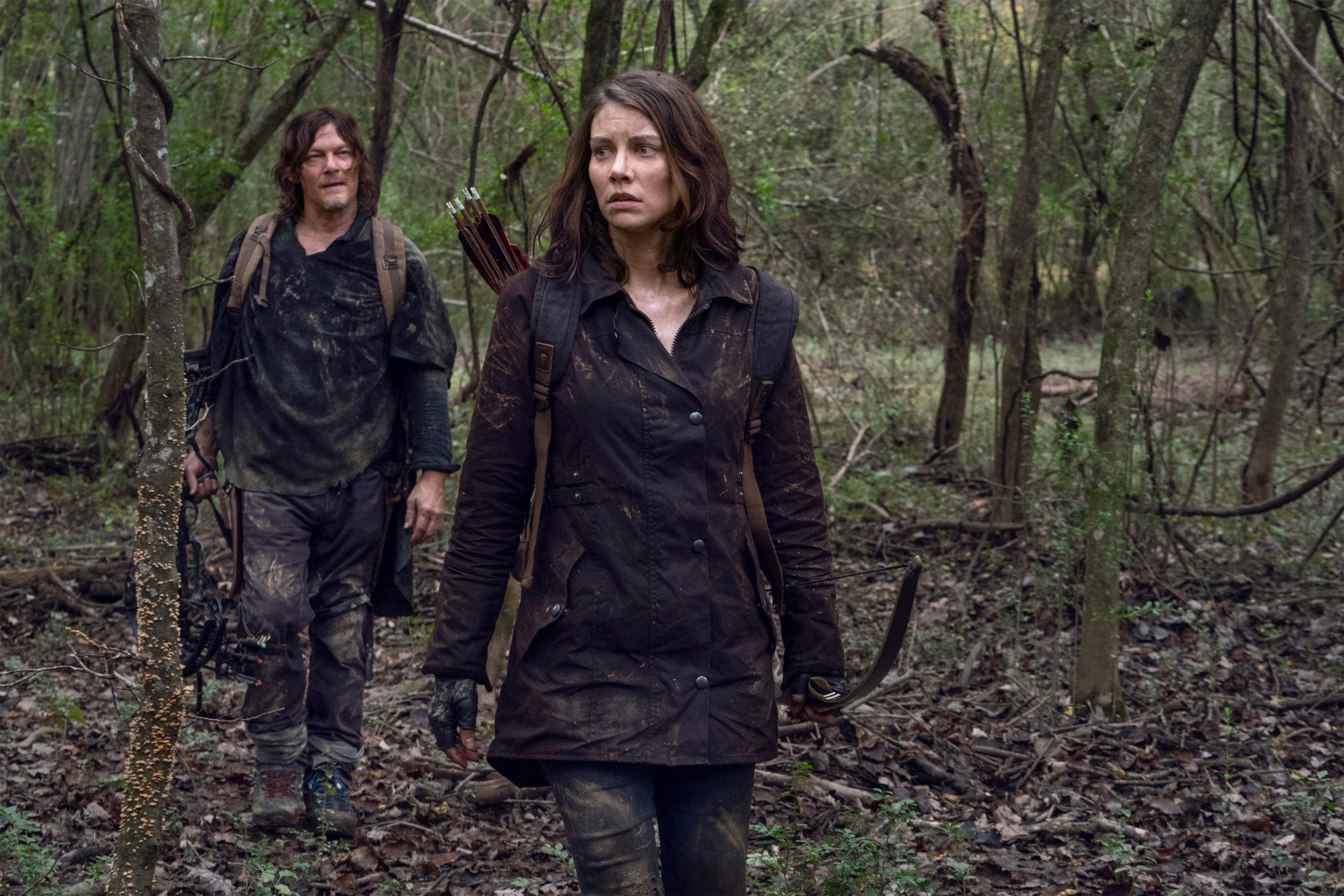 This article contains spoilers for The Walking Dead season 10 episode 17.

Midway through the first hour of The Walking Dead’s six-episode season 10C, Maggie’s group comes across the smoked-out wreckage of their latest living space, with two smouldering bodies outside. Immediately, Maggie, Cole, and the masked Elijah all know who is responsible for the devastation.

The fear in Cole’s voice and his certainty in who sabotaged his crew is definitely a rough sign for the survivors of The Walking Dead. They just made it through a protracted war with the Whisperers by the skin of their teeth and now there appears to be another formidable opponent in their midst. Maggie later confirms that there is indeed a new antagonistic group. She calls them “The Reapers” and they attacked Maggie’s home after her smaller crew disbanded from Georgie’s society-building project.

Who are The Reapers exactly though? And what does their arrival mean for The Walking Dead “season 10C” and the upcoming final season after that?

The short, frustrating answer is that “we don’t know.” While iconic Walking Dead villains like Negan and the Saviors and Alpha and the Whisperers came directly from Robert Kirkman’s original comic source, there are no Reapers in said comics. Nor is there a group who closely matches up to the Reapers M.O., or at least their M.O. as we understand it currently.

Thankfully, Walking Dead showrunner Angela Kang spoke with Den of Geek prior to this season 10C premiere and revealed how the writing staff goes about crafting a new villain group when there is an absence of source material from the comics.

“Whenever we’re dealing with a group from the comics, there’s usually a pretty well-defined kind of concept to them,” Kang says. “For example, the Whisperers, they’ve decided to roam the world with the dead. When we go to create groups that supplement material we’re taking from the comics, we try and take that same approach, which is to kind of say, what is their philosophy about how to survive? What did it come from? What is their background? “

Even though they have no direct comic inspiration, there are still some clues for what The Reapers are all about that we can derive from their brief appearance during this episode and from some other Walking Dead media.

Maggie and Daryl make contact with one Reaper at episode’s end. He hides in the forest, heavily camouflaged, and picks members of Maggie’s group off one by one with sniper fire. When the combat changes to close quarters, the Reaper is no less formidable. He shrugs off a knife wound, an arrow bolt, and throws Daryl around like a rag doll.

Finally, Daryl and company get the drop on the unnamed Reaper and Maggie demands to know, at bolt-point, why his group is tormenting them and where they come from. The Reaper only smiles, says one word in an unfamiliar language, and then blows himself up with a grenade.

“We’re seeing that this person knows a lot of really pretty intense fighting techniques,” Kang says of the Reaper and his group. “There’s this sort of militaristic aspect to them. We’re trying to figure out how does this prove to be a unique challenge to our people? We start imagining the type of people that fill that group and why they have taken the tactics that they use today. From their perspective, it has to make sense. There has to be an internal logic to the group and how that’s worked for them in order to get 12 years into apocalypse and still be alive.”

So…that’s a lot of intrigue for just one brief appearance. And it raises a lot of questions as well. What language was the Reaper speaking? To my untrained ear, it sounded to be Russian or at least a similar Slavic language. When prompted to listen for Russian, the microphone tool on Google Translate interpreted the phrase to be “let’s cry.” That doesn’t seem very accurate in context so perhaps the word is not Russian after all.

Regardless, it seems likely that this Reaper is not a native English speaker and that’s certainly curious. Given the fact that Alexandria and its surroundings are in the DC suburbs, perhaps the Reapers are international consuls who made it through years of the apocalypse by sticking together and killing Americans. Is that likely? Eh, probably not. But it’s all I’ve got thus far on context clues. (For what it’s worth, Kang calls this theory “interesting” though she was probably just being polite.)

Interestingly, though there are no obvious analogues to Reapers in The Walking Dead comic, Telltale’s The Walking Dead videogame does feature a group of Russian antagonists. The aptly-named “The Russian Group” was made up of four Russian-accented individuals who attacked Clementine’s group in Season Two of the game. Their run is relatively brief and it’s never explained how four Russian-speakers made their way to the post-apocalyptic American heartland.

In addition to featuring Russians, both The Walking Dead comic and TV show have acknowledged the world outside the U.S. on several occasions. In season 1 of the show, Dr. Edwin Jenner shares a rumor with Rick’s group that French scientists had figured this whole zombie apocalypse out. Given that it’s been several years since then and the French cavalry has not arrived, this was likely just always a rumor.

What’s even more interesting than his potential nationality, however, is that the Reaper opted to commit a fiery suicide rather than answer any of Maggie’s questions. This suggests that there are some real, extreme ideological methods to the Reapers’ madness. Clearly they believe in some sort of cause that is not only important enough to kill Maggie’s group for, but also to die for as well. Perhaps they are determined nihilists who view the splinters of Maggie’s group as traitors to the amoral, grim world for trying to rebuild society.

Whatever their reasonings and motivations are, it’s clear that The Reapers will be heard from again.