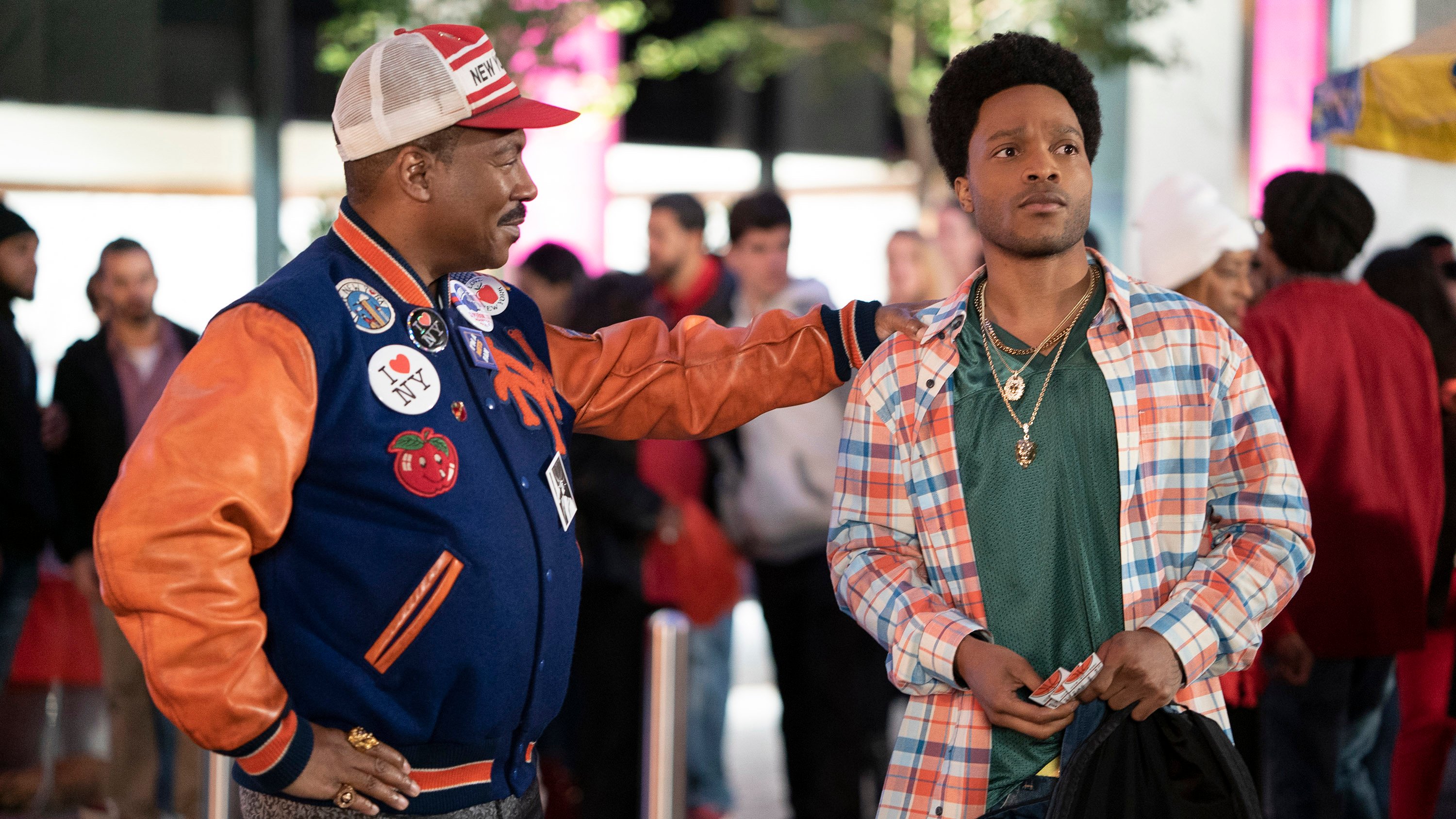 One thing Coming 2 Ameirca is not lacking in is nostalgia and easter eggs for the past. Before the opening credits have even concluded, we’ve learned that Prince Akeem (Eddie Murphy) has surprisingly kept a sentimental photo of his one-time barber from 1988, and another of himself in a McDowell’s uniform. (To be fair though, McDowell’s is at least where he wooed his future queen Lisa.) Soon enough John Amos and Louie Anderson also show up for a bow in the opening montage.

Yet one of the best callbacks in the whole film is slightly subtler when we learn of the fates of Randolph and Mortimer Duke, the two capitalist blue bloods who were the bad guys in Murphy’s Trading Places. And yes, this means Coming 2 America is also technically a sequel to Trading Places too.

Before the newly crowned King Akeem ever meets his long lost son Lavelle (Jermaine Fowler), we’re introduced to the wayward lad as he’s taking a job interview at D&D Digital. There he’s confronted with a particularly passive aggressive form of racism.

Played with dripping silver spoon condescension by Colin Jost—kind of like the caricature of Jost on SNL’s “Weekend Update” that his cast mate Michael Che likes to jokingly paint—Lavelle’s interviewer is revealed to be Calvin Duke, the grandson of Randolph Duke (Ralph Bellamy).

“My father was Mr. Duke,” Calvin says with maximum smarm, “and my grandfather and great uncle, who founded Duke & Duke. But please just call me Calvin.” Yep, the D&D in the company’s name apparently stands for Duke & Duke, which means the old racist bastards from Trading Places were able to rebuild their empire in some form after Coming to America.

For those who might’ve forgotten, Randolph and Mortimer Duke (Don Ameche) were two old school captains of industry who in 1983 decided to test whether “nature or nurture” determines a man’s ability to succeed. In other words, they take a small time Black hustler who never had much opportunity due to poverty and the color of his skin, Billy Ray Valentine (Eddie Murphy), and put him in charge of the day-to-day operations of their business while also sending their WASPy sycophant aide, Louis Winthorpe III (Dan Aykroyd), to jail on a phony drug dealing charges, casting him into poverty and isolation. It’s a sick game and ultimately highly racist, with neither Duke really wanting Billy Ray to succeed.

Of course it backfires on the old bastards when Billy Ray and Louis eventually join forces and engineer a way to make the two brothers go bankrupt. Yet that isn’t the end of their story. In an often overlooked easter egg from Coming to America, the Duke brothers appear sleeping beneath the Brooklyn bridge in the dead of winter. It’s there that Prince Akeem unwittingly gives away thousands of dollars (he’s eschewing wealth) to the homeless men huddled under a blanket.

After he walks away we learn it was the Dukes! And realizing this is the capital they need to start rebuilding their wealth, a giddy Randolph exclaims, “Mortimer, we’re back!”

Unfortunately, they apparently were able to use Akeem’s money to revamp Duke & Duke, probably stepping on a lot of folks along the way. But it seems the rebuilt company still has the same culture behind its shiny modern veneer, as demonstrated by Calvin being a sneering racist who makes harsh judgments about Lavelle because he “grew up without a father” (which is already a loaded question for a prospective employer to ask).

Calvin also soon enough reveals he attended boarding school; got into an Ivy League school because his father donated the money to build a library; and that he wore Blackface at the office Christmas Party. “I was Will Smith’s Aladdin, okay? It was blue face over the Blackface,” he protests.

And with that the most unlikely of 1980s comedy shared cinematic universes continued to grow. As we unpacked in further detail here, Trading Places and Coming to America built an unusual shared universe that (if you squint) might also include The Blues Brothers and An American Werewolf in London.