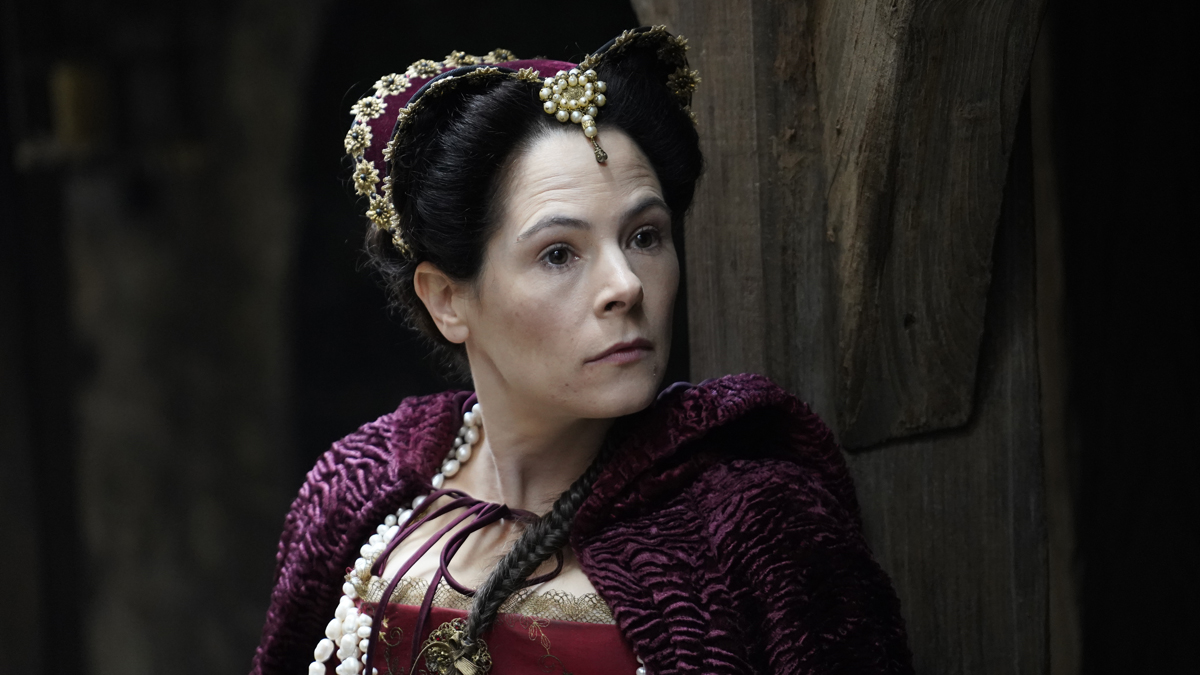 Warning: this A Discovery of Witches review contains spoilers.

A pregnancy! Something really has stuck its finger into the creature gene pot and swirled it around hasn’t it? First it was daemons born to witches and vice versa, now a vampire and a witch have conceived, going against millennia of biology. Whatever next – big, fiery birds swooping out of people’s midriffs to smite their enemies? Yes, exactly! Don’t you just love fantasy?

Corra the firedrake is Diana’s long-promised familiar, an elemental creature unlocked by reaching level six of her weaver training. Knot of one: the spell’s begun. Knot of two: the spell is true. Knot of six: Ca-Kaw! Ca-Kaw! In the same way that Diana’s spellbound powers sprang up to defend her from danger, Corra is here to protect Diana from her foes.

This week, those foes were the cartoonish Kit and Louisa, who hatched a Looney Tunes plan to lure Diana to a secret location, do away with her, and then bask in Matthew’s everlasting gratitude. What dolts. Louisa especially – a vampire who decided the best way to kill someone wasn’t by using her super-speed, inhuman strength and teeth, but a gun, which she couldn’t aim. The anguish of seeing Matthew in such a bestial state was worth it to see those two punished. (I wouldn’t have thought it possible, but this season has done even more to stir my resentment towards Christopher Marlowe than having to read Tamburlaine for GCSE.)

Frustrations at their silliness aside, the fiery fight was an enlivening scene against a very atmospheric backdrop. It’s always energising to see cool-headed Diana lose her rag and lean into her imperious sorceress side, as she did in that “futures, you have none” speech. She told Kit and Louisa, “soon you will die and your deaths will not be gentle, I promise you that.” They may have been the words of a time travelling historian but they also carried the ring of a witch’s curse.

There was pleasing balance in Matthew talking Diana down from her rage before she did the same for him at Bedlam. The Roydons are both such dangerous creatures. Is the world really ready for the fruit of their loins?

Speaking of loins, that heart-vein/witch’s kiss scene was intense. It’s not often a TV viewer feels they ought to turn their back and attend to some paperwork while two fictional characters enjoy a bit of privacy. Matthew drank. Diana syphoned a golden ribbon from his forehead into her heart. Then each panted and rolled away with a look of supreme satisfaction, sparing us no blushes.

Matthew shared another moment of intimacy in his goodbye to Queen Bess (intimacy of a different kind, though admittedly that blood/tooth thing was borderline). Matthew Goode and Barbara Marten acted the socks off that one, evoking real emotion from a time-traveller-meets-historical-figure scenario that might as well have come straight from a Bill and Ted movie. The Queen’s “Shadow” didn’t only soothe her toothache, but also her anxiety about the future of her nation and the legacy she’d leave behind. What a relief to know the future, when the future turns out to be a relief.

Will the Roydons be relieved by whatever is waiting for them back in the modern day? Unlikely. With just four knots left to master, it won’t be long before Diana can take Matthew to a time where she’ll be able to step out of the corset and into a pair of jeans, and – unless they get tickets to Glastonbury – he won’t have to go around wearing that dainty little feathered hat.

Can there really only be one episode to go? Not only is there the not-insignificant matter of young Jack to attend to, there’s also the baby Margaret trouble, Baldwin vs Marcus, the much mentioned Knights of Lazarus, the Oxford blood rage killer, Knox and Gerbert’s hunt for the Book of Life’s missing pages, and Sarah and Emily’s higher magic experiments. You’d need to be a time traveller to get all that covered in a single hour. Thank goodness we haven’t been left hanging about a season three renewal.