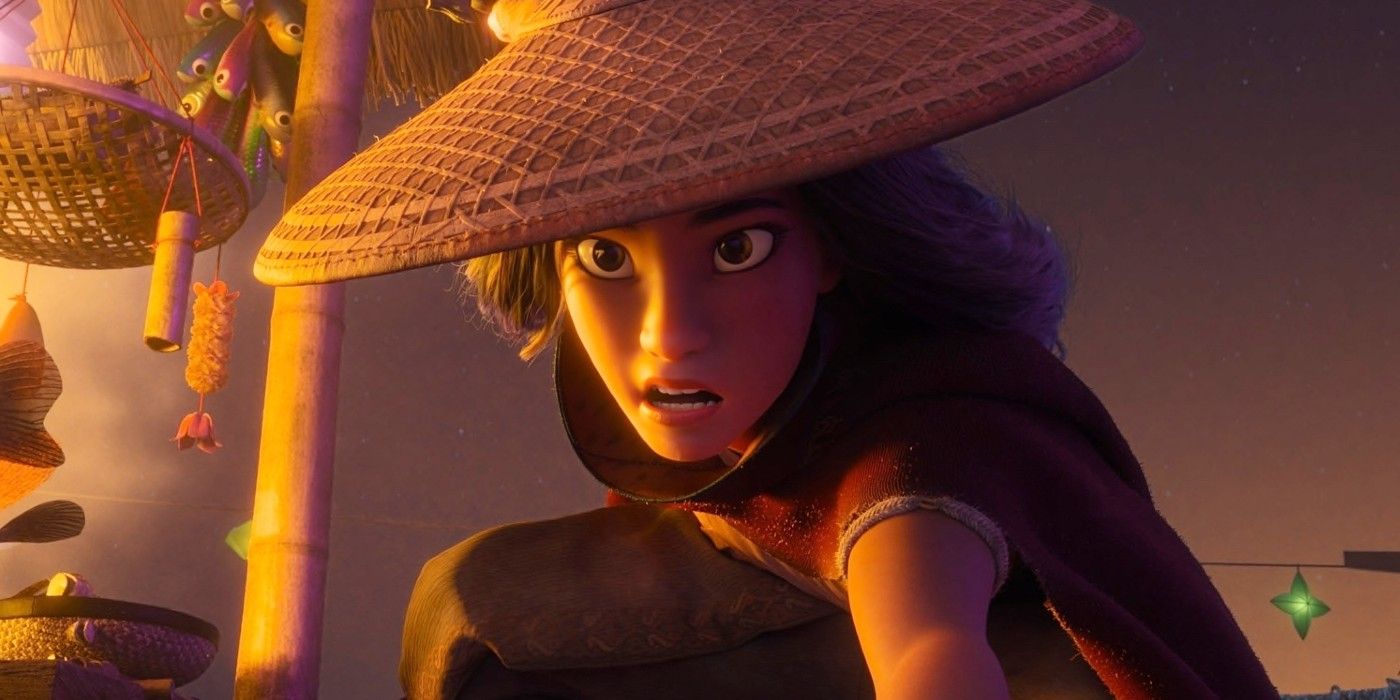 This Raya and the Last Dragon article contains spoilers. You can read our spoiler-free review here.

It almost didn’t end this way. For a brief moment during the climax of Raya and the Last Dragon, it felt like we were a million miles away from any kind of peace. And when Raya (Kelly Marie Tran) marched up the steps of Fang’s parameters in search of Namaari (Gemma Chan), I doubt there was a single viewer who didn’t share her anger—and maybe her thirst for revenge.

Minutes before this sequence, Raya had once again extended the olive branch to her rival and former friend, and once again been betrayed. In their childhood, Namaari had double-crossed Raya once, leading to the disaster that broke the Dragon Gem and unleashed the Druun. Even so, Raya was willing to let that pain (mostly) go. She listened to Sisu (Awkwafina), the lovable and kind-hearted dragon who convinced Raya to look past that memory and once more attempt to find peace with Namaari. For the good of Kumandra.

And, yet again, Namaari deceived Raya by acting conciliatory before pulling a crossbow on her rival and Sisu. Admittedly, neither Raya nor the dragon had any way to realize how conflicted Namaari was about this, or how Namaari’s mother put her up to this treachery, convincing the daughter that Fang only needed Sisu and the Dragon Gem to survive. Not unity. Not peace. Raya probably wasn’t even fully aware it was an accident when Namaari pulled the trigger, killing Sisu. But we did. And even then, it was still too easy to side with Raya’s rage as she approached Namaari in the climax with red in her eyes.

Narmaari is Not a Disney Villain

It would have been simple for the filmmakers to make Namaari the villain. A lesser version of this same story most certainly would have. A storyteller doesn’t have to empathize with Namaari’s itchy trigger finger, or sympathize with her motivations to act selfishly out of a sense of duty. And this is fiction. In our real world, it seems harder every day for people to see each other, flaws and all, for the shared humanity underneath. Why would a Disney movie need to appreciate such nuance?

Nevertheless, Raya and the Last Dragon takes Namaari and Fang to the precipice of being irredeemable, even as it refuses to cross the thin line into Disney Villain territory.

Namaari is an antagonist, to be certain, but there are no villains in Raya and the Last Dragon. The power of its ending comes from getting everyone—including the audience—to see that despite justifiable grievances, we’re not dealing with cartoon characters.

Sisu knew this though. Coming from a different era, one before polarization had turned so toxic in Kumandra, Sisu recalls the day that made her name legendary. When we first meet the adorkable dragon, she’s too modestly self-effacing about how she helped save the world.

“Have you ever done like a group project and there’s that one kid who didn’t pitch in as much but still ended up with the same grade?” Sisu confesses. And yet, as we later see in the movie, it was a group effort in which every dragon played their part that defeated the Druun 500 years ago, including Sisu.

In a flashback, we see Sisu’s older brother use the same river water that is the lifeblood of Kumandra to make the first portion of what became the Dragon Gem. “I don’t know why they chose me,” Sisu says, “it could have been any of us. All I know is they trusted me, and I trusted them. When they put their faith in me, it empowered me beyond anything I can imagine.” Their faith in Sisu, the presumably younger and less self-assured dragon, gave her the resolve to use their combined magic to banish the Druun from Kumandra.

The Dragons Return & Sisu is Reunited With Her Family

Learning from Sisu’s lesson, even after seeing her father’s good diplomacy lead to his seeming death, and then Sisu goes the same way, Raya ultimately makes the choice to again put her faith in unity while the Druun surrounds her and a motley crew of erstwhile representatives from each of Kumandra’s warring regions: Raya from Heart, Boun from Tail, Little Noi from Talon, Tong from Spine… and Namaari from Fang.

No one else can or has good reason to make peace with Namaari. Even in the face of armageddon, giving up their individual Dragon Gem shards would mean certain death, and Namaari’s crossbow put them in this situation. Yet Raya can perhaps see herself still in her rival, who just lost a parent to the Druun like Raya did five years earlier. Also like Raya, Namarri is scared to see beyond her personal grievances. It’s in that moment Raya realizes this isn’t about magic; it’s about trust.

“Let me take the first step,” Raya says while handing off the Dragon Gem shard she’s been carrying around for half a decade. In this action, she sacrifices herself to the idea of a better, less polarized world. In many ways, it mirrors another iconic sacrifice in a Disney movie, with Anna seemingly giving her life to protect Elsa at the end of Frozen, turning to ice in an act of true sisterly love. However, what Raya does is even harder: She gives her life for an idea, and puts faith in someone who’s let her repeatedly down in the worst, most traumatizing ways.

It gives Namaari the impetus to reunite the pieces of the Dragon Gem and, this being a Disney movie, save her life and the lives of all others who’ve been turned to stone, including the dragons.

The Message of Raya and the Last Dragon

It’s perhaps a predictable ending. It’s also nonetheless poignant. Parents and children, adults and adolescents, all can relate to the feeling of alienation and justified distrust. It can be as big on the macro level as world leaders failing to pass a binding resolution that might save lives, and as micro as, well, the kid you can’t expect to do their share of a homework project.

Indeed, the message has an especially uncomfortable timeliness in 2021 after adults throughout Disney’s native country failed to come together during a moment of pandemic and pestilence, and again when many failed to accept the results of the most secure election in American history; and it rings true right now as folks increasingly fractionalize and insulate in their bubbles, be it local communities or social media echo chambers where anyone who disagrees is suspected of the worst, and should thus be immediately cast out.

Yes, there is a reason Raya and the Last Dragon’s ending parable about building bridges, even over scorched earth, strikes a nerve. And why its message of disparate and wary individuals coming together to make a stronger whole is worth hearing right now.

“Welcome to Kumandra,” Raya tells her father when he wakes from his stony slumber to see that, for the first time in ages, his people realize they share the same culture and values. The same humanity. The obvious epiphany feels good and as refreshing as the summer rain.