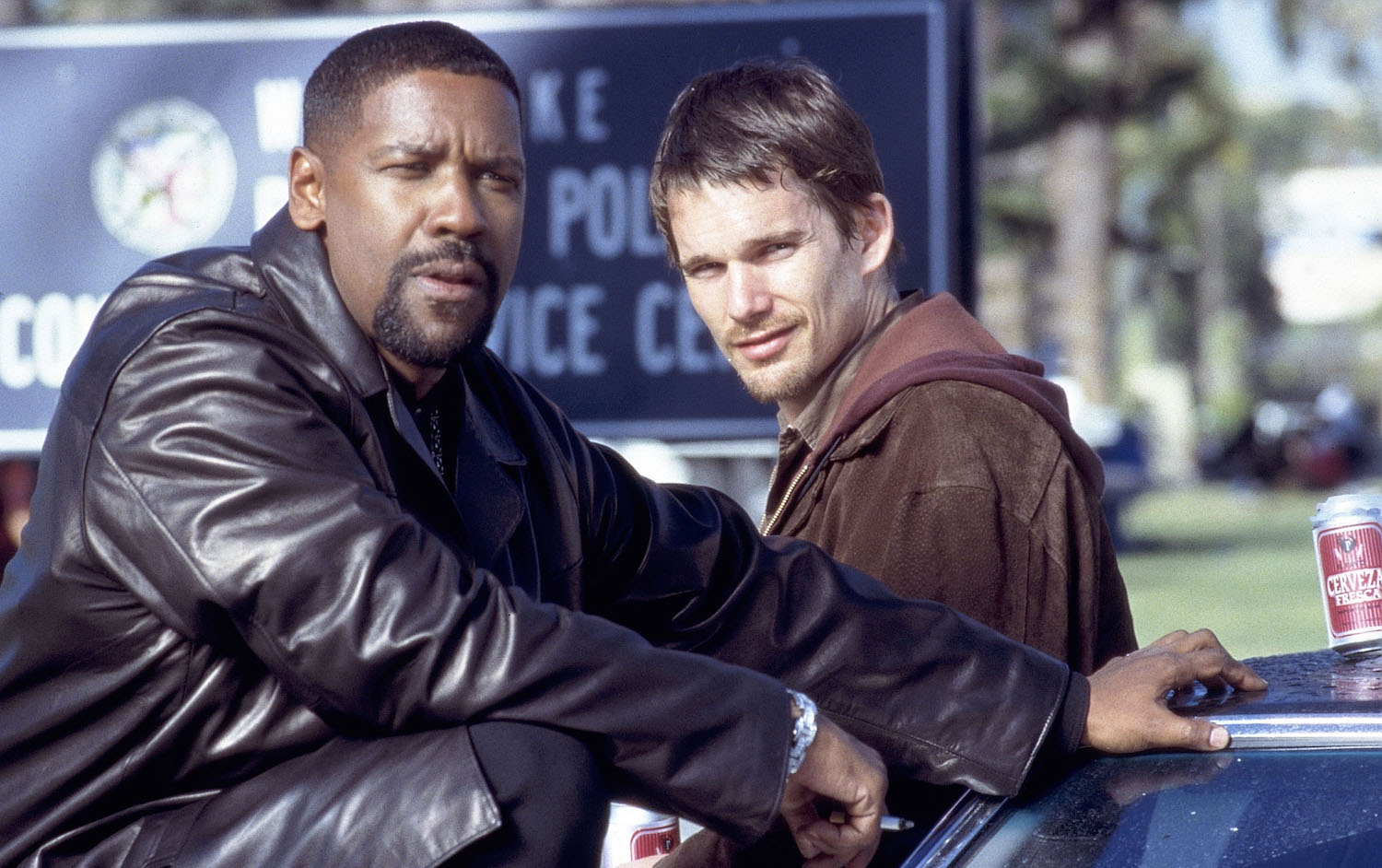 In Training Day, Denzel Washington’s undercover detective Alonzo Harris is playing the long game, and edging both sides against the middle. “This shit’s chess, it ain’t checkers,” he explains to Jake Hoyt (Ethan Hawke), the rookie cop being led down the road to perdition. As another Denzel copper learned in the 1998 Satanic thriller Fallen, the devil often appears in the least likely of guises. For Training Day, Washington plays against type to lay out the temptations of easy money and real, street legal power. Alonzo may not have nabbed Jake’s soul with his opening gambit, but he walked away with an Oscar thanks to this scene.

Throughout the movie, Alonzo maneuvered his impressionable trainee into a place of rage which was both personal and professional. Before the movie begins, Alonzo was given 24 hours to deliver a cool million to a bunch of pissed-off Russians, and the corrupt cop was ready to leave young Hoyt with the bill. The “hot-headed” Alonzo killed a man on a weekend trip to Las Vegas only to find out later that the victim was connected with the Russian mafia.

Meanwhile Jake lands on Alonzo’s proverbial board green behind the ears, and tempted when Alonzo promises to designate him as a “hero” shooter in a raid that left a major drug dealer dead. Harris gave him the designation, along with a fistful of cash, in a bid to buy his soul; the alleged raid was a ruse and setup, orchestrated to steal enough money to pay off the Vegas debt, with enough to spare to take care of all the agents on the inside. It all hinged on the sacrifice of a pawn. Or in this case, a white rook named Jake.

All the other cops on the LAPD’s undercover narcotics squad are happy to pocket their cut. One of the cops takes two bullets for it, one of which goes through his armored vest, in order to sell it as a plausible story of “justifiable homicide in the line of duty.” Jake doesn’t want to be set up as a hero in a case of armed-robbery-with-a-badge, and turns down Alonzo’s payout flatly. He even passes on the promise of a fast-track to detective class which comes with the deal.

There’s nothing more dangerous or unpredictable than a clean cop. But like Lucifer looking to close the deal with Faust, there’s always a different tact. Alonzo apologizes for the “ugly” realities of the real world, even as he explains, “You gotta have a little dirt on you for anybody to trust you.”

Alonzo has been trying to besmudge the narcotics team applicant from the moment Jake showed up for work, but the move had been in play long before that. The “Zig Zag” man makes Jake smoke a bowlful of some mean green with a PCP sheen while cutting off four lanes of traffic (with a non-verbal service revolver retort for anyone complaining of delays).

Alonzo proceeds to get Jake to drink on the job, question his marital fidelity, conduct a search with a takeout menu passing for a warrant, and endure several unnecessary beatings. It is a grooming process, which is wasted on the stubborn youth.

The entire operation, as we come to learn, is to make a score and retain control of the streets. This is a team effort, and everyone has to take one for the team. Peer pressure is a hell of a thing to throw at an aspiring, professional underling, and the Satanic sergeant tosses it like salad in a three-course meal: Do the drugs, take the money, own the streets.

When the rookie narc wannabe breaks a chain of command, which has been handed down by the three Wise Men themselves, Alonzo plays god, the serpent and the King of Kongs to bring the sheep back into the fold. His unholy commandments are set in concrete. The two-man dialogue in the below scene is a diabolically convincing breakdown of common sense coppery. Jake sees Roger (Scott Glenn), the ex-cop and now ex-person left on the floor of the raid, as Alonzo’s friend who the superior killed “like a fly.” But the veteran drug cop knew Roger as “the biggest major violator in Los Angeles,” who he watched “operate with impunity for over 10 years.” Alonzo believes his justifications. “This is the game. I’m playing his ass. That’s my job. That’s your job.”

With this, Alonzo lays it out bluntly, plainly and without room for misinterpretation: Detective Harris is a master ass player, a virtuoso of undercover infiltration. The audience knows Jake has been played as expertly as Roger. Manipulated like some figure on a checkerboard square. Washington sells this idea completely. We do not doubt his sincerity, as evil as the concept is. The character is slick, a little intimidating, and an irresistibly magnanimous prince of a guy. But the actor has one extra weapon in his arsenal, and it is hardly concealed.

Alonzo Harris was Washington’s first villain role. The part is made more deliciously seditious because it subverts everything the performer had thrown on film sets and theaters stages his entire career. Washington excelled in playing men who held themselves to a higher standard. He shed one tear as the ex-slave Private Trip fighting with Union soldiers only to be whipped, publicly, for insubordination in Glory (1989). It would mark the first time he won an Oscar, although in the Supporting Actor category.

He took the blows of apartheid-loving, government-sanctioned sadists as South African activist Steve Biko in Cry Freedom. Washington’s naval executive risked court martial to avert nuclear battle in Crimson Tide (1995). His homophobic lawyer risked the stigma of social alienation to find justice in the age of AIDS in 1993’s Philadelphia. Perhaps, most markedly, his charismatic naturalism embodied the Nation of Islam activist and title character in Spike Lee’s Malcolm X (1992).

There is no practical way to measure the intangible effects respect, adulation, and natural leadership has on a viewer. By the time Training Day came out, Washington was already a mentor, and an inspiration for extremely talented actors. Audiences trusted him and afforded him a gravitas rarely achieved by some of the most seasoned of performers. Hawke’s character is fully primed to continue his education as the squad intended. We accept Alonzo Harris as a veteran who knows exactly what it takes to live through that job.

Washington performed in theater productions, including Othello, When The Chickens Come Home to Roost, and Dark Old Men. He would perform his most audacious Training Day scene in the round. His voice can be heard at the top of the tenement windows which replace the nosebleed seats, when he screams, “King Kong ain’t got shit on me.” But the intimacy of his scene with Hawke, in the car Alonzo calls his office, rounds out the performance with false bravado and quiet desperation.

He is solicitous, empathetic, reasonable, and completely twisted. Alonso knows he seems jaded, and he gets the young officer’s idealism. He was the same way. But when Alonzo fell from grace, he ruled the underworld. He cuts corners, takes graft, hassles kids for free smokes, but he’s got a conviction record which is measured in years, not human lives. It’s scary the first time, taking the money. But it’s how things get done: from the inside.

Det. Harris ranks as one of the greatest villains in cinema history. Washington looks likes he’s having a ball playing him, and Antoine Fuqua crafted an amazingly realistic playground for his moves.

“It takes a wolf to catch a wolf,” Alonzo advises during his tenure in the film. Lone or in a pack, Washington is the alpha dog in Training Day. His bark’s impressive, but it’s got nothing on his bite. Denzel unleashes a devil in a badge with a hellhound on his trail. He can’t rig all the games, but the Oscar was a sure thing in an unsure world.