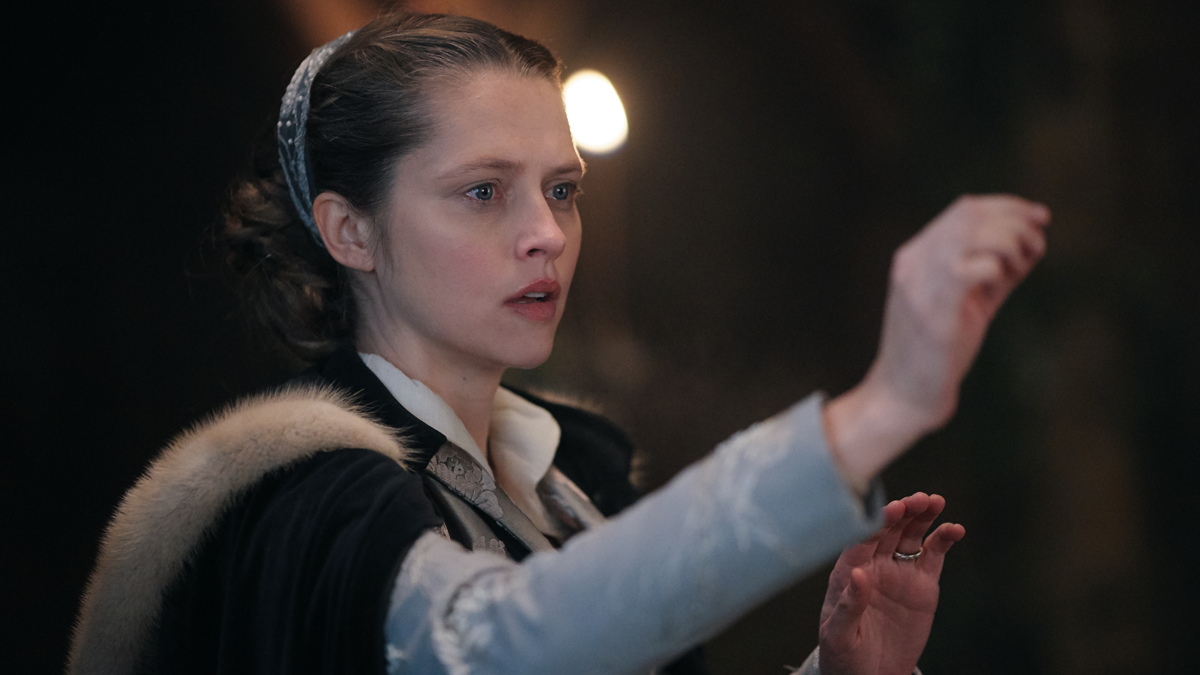 This A Discovery of Witches review contains spoilers.

Say it’s not so. We’re going to have to wait until season three to see Bishop vs Knox, the fight of the century?

Usually when a character spends a series on a skills-training arc, the payoff is a big, satisfying, exploding-fireworks demonstration of those skills. Think Daniel’s crane kick in The Karate Kid or Baby’s lift in Dirty Dancing. (I have no examples from this century. I am an old lady.) They train, they improve, they do something cool in silhouette, and then at the very end, they put on a big show and everybody goes home happy.

The issue here is that this isn’t a movie, it’s not the very end and nobody’s going home just yet. We’re two thirds of the way through this story, so instead of a showdown, we were given an ellipsis. A ‘to-be-continued’ in place of the ending one might imagine would round out ten episodes of book-searching, soul-searching and magic learning.

An ending such as… Diana finally reads the book. Diana shoots golden tree branches from her arms and a fiery dragon out of her belly. Diana joins hands with her aunts, and – why not – her reformed witch enemy Satu, and they call down all manner of sister magic on Peter Knox’s be-suited ass. Then, enemy vanquished, she grabs Matthew, spins him around and dips him for a kiss like that sailor and that nurse on V-J Day in Times Square. Everybody bows. Ysabeau opens a very expensive bottle of Cognac and pours them all a shot. The end.

Not to be. Not least because through Peter Knox, A Discovery of Witches has kept alive the disappointingly long on-screen tradition of breaking lesbian hearts. RIP Aunt Em, who went down fighting. Right before she was killed, she hid the witch page of the Book of Life from Knox, and promised that Diana would unite all creatures against bigots like him, and avenge her.

The bigots vs unity conflict raised in Marcus and Phoebe’s previous episode has developed into this story’s major theme. Blood rage aside, almost every one of the season’s plots can be traced back to the divisions between the three species: Kit and Louisa, Father Hubbard, Philippe, baby Margaret… suspicion between witch, vampire and daemon runs through them all. All season long, we’ve been watching these divisions slowly erode (or in Philippe’s case, erode faster than a block of ice on a burnt Looney Tunes behind) as characters unlearn their prejudices thanks to the union of Matthew and Diana. When those two broke the covenant in season one, it knocked a few bricks out of the edifice of tradition; now Marcus and the rebel alliance want to demolish the whole thing. More power to them.

The creatures gathering under the banner of unity in Sept-Tours might have been inspiring, but it didn’t help to give this finale the momentum it needed. The 1591 scenes were mostly a stop-start series of teary goodbyes. Diana’s reunion with Stephen fell flat, and lacked the emotional intensity of Matthew’s parallel scenes with his own dead father, which conveyed a good deal more. And after the intimacy Diana and Matthew reached over their last year, culminating in that heady moment at the close of the previous episode, her secretly forming a pact with Father Hubbard felt as though we’d gone right back to the start.

As indeed, we kind of had. The long sought after book was left behind, having refused to give up its secrets. Jack was palmed off on a noble household. The loose ends were tied up in ways that made Diana and Matthew’s time walk seem almost unimportant, which isn’t where you want to be after a lengthy narrative journey. Had we seen a bit of that 10-knot power in action, maybe it all wouldn’t have felt so arbitrary.

Though we learned that Rabbi Loew was the likely source for the page of the book sent to Diana at the end of season one, that the mysterious Benjamin Fuchs is Father Hubbard’s sire, and how Sophie’s family comes to be in possession of the white queen chess piece, this finale solved few other mysteries. The identity of the Blood Rage killer is still unknown, but were were shown a glimpse of his face.

Satu’s return was perhaps the biggest disappointment, and barely even a story beat. The Finnish witch whose journey into her powers mirrors Diana’s own, showed up just long enough to exchange a few hammy words with Knox and tell him that his confidence would be his downfall. Fingers crossed that she’s right. His confidence and, with any luck, a full quiver of those fire arrows Diana’s able to manifest. Maybe a snake or two.

A mixed ending then, anti-climactic and frustrating in parts, but with a good deal of promise for the future, not least in Diana and Matthew’s pregnancy. Perhaps it’s best to keep Matthew’s words in mind when it comes to the bittersweet, and concentrate on the sweet.