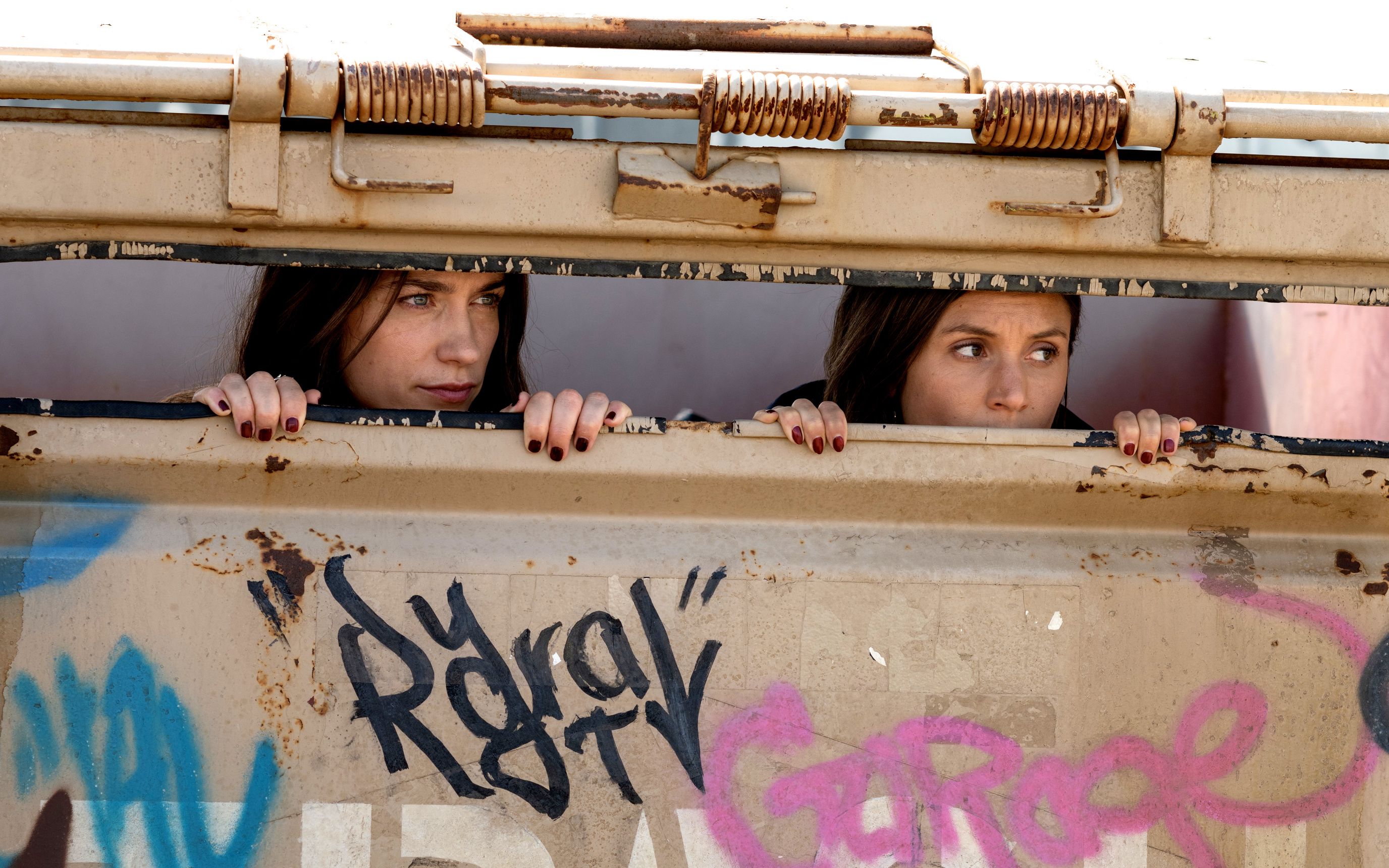 Oh, to be a fly on the (probably Zoom) wall of the Wynona Earp writers’ room during the brainstorm session about which Halloween costumes each character should wear in this autumnal holiday-themed installment! Reader, they nailed it. Wynonna dresses as feminist hero Britney Spears (compliment of Waverly for both bringing the costume together and knowing that Wynonna would be into it), and Wonder Woman. Doc is bisexual icon Freddie Mercury. And Waverly… well, Waverly is a ladybug and then an angel. It’s all beyond perfect, and epitomizes just how much fun this slasher episode of Wynonna Earp truly is. (Barring the sob story Varun Saranga is strapped with selling, but we’ll get back to that later…) Two episodes, and Wynonna Earp Season 4B continues to be… just an incredibly good time? There is a time and place for Important Television, and Wynonna Earp sometimes ducks into that intersection, but I don’t think we talk enough as a culture about the importance of fun, especially in such dark and draining times. I didn’t know how much I needed more unabashedly fun TV until Wynonna Earp came back into our lives, welcoming us all back to the party. And, friends, more than a year into this pandemic, we are all overdue for a party.

This series has had Buffy the Vampire Slayer in its narrative DNA since the beginning, but never is it more apparent than in these delightful supernatural problem-of-the-week episodes. Last week, it was a love virus. This week, it’s a homicidal scarecrow with the head of a pumpkin, the hands of Freddy Krueger, and the focus of an Olympic athlete. Rotten Jack is his name and he’s been a rural myth in the town of Purgatory since the Earps were little kids, spending Halloween trying to avoid their abusive father. It says a lot about this town and the Earp family that an active supernatural killer on the loose is enough of a regular occurrence that literal angel Waverly attempts to eschew the responsibility of tracking him down because she has plans to hang out with her sister. But it’s hard to judge a grown woman so unabashedly wearing a ladybug costume, especially when she is so devoted to hr big sister. Maybe it’s low-hanging fruit for a reviewer and fan who is best friends with her own sister, but, for all of the other amazing relationships on this show, Wynonna Earp has always had the sibling bond between Wynonna and Waverly at its heart and it’s touching to see that, even when these two can’t remember their own names, they remember the love they have for one another.

Yes, that’s right. Waverly and Wynonna straight-up lose their memories. Wynonna may be able to remember whiskey, but she has no idea what Peacemaker is for. This is all thanks to Casey, who you may remember as Wynonna’s half-demon cellmate in “Look At Them Beans.” When Wynonna and Waverly go to Casey’s trailer, per Jeremy’s BBD instructions, in order to pick up “the extractor,” a necessary item for capturing Rotten Jack, Casey freaks out. He’s gone full conspiracy theorist off-the-grid-er since we last saw him (which, fair enough), and doesn’t want anything to do with BBD. He runs away from The Sisters Earp, leading them into the amnesia-inducing fog that apparently surrounds all of the Ghost River Triangle. What follows is basically a delightful excuse for Melanie Scrofano and Dominique Provost-Chalkley to get silly as Wynonna and Waverly traipse around town, in search of a Halloween party, with no idea that demons or vampires are even a thing or that they are supposed to be all that stands between Rotten Jack and the people of Purgatory.

Meanwhile, Amon has graduated from morally-ambiguous antagonist to straight-up villain. And I’m not just saying that because he tries to use the fact that he had sex with Wynonna to manipulate Doc into doing what he wants. (It doesn’t work.) In an effort to make some serious cash, Amon sets up a betting pool livestream around the identities of Rotten Jack’s victims, pivoting to auctioning off the chance to kill the Earp sisters when the opportunity presents itself. I wish this turn had a bit more nuance—I’ve never really been sure of who Amon is as a character or what Wynonna Earp was trying to do with him—but his commitment to villainy does provide structure for the rest of our characters to rail against. It gives Jeremy a chance to team up with Doc to save Wynonna and Waverly, and gives Doc a few instances to reiterate his commitment to the Earp sisters both through his actions and his words. He and Wynonna may not have worked things out, but that doesn’t mean she isn’t the love of his life.

Jeremy and Robin’s tragic backstory knocked this episode down a half-star for me. While I understand the necessity of recasting a role from time to time, I am 100% of the opinion that I would rather the series act as if they are the same human rather than come up with a face-tearing backstory that is both unnecessarily gruesome and too silly even for this show. We already suspend disbelief when it comes to the existence of vampires, demons, demon-hunters, angels, and Cupids on this show; what’s a little recasting amongst friends? Then again, I have always been willing to lean into a recast. Maybe it’s because I am a Doctor Who fan?

That being said, I am also very invested in the angst when it comes to Jeremy and Robin’s ongoing love story. They obviously still share a connection, even if Robin can’t remember their dating history and currently has a boyfriend who is not Jeremy. I am torn between the pull of the amnesia romance trope and the fact that Jeremy is basically slipping drugs into his ex/co-workers’ support group coffee. On the one hand, my fanfic-reading heart loves a good pining amnesiac exes-to-lovers story; on the other hand, it is deeply problematic that Jeremy isn’t giving Robin the option of taking the serum. Robin is an amnesiac; he’s not a child. (Not that you should drug your children’s coffee, either.)

Taking bets: do we think Amon is dead or will we see him again?

Everyone loves Doc, and it makes total logical sense.

Wynonna’s “walk of shame” look works better than it has any right to.

R.I.P., random Purgatory residents killed by Rotten Jack. I’m not sure what the town’s population looks like at this point, but the loss of three residents ain’t nothing.

“Can you just let me petty.”

“Are you late for school?” “Whore school?” The line delivery here.

“You’re supposed to be the nice one.”

“I already wear a mask everyday.” Still not clear on the logistics of Robin’s new face, but I honestly hope the show never tries to explain it.

“I just want to go trick or treating.” It’s super interesting that, when Waverly and Wynonna lose their memories, it’s Wynonna who loves Halloween and Waverly who hates it. Presumably, this is how they really feel about the holiday.

Justin Kelly, aka the first Robin, is now on a show called Hudson & Rex, which seems to be a show about a cop and his police dog. (The new Robin is played by Jim Watson.)

“I’m not a hero. A fuck up.” “You can be both.” I love how they just slipped the thesis statement for this show into the dialogue of this episode and hoped nobody would notice.

“Love is the absolute of fear.” “Love has always lightened the load.” If Doc ever needs a side hustle, he should consider motivational life coach. But, really, we need to talk about how sweet talk is one of Doc’s legit superpowers. Between his pep talk to Cleo last week and his pep talk to Casey this week, he’s on a roll.

“She’s my most important thing.” “Gross.”

Was this episode the best Wonder Woman movie of 2021? Yes or yep?

Doc helping Waverly off the stage?

“You’re hilarious. We can’t even get the popcorn machine to work.”

This mind fog is spreading? This isn’t going to be good for the cat cafe…

“You are and have always been my hero.” “It’s easy when you know exactly what you’re fighting for.”

“Mind if I steal her for a minute?” “A minute? Woman, you better make her happy for the rest of her damned life.” Nicole didn’t get a lot of screen this episode, but boy does she make the most of it.

Rotten Jack is played by Kelsey Andries, an actor and stunt performer. She does a very good and creepy job bringing this supernatural horror to life.