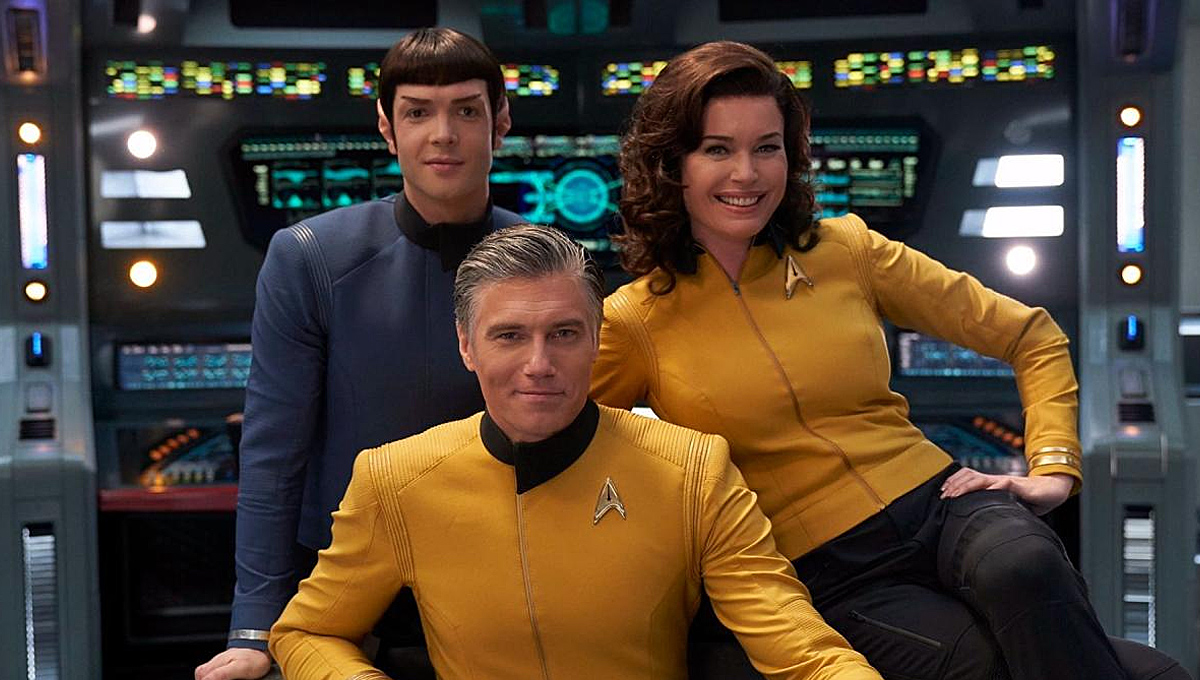 Star Trek: Strange New Worlds is poised to serve the quintessence of the spacefaring franchise: The voyages of the U.S.S. Enterprise—albeit during the captaincy of James T. Kirk’s immediate predecessor, Christopher Pike (Anson Mount). The Paramount+ series—spun off from Star Trek: Discovery—has announced the start of its production and revealed its primary cast. Interestingly, one newcomer in particular bears a noteworthy resemblance to a forgotten character from original Star Trek pilot “The Cage,” whose general era this series will showcase.

An announcement by Paramount has officially welcomed Star Trek: Strange New Worlds cast members Babs Olusanmokun (Dune, The Defenders), Christina Chong (Line of Duty, Black Mirror), Celia Rose Gooding (Broadway’s Jagged Little Pill), Jess Bush (Playing for Keeps, Les Norton) and Melissa Navia (New Amsterdam, Dietland). However, the characters this new quintet will portray have yet to be revealed. While the majority of the diverse bunch do not seem to line up with established characters from “The Cage,” blonde-haired, blue-eyed Aussie actress Jess Bush just might be the exception. Indeed, she resembles a character named Yeoman J.M. Colt (as only indicated in the script), who, played by Laurel Goodwin, was prominently featured in Gene Roddenberry’s initial attempt at a Star Trek pilot, but never manifested again.

Of course, the core trio of Strange New Worlds consists of spun-off characters Captain Pike (Mount), Science Officer Spock (Ethan Peck) and the ship’s first officer—best known as Number One—Una (Rebecca Romijn). It’s a lineup of bridge officers that matches what was showcased in the 1965 would-be pilot—in which they were played by Jeffrey Hunter, Leonard Nimoy and Majel Barrett, respectively—amidst an array of laughable early-1960s quasi-future aesthetics (its planet surface scan that spat out perforated printer paper remains hilarious). However, there are notable vacancies from that Enterprise’s crew, which also consisted of the drink-sharing Dr. Philip Boyce (John Hoyt), Lt. José Tyler (Peter Duryea) and the aforementioned Yeoman Colt (Goodwin), who was essentially a prototype for Grace Lee Whitney’s Yeoman Janice Rand.

With that set, let’s start with what we do know. While “The Cage” was not part of Star Trek’s initial NBC airing (it wasn’t released in full form until 1986), its events were nevertheless canonized when footage from it was used to present a backstory for the present state (in the year 2267) of the grievously-injured, wheelchair-bound Captain Pike (Sean Kenney) in 1966 episodes “The Menagerie” Parts I and II. Thusly, the events of the nixed pilot were retroactively reset thirteen years earlier, in 2254, after which the Strange New Worlds-setting events of Star Trek: Discovery Season 2 (which even included Melissa George’s modern revival of Susan Oliver’s “Cage” character Vina,) revisits the Enterprise three years later in 2257. Consequently, we won’t necessarily need to have the entire character lineup return here, since—just as with anything in life—people move on to new endeavors and/or assignments in Starfleet. After all, we know that Pike will eventually (by 2265) give up that big chair to a certain fast-rising young officer named Kirk.

Since Star Trek: Strange New Worlds takes place only a handful of years after “The Cage,” it stands to reason that some of the crew from that era will still be assigned on the Enterprise, which makes the notion—speculative as it may be—of Yeoman J.M. Colt being on the series quite feasible, especially given Jess Bush’s clear resemblance to that classic character. Moreover, Colt’s prospective presence could add an intriguing romantic element. Indeed, a love triangle of sorts was teased in “The Cage,” when Talosian leader the Keeper—who wanted the captives to have children—read the minds of the Enterprise’s captured away party, and tactlessly divulged to Pike, “The female you call ‘Number One’ has the superior mind and would produce highly intelligent children. Although she seems to lack emotion, this is largely a pretense. She has often had fantasies involving you.” Afterwards, he reveals of Colt, “The other new arrival has considered you unreachable but now is realizing this has changed. The factors in her favor are youth and strength, plus unusually strong female drives.” It’s a brief, but consequential exchange that seemed to hint where Roddenberry might have taken this unrealized iteration of Star Trek regarding its crew dynamic.

It will certainly be interesting to see how Star Trek: Strange New Worlds tackles this revered era in the franchise’s timeline, especially if it attempts to establish its own identity amidst the array of existing lore beyond “The Cage.” Will the series have the temerity to introduce Kirk, who’d only be a few years out of Starfleet Academy at this point? Will we get an official live-action introduction to the Enterprise’s first captain, Robert April, who later became an Ambassador-at-Large, and even returned in an episode of Star Trek: The Animated Series? Based on what we’ve seen of the early dynamic on Discovery—notably with Anson Mount’s acclaimed performances as Pike—it seems to be in good hands.

Star Trek: Strange New Worlds doesn’t have an official release date as of yet. However, the show is now in production, which makes a premiere on Paramount+ possibly by late-2021 quite promising.