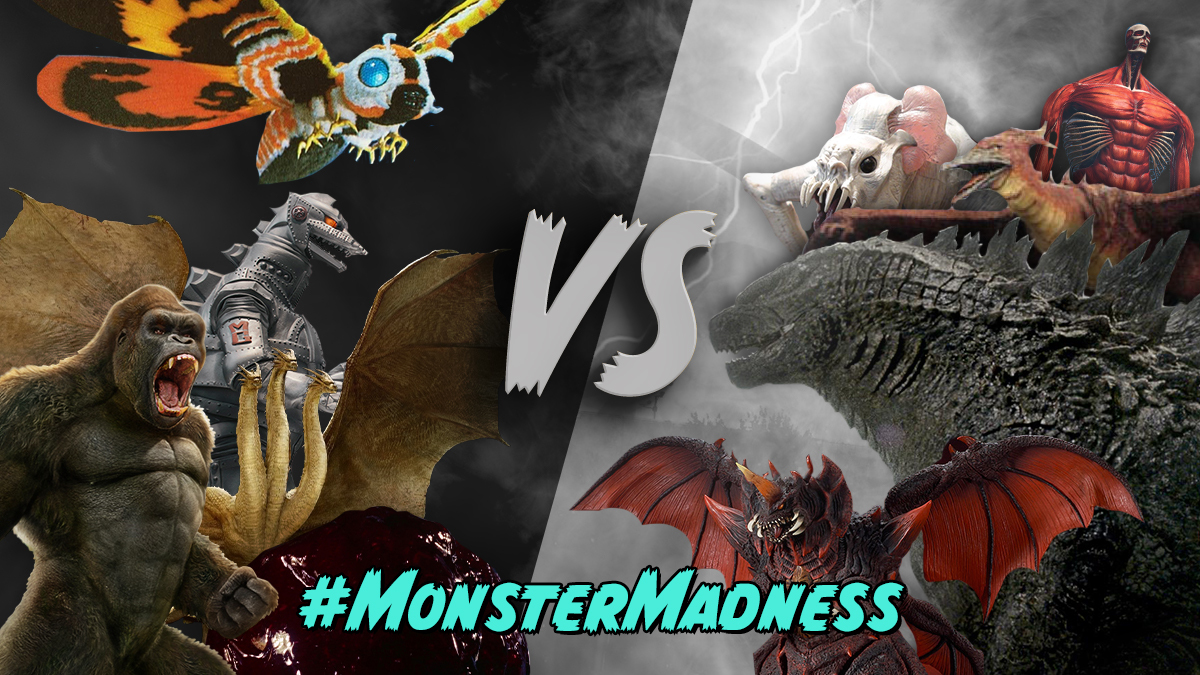 Every season is monster season in our hearts. But this March is a particularly good time to celebrate our enormous, scaly, and/or hairy friends. In the film world, the long-awaited Godzilla v. Kong arrives on March 31. Meanwhile on television, the final season of behemoth anime Attack on Titan is in the midst of its final season right now. Given that many of us are already primed for bracketology in March, we decided to create a bracket of our 32 favorite monsters for you, the monster-lover, to vote on.

In honor of Godzilla, Kong, and Attack on Titan’s many titans, we’re electing only to include kaiju-style monsters on this bracket. All of these monsters must A. be their own distinct individual (not a species like “cave trolls” or “aliens”) and B. be able to knock down a building (or at least cause catastrophic structural damage). That’s why you won’t see any Universal-style monsters (Frankenstein, Dracula, et. al) on our list.

If you’re unfamiliar with how a bracket works, never fear – each round we will present monster matchups one-by-one for you to vote on via our Twitter and within this post. The rules here are simple: peruse our list of 16 matchups and vote for your favorite monster. And whether “favorite” means “which monster would win in a fight” or “which monster I like the most” is up to you.

Whichever monster receives the most votes will advance to the next round to face another victorious monster. This will lead to five total rounds with round 1 featuring 32 monsters, round 2 having 16, round 3 having 8, round 4 having 4, and round 5 having 2. The full voting schedule will be as follows:

With the monster rules and arena set, let’s get into the round 1 matchups!

You know that saying “if you come at the king, you best not miss?” Well in this monster bracket, Godzilla is the king. The big lizard is the iconic kaiju, having appeared in over 30 films and countless other bits of media. Who dares challenge his monster supremacy? The Blob. The Blob is…well, a blob. Best of luck!

Though Godzilla may be the king of monsters, only one kaiju is bold enough to include “King” in its name. That would be King Ghidorah. This three-headed beast first appeared in the fittingly named 1964 film King Ghidorah, the Three-Headed Monster. He’s appeared in multiple eras of Godzilla films as an enemy to Godzilla and Mothra. Opposing Ghidorah is Destoroyah, an unholy combination of crab, insect, and bat.

Kaiju movies are happy to turn just about anything into a terrifying monster. Case in point is the plant monster Biollante. Despite its rosy origins, Biollante is a fearsome foe to all. Meanwhile the Colossal Titan can knock down just about any wall put in front of it. He’s not the most dangerous titan in Attack on Titan, but he’s unquestionably the most iconic.

Yongary looks quite a bit like Godzilla and that’s by design. The monster was introduced in 1967’s Yongary, Monster from the Deep to rival the success of the iconic monster. Suffice it to say, Yongary did not reach Godzilla heights, but he’s still pretty cool. Its opponent Quetzalcoalt comes from the 1982 film Q: The Winged Serpent. In some ways, Quetzalcoatl is the American answer to Godzilla, drawing from Aztec myth to create a winged beast.

Only one monster can challenge Godzilla’s claim to the monster throne. And that’s the MONKE. First appearing in the 1933 film bearing his name, King Kong pre-dates Godzilla by 20 years. He comes from a simpler time where monsters could exist naturally and not as a byproduct from man’s vile nuclear experiments. King Kong rules. Trying to take the gorilla down is El Blanco, a notable graboid from the Tremors film series.

What could possibly take a big nuclear lizard down? The answer is so simple it’s been staring us in the face all along: a ROBOT lizard. Mechagodzilla was first depicted as an alien in the 1974 film Godzilla vs. Mechagodzilla. Since then he’s frequently turned up as a mechanical creation from mankind to keep Godzilla in check. And he does a decent enough job to be considered Godzilla’s archenemy. In this matchup, Mechagodzilla is opposed by Hedorah – who is just a big ol’ pile of toxic sludge.

Anguirus holds the honor of being the first monster to go toe-to-toe with Godzilla in battle. It didn’t go well for the massive Ankylosaurus but that didn’t keep him from becoming a mainstay in the Toho Godzilla movies. Meanwhile, Stranger Things isn’t hurting for notable monsters, with the Demogorgon being the most well-known. It’s only season 4’s The Mind Flayer, however, who has the strength and size to compete in this tournament.

The Kraken has had quite an impressive pop culture run. Who could forget Davy Jones crying “release the kraken!” in Pirates of the Caribbean? The Clash of the Titans version of this monster (both in the 1981 film and its 2010 remake) is undoubtedly the most fearsome. Opposing the Kraken in this competitive 4-5 matchup is the unnamed monster (oft nicknamed “Clover”) from the 2008 found footage movie Cloverfield. Viewers don’t catch many glimpses of Clover but when they do it’s clear he’s among the biggest and most dangerous monsters in the film canon.

Mothra is undoubtedly the most famous monster to come out of Toho’s kaiju films aside from Godzilla himself. As her name implies, Mothra is an enormous flying insect inspired by the “imagos” of silkworms. While many of the monsters in this bracket are destructive and villainous by default, Mothra is actually pretty chill and at times darn near heroic. Furred weirdo King Caesar draws the unenviable task of taking Mothra down.

Aside from the sprawling Godzilla franchise, Guillermo del Toro’s Pacific Rim provides the most potential monster candidates for this list. Given that they’re all confined to one film, however (and make no mistake: there is only one Pacific Rim movie), we’ve opted to choose the most powerful PR kaiju to represent them all. That honor goes to Slattern, the biggest and baddest subterranean monster our heroes encounter. In the other corner is the Rancor (named Pateesa) from Star Wars – Return of the Jedi. Pateesa can be pretty fearsome…as long as there are no gate doors above him.

H.P. Lovecraft’s Cthulhu is one of the most terrifying monsters in all of literature. In fact, Cthulhu’s appearance is said to be incomprehensible and enough to drive men mad. Well, movies and television have had little issue depicting the Great Old One, with him frequently appearing as a squid monster in everything from 2020’s Underwater to a series of South Park episodes. Lovecraft’s version of Cthulhu would probably be unbeatable, but the film and TV version of him is a fair match. It’s up to Monster X, a skeletal kaiju from 2004’s Godzilla: Final Wars, to take Cthulhu down.

Most of the monsters in this tournament fall a bit short of human intelligence. That is not the case for The Hobbit’s massive dragon Smaug. Smaug is a clever fire drake and possibly the last great dragon in Middle-Earth. He can cause some real destruction, if he can be bothered to leave his treasures unguarded. Meanwhile, Gwoemul is the creature from Bong Joon-ho’s 2006 The Host. It’s also quite smarter than any fish monster has a right to be.

When it comes to Monster Madness battles, the ability to fly is never a bad thing. And that’s partially what makes Toho all-star Rodan so effective. Rodan is one of the Godzilla studio’s “big five” alongside Godzilla, Mothra, King Ghidorah, and Mechagodzilla. That place of honor is well-earned for the irradiated Pteranodon. Rodan has the strength and the skill to go far in this tourney. The eight-seed that will try to stop him is the demon from 1957 British horror film Night of the Demon. Like the Cloverfield monster, this demon is little-scene but still quite powerful.

If you want a sleeper monster on this bracket, look no further than Gamera. This giant prehistoric turtle is a mainstay in kaiju movies and is often known as “The Friend of All Children” or “The Guardian of the Universe.” Alongside Mothra, he is one of the very few monsters willing to stick up for the little guy. His competition, Zigra, on the other hand is a total dirtbag. Gamera and Zigra’s matchups go way back to the 1971 film Gamera vs. Zigra. Gamera handled Zigra quite easily then. Can the loveable terrapin succeed again?

Megalon is a mainstay of monster comics who has also enjoyed a couple of film appearances. He’s yet another insectoid-style kaiju but he also brings some awesome drill arms to the table. Opposing Megalon this round will be Gyaos. Gyaos is a bat-like kaiju who first got a shot at monster-stardom in 1967’s Gamera vs. Gyaos. He was treated quite shabbily in that but perhaps he has a shot against this new opponent.

This bracket already had some alien cyborg representation with Mechagodzilla but you know what they say “you can never have enough alien cyborgs.” Thankfully, Gigan is around. This red-eyed, be-chromed monster first appeared in the 1972 film Godzilla vs. Gigan. He’s since popped up in several more movies to give Godzilla a hard time. The monster that hopes to take Gigan down is Reptilicus, a sea serpent, who hails from a 1961 Danish-American movie bearing his name.