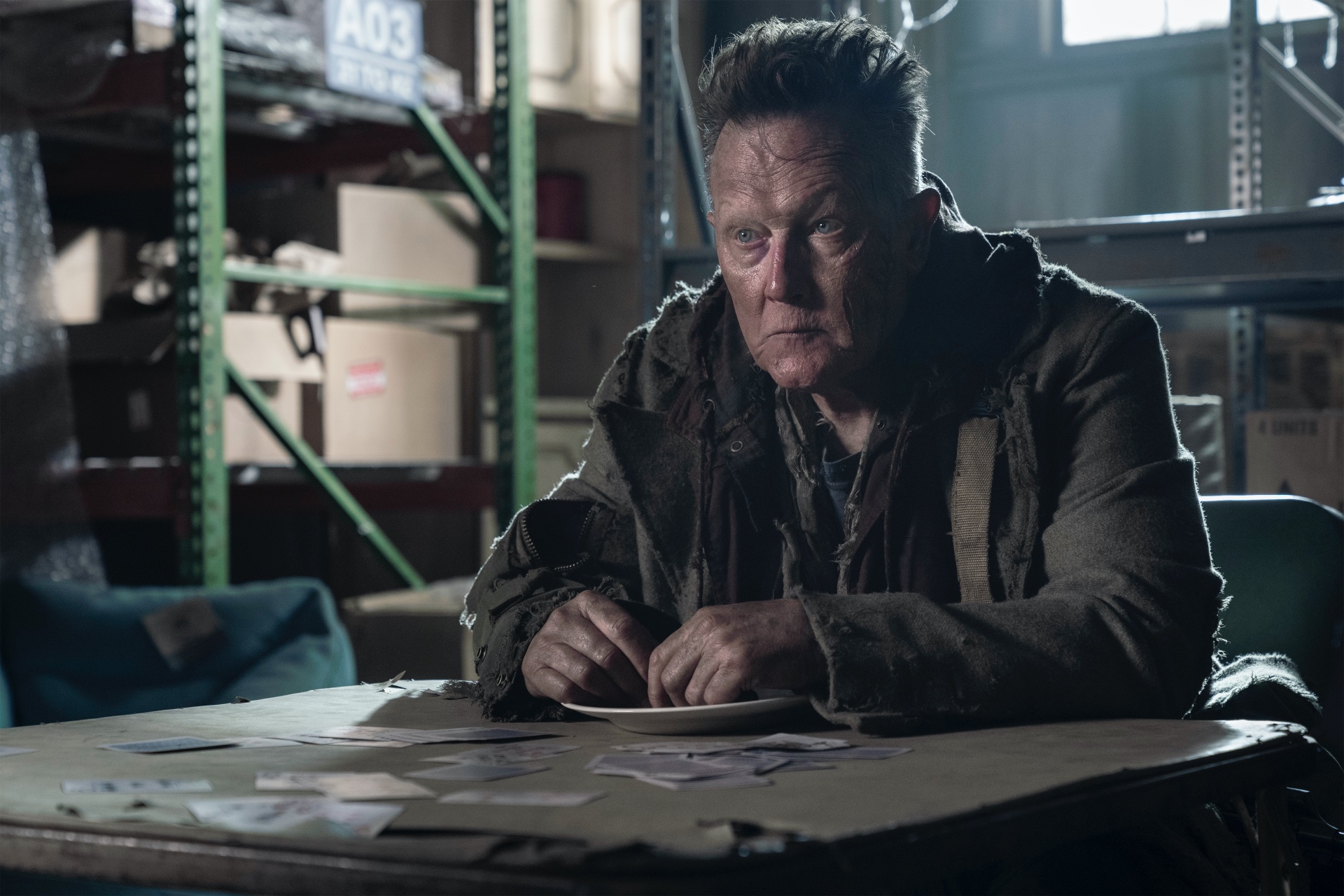 This article contains spoilers for The Walking Dead season 10 episode 19.

The impact was immediate, even before you could see his face. Aaron, missing after a long night of drinking and boar meat. Gabriel, hung over and searching for his friend. And there, at the end of a long row in a warehouse, backlit by the sun, stands an imposing figure wearing a hood and cradling the unmistakable profile of a rifle. Even before you see the man’s scarred face, he’s already established himself as someone to take seriously.

The man, played by the incredible Robert Patrick (of Terminator 2: Judgment Day, The X-Files, and many other notable roles) is not introduced until the very end of the episode, but he is pretty clearly someone pushed to his limits by the effort it takes to survive in the world of The Walking Dead. Robert Patrick plays Mays, no first name given, who forces Gabriel to sit at the table at gunpoint and engages in a philosophical debate with the pastor turned community leader after first eating a meal of pork and whiskey. As it turns out, Mays is far more than just a cantankerous person who has been alone far too long. When he pulls Aaron’s metal arm weapon out of his bag and throws it across the room, it’s clear that he’s more than just big talk. Mays maintains that he’s harder to bluff than Aaron is during the card game.

To carry the poker metaphor further, Mays is playing for keeps. His game of choice? Russian roulette, with a side of ontological debate.

It’s about enlightenment, Mays says, as he watches Gabriel put a gun to his head and pull the trigger. With every snap of a dry fire, the tension grows, as Mays, Gabriel, and Aaron have a three-part conversation about the nature of humanity. Mays, who heard everything Gabriel and Aaron were talking about the evening before, points to Gabriel’s drunken muttering as proof that God does not exist.

All people are inherently evil going by Mays’ argument, which forces Gabriel and Aaron to argue the opposite to him as he yells, cajoles, taunts, and hectors the two of them into passing the gun and pulling the trigger, time and time again. What Mays seems to want is one to turn the gun on the other, to satisfy some sick sociological supposition Mays has constructed while on the road during the apocalypse.

Aaron and Gabriel make the argument that sometimes, things just happen to people, like Aaron’s crushed arm and Gabriel’s infected eye. Nobody did anything evil to cause them injury; sometimes, it just happens, and with every squeeze of the trigger with the gun aimed at themselves, the two men prove that point. They’re family, Aaron says, and act accordingly, which allows Mays to get to the incident that soured him on the world, and on people in general. His brother turned on him, took a knife to his face during a fight over a few crusts of food. Mays says he took care of it.

Mays pushes harder. The cylinder spins and lands on the bullet; Mays crows over it, because it sounds different than the chamber being empty. He pushes Aaron to kill Gabriel, or kill himself, asking Aaron if he wants to see Gracie again. Aaron defiantly puts the gun to his temple, only to be stopped at the last minute by Mays, who seems to think he’s proven his point until Gabriel goes to work on him, using every lesson he learned at seminary and in the company of his mentor Reverend George. He meets Mays where he is, letting him know that he was wrong, that the people of Alexandria are good, that broken people can be fixed. He works his pastoral magic on Mays, swaying him and talking him back from killing them both. He relents, cutting Aaron free, only to be immediately killed by Gabriel, splattering a stunned Aaron with blood.

There’s no redemption for a man who murdered his own family, even in Alexandria. No matter your theology, some sins can’t be easily washed away even by a blood sacrifice. Except, Mays’s version of events might not be accurate. He had heard every word they had talked about, seen their every move, so he must have some sort of secret hiding place. He does; through a trap door on a second level of the warehouse, Mays’s biggest secret is revealed. His brother, driven crazy and chained to a wall, is alive. His wife and child, however, are not.

The other Mays, disheveled, babbles a mantra: “he made me play.” One self-inflicted gunshot wound later, and both Mays twins are no longer trapped in a world that broke them. That leaves Aaron and Gabriel to put together the pieces.