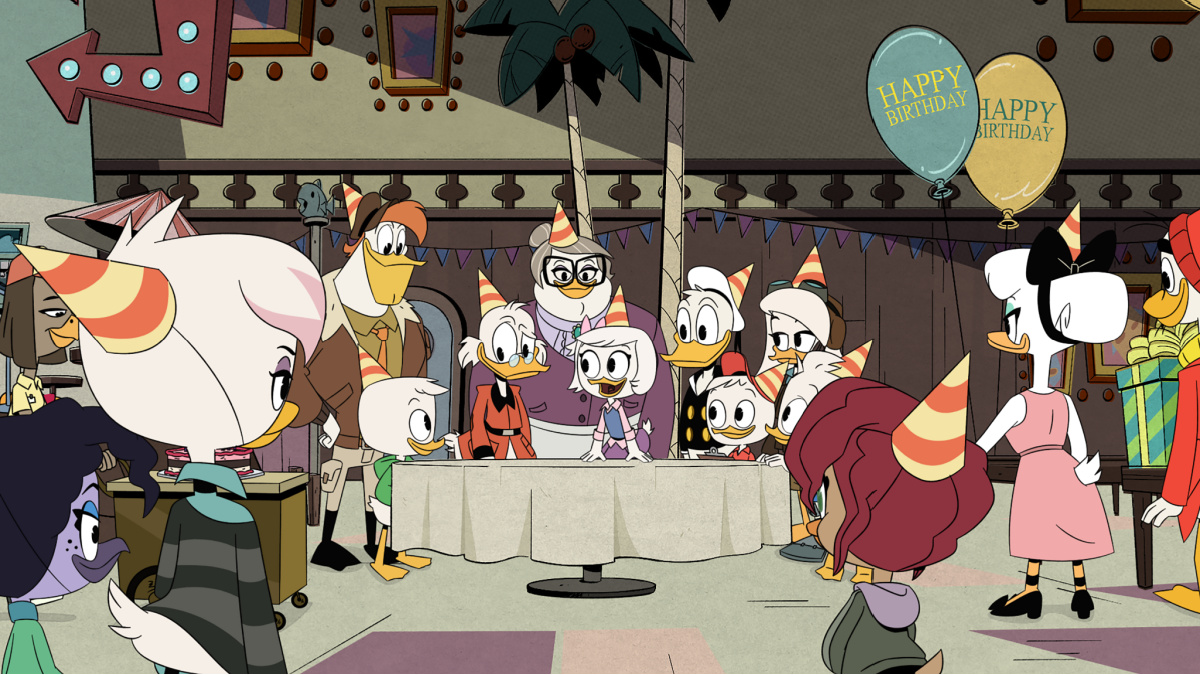 This DUCKTALES article contains massive spoilers for the finale.

Nothing can stop DuckTales. That applies not just to the characters of the series but the crew behind it. Throughout the run of the series they not only redefined DuckTales for a new generation but also crafted a beautifully woven story that developed every single one of its cast of characters. Along the way they also brought back other beloved Disney TV classics like Darkwing Duck, TaleSpin, Rescue Rangers, and even mega deep cuts like Fluppy Dogs.

They pulled all that off but the finale presented the crew of DuckTales with their biggest challenge yet. They had to wrap up the shows many plotlines while also giving its huge cast of main and supporting characters time to shine… all in just over an hour. This would be near impossible for most shows… but nothing can stop the crew of DuckTales.

The writers, artists, and everyone involved in the series pulled out every single stop they could and created one of the absolute best sendoffs for an animated series ever. Nothing felt rushed. Everyone got a chance to shine. The major plots were resolved. They even managed to get in another Disney tribute with an incredible Gargoyles bit!

We sat down with executive producers Matt Youngberg and Francisco Angones to learn how they and the rest of the DuckTales crew managed to pull it all off.

DEN OF GEEK: On DuckTales you typically have a large group of writers come up with the story and then one or two write the script. On the finale you’ve got five writers. How do you write an episode with that many people working on the script?

FRANK ANGONES: I think all of the writers love the characters so much that everyone wanted to have a shot at it. We always break every episode altogether. It’s why everyone has story by credit. We really go and put it through its paces and pitch all the jokes but there’s so many storylines on this one.

We’ve broken episodes that are two-parters as individual episodes before. I think the Moonvasion!, the season two finale, we did break as an hour long. (We broke it) as one story instead of two separate stories.

That’s something I noticed, you’re not just balancing the main story of the movie but also all the characters, all the references, tying all the stories off. How do you keep all that balanced without it tipping too much into “reference everything!”

MATT YOUNGBERG: It’s a feat. It is a balance act.

ANGONES: There are some sizable set pieces that unfortunately ended up on the cutting room floor because of that. We wanted to make sure that nothing felt too overpowering. But I think part of it is that this is the story that we’ve been gearing up to tell since the pilot. We always knew this is where the series was going.

As we were starting season three, assuming that it would more than likely be our last, the idea of most shows when they know they’re ending is they want to put the characters to bed and figure out what the nice resolution for them is. But these characters have been around a long time before us. They’re going to be around a long time after us. Some are new, some will be around for forever.

So we looked at this whole season of structuring it as we’re putting everybody in the place where they know what their next step is. They’re going to go off to their next thing. You know where Lena goes from here. You know where Scrooge and his family go from here. Of course, they all died in the finale, so they’re not going anywhere. (laughs)

That found family is obviously a huge theme for us and it all coalesced and came together. The big thing obviously, Huey has this huge revelation arc. His crazy obsessive brain breakdown and trying to solve this ultimate mystery of the series. We had a Webby story that we were telling. We had a Launchpad story that we were telling from the very beginning of the series in the background. So to be able to pay those off in such a big way, it was exciting.

Speaking of that bigness, DuckTales has had incredible animation but this movie was even a step beyond that. Talk about the storyboarding and production process that helped take this movie over the top?

YOUNGBERG: Our ethos from the beginning was to make sure that we were delivering a show that lived up to the legacy of DuckTales. The original DuckTales had some of the best animation on TV at the time. As we went into the series itself, we said we need to hire at least one in-house animator who’s going to help assist the overseas animation studios and elevate the material every episode. Over the seasons, that grew. We had three or four people working on it at the end, just in-house. But then the overseas studios fell in love with the show as they worked on it, and they put more and more and more into the show. They realized at the end this is a big family. We want to blow it out. So they really set it up and made sure that they were delivering the best quality, and everybody recognized the importance and worked really hard.

From top to bottom, it was just everyone working so hard from the storyboards. For everybody there was just this feeling of, this is our last story that we get to tell. We are in love with the story and we want to make sure that we make the best thing we can. And it was one of the only episodes that was directed by me. So, I mean… (laughs)

ANGONES: And I will say it was the second most important pitch of DuckTales. First most important pitch for DuckTales was convincing Disney to let us make DuckTales. And the second most important one was… we knew that the series was ending. We had written and prepared for that, but the crew didn’t know. So we had this meeting because the fear is when you find out that you’re ending, well, then everybody’s like, “Oh, that’s a bummer.” Everybody goes off, has to find their next job, has to find their next thing.

It’s hard to keep that momentum going through the finale, but our crew was such an amazing family. They were such a great team. So in the meeting where we all came in and we told them, “Hey, listen guys, season three is going to be our last”, Matt and Suzanna (Olson), our producer, very wisely said, “Let’s pitch them the finale in that meeting.” So (at first) everyone got really sad. And then we pitched them the story of the finale and everyone was like, “We’re going to blow this out.” It became a personal passion project. So much of this show was about collaboration. And to get everybody on board from the beginning instead of just getting a script down the line (in the production process). I mean I’m 40-what now? Getting everybody on board with what it was was part of the secret sauce that made DuckTales what it was.