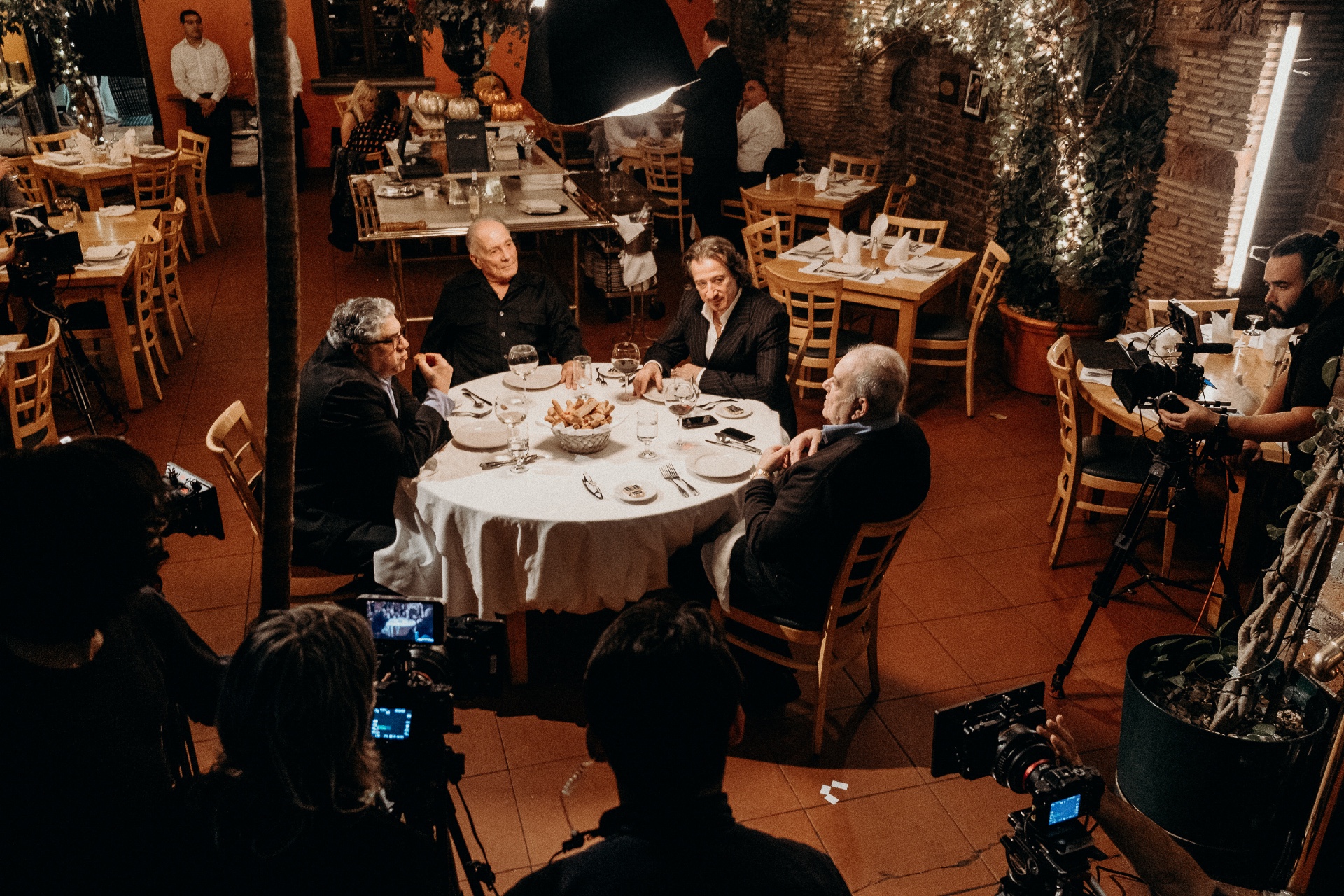 The whole idea of big Sunday dinners in Italian homes may seem like a cliché, but someone’s pouring tomato sauce on top of onions and garlic fried in olive oil on stovetops every weekend. The Sopranos, both the series and the two families at the center of it, brought just desserts every Sunday night to homes across America. Although, Carmela (Edie Falco) had been known to show up at neighbors’ homes mid-week, unannounced, with ricotta pie. It is only fitting that the main setting of Celebrating The Sopranos are fine dining establishments.

Consisting of three separate films, Celebrating The Sopranos is a series of conversations held by critics Matt Zoller Seitz and Alan Sepinwall, and cast members Federico Castelluccio (Furio Guinta), Arthur J. Nascarella (Carlo Gervasi), Vincent Pastore (Salvatore “Big Pussy’ Bonpensiero), and Vincent Curatola (Johnny ‘Sack’ Sacramoni), in restaurants that meant something to the show. For dessert, they serve up an interview with the creator, David Chase, but he only drinks coffee. This is doubly sweet because Chase doesn’t grant many interviews.

The conversations are cordial, which doesn’t add to the mythology or provide new insight. Even casual fans of the series have spotted the actors working together in some form or another in earlier works. We’re not surprised by the respect they show for Edie Falco, who does not have a seat at the table. But things heat up when the actors break omerta. That’s one of the things you have to love about actors who play gangsters: they break the vow of silence as easily as they break off the ass of a loaf of semolina bread to scoop up a stray sausage.

Revenge is a dish best served cold, according to the old Sicilian proverb. But the cast dishes out old grudges warmly. They name names and wink at the camera. They offhandedly drop who James Gandolfini, who led the “glorified” Jersey crime crew as Tony Soprano, thought was a pain in the ass. They mention people who never should have been on the set in the first place, and how you’d be lucky to catch Joey Pants (Joe Pantoliano) wearing pants off camera. The actors talk about who got paid by HBO, and who went without pay to make sure everybody got to wet their beaks.

Vincent Pastore breaks down during questioning giving us some insight into the actors relationship with HBO. His character, Salvatore “Big Pussy” Bonpensiero, was a rat and a lesson to every character and actor on the show. He was the first major character to get killed off. Big Pussy’s execution taught the audience not to get too close to any of the characters. Look how close Bonpensiero was to Tony. It broke Paulie’s heart. Silvio was beside himself. But Big Pussy had to go.

It became a trend on HBO. They started killing off characters left and right. The Red Wedding sequence in Game of Thrones is nothing if not a major character culling. Nobody’s safe on HBO, characters or actors, and Pastore jokes about getting around that. He carries around a contract at all times, just in case.

Actually, the contract turns out to be a call sheet to an HBO show, and one of the highlights of the documentary is Vincent Curatola, who played New York mob boss Johnny “Sack” Sacramoni, demanding he do a nude scene. It’s an imperative. I don’t know if Pastore will wind up shooting one but, like Curatola, it is something I now need to see. The chemistry between the actors offscreen is no less tangible, and no less dangerous. They’re not out for blood, that’s a terrible expense. But one false word and they are all over each other. They don’t miss a trick.

Matt Zoller Seitz and Alan Sepinwall didn’t miss a trick either. They’ve been reviewing The Sopranos since the show first began airing, and they were doing it for Tony Soprano’s hometown paper, The Newark Star-Ledger. They went on to co-author the book The Sopranos Sessions. The feature length interview, My Dinner with Alan: A Sopranos Session, finds them trying the onion rings at Holsten’s in Bloomfield, N.J., where the last scene of the series cuts to black. Besides hassling the waitresses over cholesterol, “Session 1: The Critics” lets them nitpick the series, the role of psychiatry in mob entertainment, and the origin of Taylor Ham.

“Session 2: The Cast” is served as a four-course meal at Il Cortile at 125 Mulberry Street in downtown New York City. It is also called “The Last Supper” because that Little Italy restaurant was where the cast would take actors after their characters were killed off on the show.

Federico Castelluccio, who played Furio Guinta on the series, occasionally seems like he’s surprised to be at the adult table. He looks visibly shocked at some of the revelations pouring out the mouths of his co-stars. Like a good soldier, he immediately closes rank in solidarity, but it is very revealing just how much he missed while acting. He, like Pastore, is an artist, who is now also directing, but still learning about the politics of TV programming. It was completely refreshing.

But not as much as almost every word which comes out of Arthur J. Nascarella, who played caporegime Carlo Gervasi on the series. He is not the biggest name at the table. He admits his character barely made a blip on the audience, but he’s also got nothing to lose. He says he used to tag along with Pastore to auditions and con his way in. When he told his father he got his first part, his dad went out and got headshots. When Curatola dismisses some of the writers’ choices and asks who made them God, Gervasi says he was happy for every line he got.

This comes in response to one of the new facts we get about the behind-the-scenes doing on The Sopranos. Iconic actor Burt Young put in an unforgettable performance in his one appearance as Bobby Baccalieri Sr. But the series casting people originally wanted Curatola’s father for the part. Another revelation is that none of the cast of The Sopranos will be seen in the prequel movie The Many Saints of Newark, which has been postponed from March to September.

The best part of the documentary is the last segment. David Chase: A Sopranos Session lets Matt and Alan pick Chase’s brain for any memories he hasn’t suppressed. He is very open about how some of the actors blame him for ruining their lives, and gives a lot of credit to James Gandolfini. The star transformed the show, Chase says. He’d originally envisioned it as something like a live-action gangster comedy resembling The Simpsons. But when Gandolfini grabbed Christopher Moltisanti (Michael Imperioli) by the collar for talking about a screenplay, the entire dynamic changed.

Chase is interesting to watch. He doesn’t discount anything. He is a musician and thinks like one. Whether something was intended or not, he immediately is able to affirm an interpretation. While the actors may have bitched about the specifics of scripting, Chase seems like he appreciates happy accidents.

The Sopranos debuted on January 10, 1999, and changed TV. Filmed by Kristian Fraga and the team from Sirk Productions, this three-part feature film documenting the phenomenon is an enjoyable viewing for fans wanting to catch up with old friends. It’s a no-frills affair, there are no action sequences. The most dangerous weapon isn’t even the steak knife, it’s Curatola’s side glances.

Celebrating The Sopranos is slated to hit theaters after its U.K. premiere in December, but is available online for a limited time until March 29. The special International VOD presentation is sponsored by Frankie & Benny’s, who is offering customers 50 percent off movie tickets.