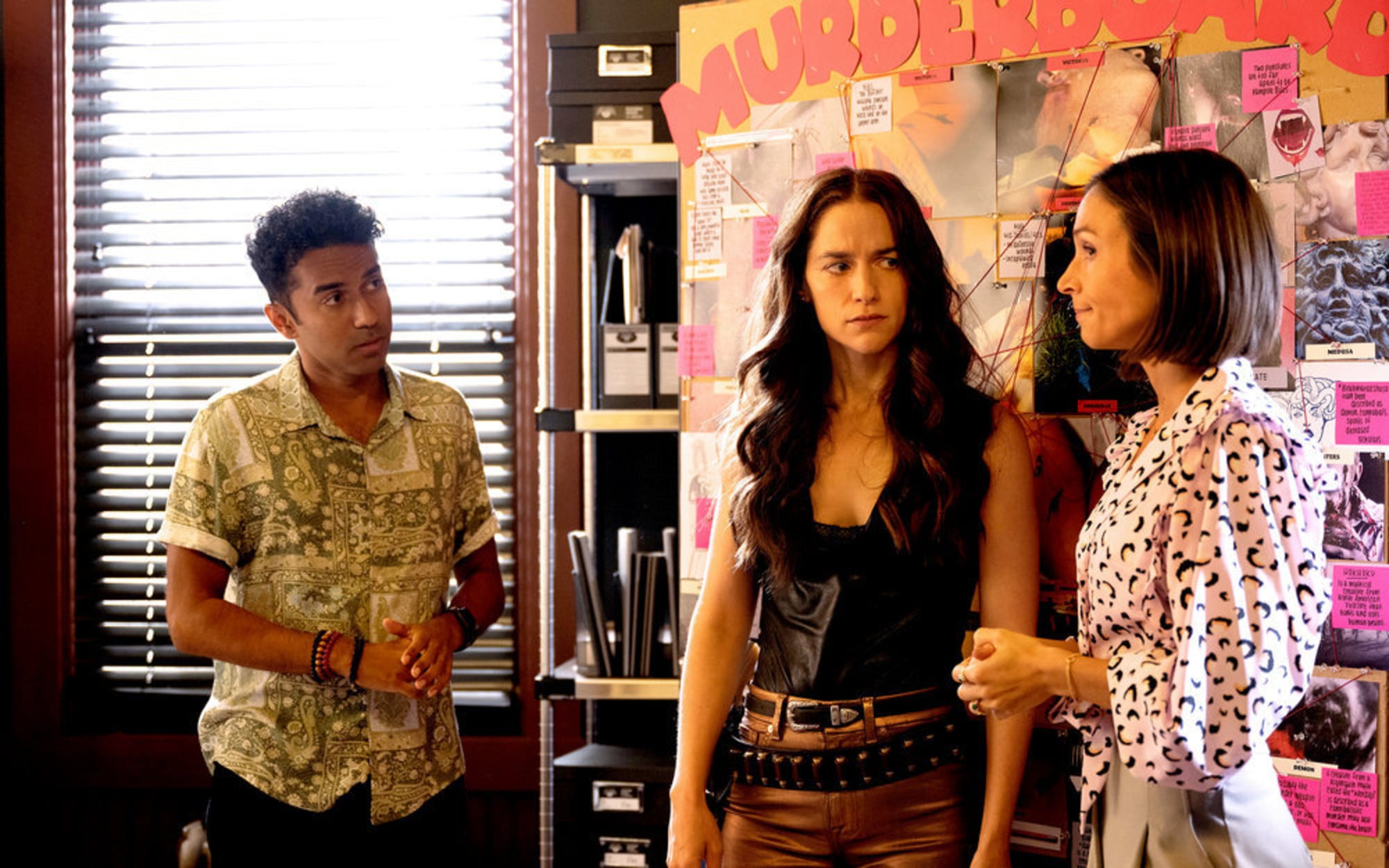 Wynonna Earp has often balanced the inherent darkness of its premise with, among other tones, some zany supernatural fun. Ostensibly, “Crazy” is another case-of-the-week story that has Wynonna & co. hunting a social media-obsessed genie who has a cannibal suffering from kuru disease as her master. Past that, it’s yet another glimpse into just how deeply Wynonna has internalized the curse she was once ruled by, and just how much she is suffering because of it. She may no longer be beholden to the Earp curse, but Wynonna is still living as if the only thing she’s good for, the only thing she deserves, is a life of demon-killing. “Genie, you’re free,” our protagonist tells her target—the implication being that there is no such freedom for Wynonna, only a life of looking morally ambiguous monsters in the eye as she kills them and then going to sleep drunk and alone.

I can’t quite figure out where Wynonna Earp Season 4B is going thematically, and I am enjoying the mystery. Because I think this show does have things to say about monsters and morality through a feminist lens. I love that Wynonna’s true antagonist in “Crazy” is not Doug, but rather Genie. I’m not sure how well it works that Genie’s relationship with Doug begins narrative life on this show as an allegory for domestic abuse, but, aside from that, Genie’s messy end works. Because Genie’s culpability in Doug’s murders isn’t black and white. She may be hiding behind Doug’s wishes and his disease, or she may be genuine when she tells Wynonna she silenced her screams because she couldn’t stand to hear them when there’s nothing she could do. Wynonna seems to believe this is a lie, but it’s unclear if she would have made a different choice, that she would have spared Genie’s life, even if she did believe the excuse.

“You gotta listen to the screams. You’ve got to look the cost of it in the eye, and tell it to go fuck itself,” Wynonna tells Genie. Because this is the deal Wynonna seems to have made with herself, the line she has drawn in the sand, and you’ll notice it is very different from what happened with Holt Clanton. She didn’t look Holt in the eye. She waited until his back was turned to shoot him, and she seems to think there is no coming back from that. She doesn’t believe she can be with Doc unless he falls down to the dregs of humanity alongside her. “Welcome to the moral low ground,” she tells Doc when she believes he has killed someone, so happy to have a companion once again because she is so damn lonely in her moral failure. But she doesn’t know how to ask for help; she only knows how to keep fighting. “The difference is that you have a way out,” Wynonna tells Genie because she is so unpracticed at imagining a future for herself guided by self-compassion and forgiveness—these weren’t thinks her daddy taught her.

Meanwhile, Nicole is finally able to face her own ghosts—and I’m (mostly) not talking about that chicken-kicking video. It’s fitting that this episode begins with Wynonna and Nicole doing some friendly sparring because the two mirror one another in some interesting ways in “Crazy.” The difference is: Nicole is much further along working through some of the issues holding her back. She is able to look Doc in the eye and be honest about the mindset that led to making a deal with Margo Clanton, trading Waverly’s safe return for Doc. She admits that she was scared, and she thought Doc would be able to get out of whatever the Clantons had in store for him. She doesn’t say she regrets it because that would probably be a lie—she had to be sure that Waverly would come home—but she listens when Doc rebuts and she apologizes. More importantly, she faces it… and herself.

In the process, she reclaims the town sheriff position. (The democratic process has really fallen by the wayside in Purgatory, huh?) It’s hard for me to get behind Nicole’s return to the uniform as anything other than a plot point driven by characterization. If this series has a major narrative flaw, it’s the lack of specificity in its small town setting. As someone who grew up in the middle of nowhere, I’m always on the lookout for more authentic representations of rural life, and Purgatory is not it. (Though it does get winter right—for obvious reasons.) That being said, I don’t need Purgatory to be authentic, but I do need the setting to have, for want of a better phrase, better character continuity. Wynonna Earp seems to want Purgatory to have a sense of place, but it’s been incredibly erratic, from season to season and sometimes from episode to episode. That someone could live in this town and not know that Doc is a hundreds-year-old vampire or that Waverly is an angel is unlikely. The memory-altering fog hasn’t made it to town… yet.

Speaking of which, Genie tells Wynonna: “I can stop what’s coming,” implying that yet another Big Bad is on the way—presumably, Eve, whom we haven’t seen since the beginning of the season. It’s too soon to tell and not as much fun to dwell on as other aspects of this meaty scene. We’ve discussed much of it, but not the fact that Wynonna is offered Genie’s power and seemingly easily refuses. And that’s one of the things that sets Wynonna apart from the villain she is so afraid she has become. Villainy is using the power you have to hurt other people for the sake of securing and/or accumulating that power. It’s what Doug was doing when he started eating people’s brains. (Although that analysis is complicated by the fact that Doug seemed to have some kind of mental illness?) Wynonna has only ever used her power to try to protect others.

The question then becomes: what was Wynonna’s choice to kill Holt if not villainy? Is shooting someone in the back to keep them from potentially hurting your family an act of securing power? Does it matter what we call it? Should any one person have the right to decide which demon lives and which demon dies? Wynonna is obviously wrestling with these questions, even if she is unable to articulate them in any real way to herself or her loved ones. The closest she gets is in her conversation with Genie—a “safe” space to express her feelings as Genie is about to take them to her grave or hell or wherever she is about to end up. “I get it. I’m poison too,” Wynonna tells Genie, equating herself with someone who just helped a man slaughter multiple innocent people. It’s yet another sign of just how poorly Wynonna thinks of herself these days, and just how dark this show can get in an episode that also involves another character delightfully yelling “Kristi Yamaguchi!” to a crowded bar.

It’s telling how cult-like and obsessive people can get about trivia irl that it took. meso long. to realize that everyone in town was under the influence of Doug’s wish.

“I never want you to blunt your ambition… it’s one of the things that makes you you.”

“I must remain in this battle to prove that it is I who has the ideal brain.”

Maybe Purgatory should come up with an alternate model of local law enforcement?

I loved the multiple convos between Nicole and Rachel—a reminder that these two spent a lot of time together as family when Waverly, Wynonna, and Doc were in The Garden.

“God damn law enforcement.” “The gun does tend to go to their head.”

“That means our beautiful cowboy is in the clear.”

Jeremy’s a really bad coroner, huh? He didn’t notice that those corpses have no brains.

Jeremy and Waverly get to make a murderboard!

Wynonna: I won’t leave your side.
Wynonna: *immediately leaves Genie’s side*

“Random trivia is not an accurate way to judge intelligence.” Scream this from the rooftops. But also I love trivia.

“Well, now I love trivia… and you. In that order.”

What did the Clantons want with Doc? I assumed Margo just wanted to, you know, torture him then kill him, but the fact that Season 4B made a point of bringing this up again makes me think it’s more complex than that.

“The badge alone does not give the authority.” Doc demonstrates his peptalk superpower yet again.

Anyone else miss iZombie while watching this episode?

The gap between real-life cops and TV cops is so broad.