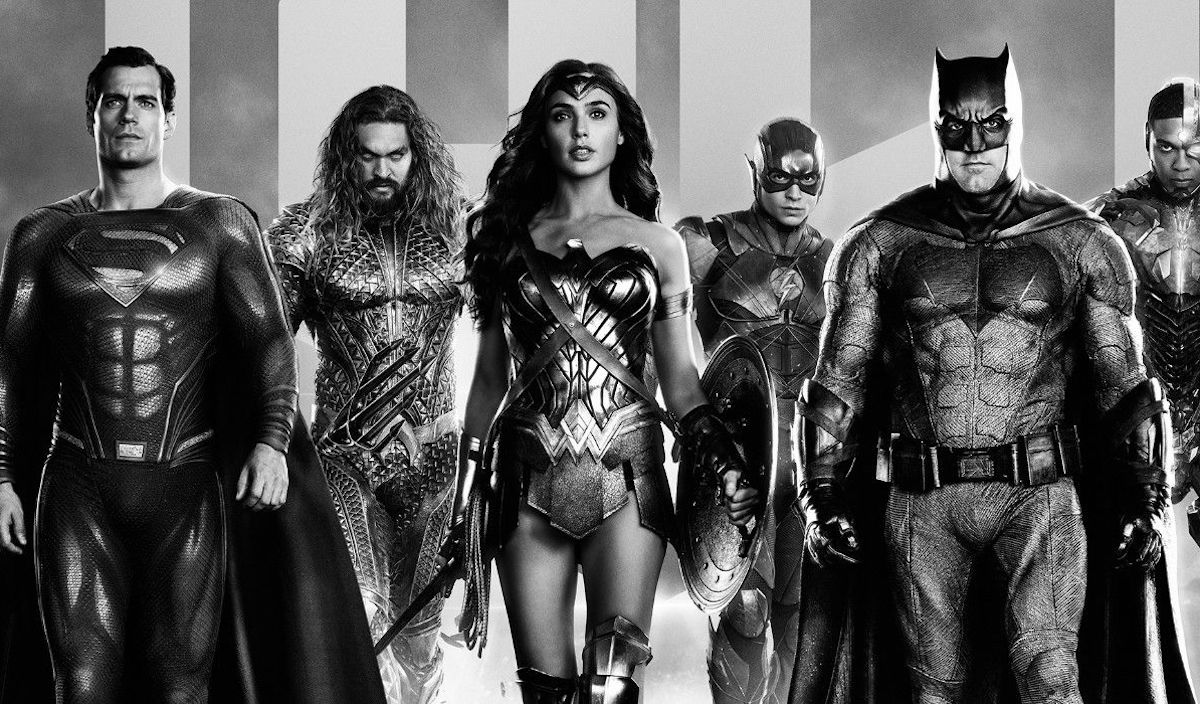 The long-awaited Snyder Cut is here at last. After nearly four years of rumors, innuendos, hints, allegations, online harassment, and everything else that’s good and bad about fandom, Zack Snyder’s Justice League has been willed into existence by the filmmaker and his legions of fans.

Four hours long–one for each year you’ve had to endure the clamor of Snyder acolytes demanding the filmmaker’s vision be restored–Zack Snyder’s Justice League is the ultimate version of the movie that Snyder never completed in 2017. Instead the version of the film that reached theaters was a truncated, patched-together mess that nearly stopped the DC cinematic universe in its tracks.

If you detect a bit of snark in the preceding paragraph, you’re not off-base. The very notion that a vocal contingent of fans could make enough noise to actually get a version of a piece of art or entertainment in their preferred format opens a proverbial Pandora’s box. Everyone treats whenever fans sign online petitions to get movies, television finales, or the like remade as jokes. But a cynic might wonder if the Snyder Cut gets us closer to that happening.

There is of course a key difference between Snyder finishing his passion project and other flair ups between fans and creators: The Justice League that came out in 2017 was a Frankenstein’s Monster of a movie, with half of the finished picture rewritten and reshot by a director (Joss Whedon) with a completely different tone and approach. This occurred after Snyder had to abandon it due to a terrible family tragedy–which, in the most cynical version of this tale, the studio (Warner Bros.) saw as an opportunity to hijack the film and retool it to their liking.

So now that Zack Snyder’s Justice League is a thing, with the original director restoring hours of footage that he shot (and adding some freshly filmed material at the end) while throwing out everything he didn’t, there is one question that burns as fiercely and brightly as the raging eyes of Darkseid himself: Is it better than the 2017 theatrical version, aka the Whedon Compromise?

The answer is unequivocally yes.

Now that doesn’t automatically make ZSJL a good film. Nor does it necessarily make the Whedon version a wholly bad one–but there’s no question that the 2017 version suffers greatly and is diminished by comparison. In fact, it’s almost not fair to call that version the “Whedon” one; regardless of the man’s personal controversies, it seems apparent that he was put in an almost impossible position when he was recruited to finish Justice League back then.

Whedon was tasked by the studio to make a movie more like his own The Avengers out of material that couldn’t be more different in terms of tone, visual style, pacing, and structure. He was also asked to recreate what Marvel had taken six movies to do: introduce and assemble a team of superheroes all in a single film and in less than two hours (minus credits). And he did that by stitching together footage that was already shot by a different director with scenes that he had to craft almost on the fly, all with a desperate, panicking studio breathing down his neck. Whedon could have summoned Scorsese, Coppola, and the ghosts of Hitchcock and Kubrick to help him solve it and it still might have defeated him.

The result was a movie that was the soulless, corporate product that critics accuse all Hollywood blockbusters, particularly superhero movies, of being–but which most are decidedly not. Whedon’s own The Avengers is proof that a studio can make a heartfelt, earnest, charming, and still awe-inspiring spectacle with the right people, story, and vision in place. The vision behind 2017’s Justice League–which does have its lively moments and does benefit in some ways from better pacing (but is ultimately hurt more by its shortened running time)–is a vision only of bottom lines and quarterly profits.

So, yes, ZSJL is the better movie. For one thing, it’s clearly a personal work. Whatever one thinks of Snyder’s directorial vision and peculiar take on superheroes, it’s all there on the screen and unashamedly his, just as Batman v Superman: Dawn of Justice and, to a lesser extent, Man of Steel were. The fact that the DC film franchise has long moved past his approach doesn’t necessarily factor into ZSJL. It stands alone.

On its own terms, it hits all the marks that Snyder probably wanted to hit. The story and several of the characters are developed much more than they ever were in the 2017 edition. True, a lot of exposition is needed to make that story more cohesive and complete than it was before, but there are plenty of new visuals to go along with that foundation building as well. There is much more representation here of the full breadth of the DC universe, from ancient gods to Jack Kirby’s Fourth World.

The back story of Darkseid and the Mother Boxes, and the first battle for Earth with the Atlanteans, the Amazons, and everyone else somehow seems better articulated and executed. The connective tissue joining Darkseid’s quest to that of his lackey Steppenwolf–tying it all to the death of Superman, whose removal from the board cleared the way for Steppenwolf to return–is strengthened. Bruce Wayne’s quest to put together the team to defend the planet takes longer and has more steps to it, making it feel like much more of a challenge than it did four years ago.

Some of that team are given much better treatment this time, with Victor Stone/Cyborg getting the most out of the deal. He truly does become the heart of the picture in many ways, getting two extensive flashbacks that are equal parts elegant and clumsy but do a lot to round out a character who was little more than a special effect in 2017.

Ray Fisher’s performance is assured and graceful, and one can now see why he is so angry about what happened with the theatrical cut: it’s quite possible that some backroom studio committee meeting came up with a variation of “we can’t have an unknown take up so much space in a movie starring Batman, Superman, and Wonder Woman.”

Ezra Miller’s Barry Allen/the Flash also has more to do than make jokes, although the much-ballyhooed introduction of Iris West (Kiersey Clemons) is little more than a walk-on, seen once and never heard from again (there’s a bit of that going around in this picture). Similarly, Lois Lane’s grief over the death of Clark/Superman is explored with somewhat more depth, although an otherwise poignant scene between her and Martha Kent (Diane Lane) is nearly ruined by a pointless twist.

Aquaman (Jason Momoa) and Wonder Woman (Gal Gadot) are less developed here, and their characterizations clash with what we’ve seen since in their standalone movies. There is a much more melancholy resonance to the absence of and longing for Superman. And although he’s still no Thanos in terms of complexity and nuance, Steppenwolf at least has a clearer motivation in this film. He just wants to get back on the boss’ good side, which kind of makes him weirdly amusing in a movie notable for its almost complete lack of humor.

All the banter that Whedon wrote and shot–the flirting between Bruce and Diana on the plane, Aquaman sitting on the Lasso of Truth–is gone. There are still some laugh lines in the movie, but ZSJL is as self-serious and grimdark as Snyder’s previous two DC entries. That makes it feel heavy-handed, as does Snyder’s deployment of agonizing slow-motion for so many scenes that it feels like he could have lost an hour just by speeding up the film. The colors are murky, mostly brown and gray, and while a number of visual effects are pulled off handsomely and seamlessly, this is supposed to feel mythic but ends up feeling just artificial more often than not.

But most importantly, the story and characters in this Justice League are still ill-served by the way the film was conceived in the first place. Even though our heroes are overall given more to do, this is still a movie that has to introduce three of those heroes, their backstories, and their worlds in one fell swoop. There’s no sense of culmination or victory in seeing them together, like there was in The Avengers. And in the end, Steppenwolf’s pursuit of three magic boxes just doesn’t carry the entire four hours.

For all the world-building that Snyder (and screenwriter Chris Terrio) do, the placement of the “Knightmare” epilogue and its Joker cameo undermine everything that has come before, and undermine the character of Superman again. By the time the movie’s ending rolls around, Snyder is still basically saying that our heroes are going to keep letting us down–especially poor Superman, who’s going to turn evil in the future after being killed off and brought back once already as a rage monster. The addition of a Martian Manhunter cameo (his second!) at the very end is also superfluous, pointless fan service.

It certainly seems as if Snyder put every scrap of footage he shot into this version of his magnum opus, and perhaps that is what it took to give him closure, both for the film and for the unspeakable loss he endured while making it (there is a poignancy now to the movie’s major plot point of trying to bring back someone from the dead). But just because he could do it doesn’t mean he should have. Incredible as it seems, there may be an even better two-and-a-half or even three-hour cut of this Justice League that we’ll never see.

As it stands though, this one we now have will be the one spoken about in the years to come. Meanwhile the 2017 version will fade into history as an oddity. And that is, in the final analysis, the way it should be.