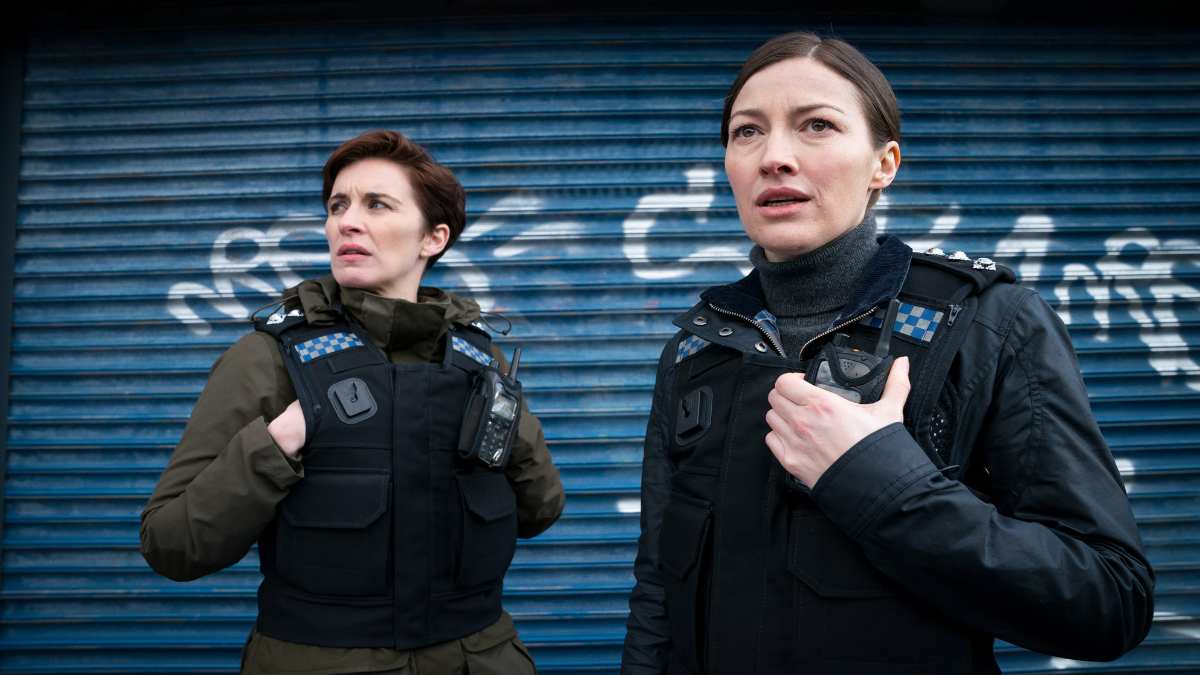 Is this allowed? Somebody please check. Can Kate just leave AC-12? She’s a third of the operation. One of the three pyramids at Giza may as well stand up and walk away. The strawberry from Neapolitan ice cream, silver Olympic medals, degrees 240 – 360 of all circles… could they also just call it a day? Unacceptable. This is AC-12 we’re talking about. 12 as in four times three: the gaffer, Steve and Kate – the corners of the straight-backed, clean-nosed triangle of truth.

No wonder Ted is feeling sore about it. The Super could barely bring himself to look at Fleming’s picture in this series six opener, the sight of those blue, blue eyes prompting him to mutter about loyalty and then change the subject to great wee girl Chloe, AC-12’s newest recruit. Last series’ investigation into ‘H’ clearly left a grubby stain on the unit’s reputation. How will Hastings react when he finds out that Steve also has one foot out the door?

We can’t blame Steve for requesting a transfer to Jolly Rogerson’s Major Violent Crime unit. He’s currently living a life as grey as his waistcoat. He spends his days chasing up expenses receipts and his nights washing down blister packs of over-the-counter painkillers with premium lager. Meanwhile, Kate’s out there wearing the waistcoat of danger, complete with bullet proofing, reflective stripes and a radio. Who wouldn’t want to swap?

I’ll tell you who I wouldn’t swap places with right now: anybody. This is a new series of Line of Duty and we’re at the top of the toboggan run. Episode one is the push start, building up speed for the tortuous descent, sharp turns and bit at the end that goes so fast your ears fold back and you can taste blood. We’re going places, is the point, and after a year of hardly straying further than our front doors, I can’t be the only one willing to kiss the ground beneath AC-12’s feet.

Now, what do they have for us this time? Operation Lighthouse: the unsolved murder of Gail Vella, a crusading journalist shot dead outside her home in the Kingsgate area a year ago. (Prematurely killing off guest stars is one of Line of Duty’s favourite tricks, but a series is usually polite enough to wait at least until it starts before doing so. Not in the case of Andi Osho’s Vella.)

After the first whiff of a clue in months, senior investigating officer DCI Joanne Davidson (new guest lead Kelly Macdonald) diverts the team on its way to collar the suspect to a suspicious-seeming side mission that loses precious time and potentially, their man. Did her spidey sense really start tingling at the split-second glimpse of a parked van, or was the armed robbery a planned distraction?

In addition, Davidson’s boss DSU Buckells (we’ve met him before) screws up the op paperwork, leaving a gap in surveillance coverage long enough to allow a Russian circus, let alone a single suspect, escape from the flat in question. Next, the Covert Human Intelligence Source (or CHIS. Keep up, this was all covered last term) able to ID the suspect is found very much pushed off a tall building.

What we need to know: Is Davidson deliberately obstructing the hunt for Vella’s killer, and is she working with Buckells to do it?

In the ‘yes’ corner is PS Farida Jatri, a member of Davidson’s team who tips Steve off about her boss’ suspicious behaviour. We don’t know what Davidson is capable of, warns Jatri. But not so fast! Farida also turns out to be Davidson’s spurned, secret lover. Does that make her testimony likely to be more reliable, or less? Valuable insight, or axe to grind?

In the ‘no’ corner is the fact that, after nicking Terry Boyle – a recurring Line of Duty character with Down’s Syndrome and a long-time associate of the OCG – and spending the episode pushing the theory that he was Vella’s obsessed stalker, Davidson let him walk. Until that moment, she’d looked guiltier than a dog with a cat’s tail hanging out of its mouth. Everything she’d done and said suggested that she was part of a plan to frame Terry while the real killer – likely one Michael Banks (a relative of series five OCG member Lee Banks?) – got away. In this theory, Banks shot Vella to stop her from exposing links between police officers and organised crime, and Terry was meant to be the OCG’s fall guy.

At this stage in proceedings though, any theory is a just house of sticks waiting to be blown away by big bad wolf Jed Mercurio. Maybe Farida will be revealed as the killer. Maybe Terry really did do it. Maybe new DC Chloe Bishop is Tommy Hunter’s long-lost granddaughter here to bring down AC-12 from the inside. Maybe they need to focus on hunting down this Mike Indigo fellow everybody keeps talking about on their police radio. Right now, we simply can’t know. It’s just a case of keeping our eyes open and taking everything down in a little notebook.

A few things to note down: 1) Steve’s painkiller addiction – a hangover from the serious injuries he sustained in series four and a potential weak spot for the DS. 2) The missing freezer from Terry’s flat, which we know used to contain the corpse of series one’s Jackie Laverty. 3) Jo Davidson’s Fort Knox-levels of door security and complicated feelings about that family photo. 4) Kate’s separation from Mark, and that little hand stroke from Davidson at the end. 5) Terry being told he’ll be safe in secure accommodation (will he?).

The ‘Kate’s in another unit but not undercover’ twist aside, this hour bore similarities to some previous series openers. Both two and five started with disaster-struck police convoys deliberately diverted by female officers in the pay of the OCG. The character of Michael Farmer in series four also gave us the interrogation of a young murder suspect with a learning disability. Would a drama this well-tuned into its own detail and history not care about repeating itself? Doubtful. Line of Duty knows that its audience pays it the same level of attention that a Labrador pays to somebody eating a Jaffa Cake; if we’re being led to draw comparisons, there’ll likely be a reason, and it’ll likely be to pull the rug out from under us.

Does Davidson bear similarities to past leads? She’s less of a cold fish than Lindsay Denton – see that banter with Kate in the opening scene – but like her, lives alone with a bottle of Sauvignon Blanc for company. She’s as commanding as Roz Huntley – whom you could also imagine asking a churlish underling if the word “ma’am” was in their vocabulary – but more emotive and less inscrutable. (Huntley would never have lost control enough to respond “shit, shit, shit” to the armed robber being shot, or exploded like that in Buckells’ office.) Innocent, or up to her neck in it? That’s what we’re here to find out.

The game with Line of Duty at this stage is to keep the important things the same (long, tense interrogation scenes; naturalistic jargon; exhilarating doc-style action; Ted taking any opportunity to mention pipe bands, Tayto Crisps or Gloria Hunniford…), while getting us hooked on a new lead and a new mystery. Episode one? Job done. In the words of the Super: I’m gonna need more, son.

Still have questions? Read our weekly episode theories explainer here. Line of Duty continues on Sunday the 28th of March at 9pm on BBC One.