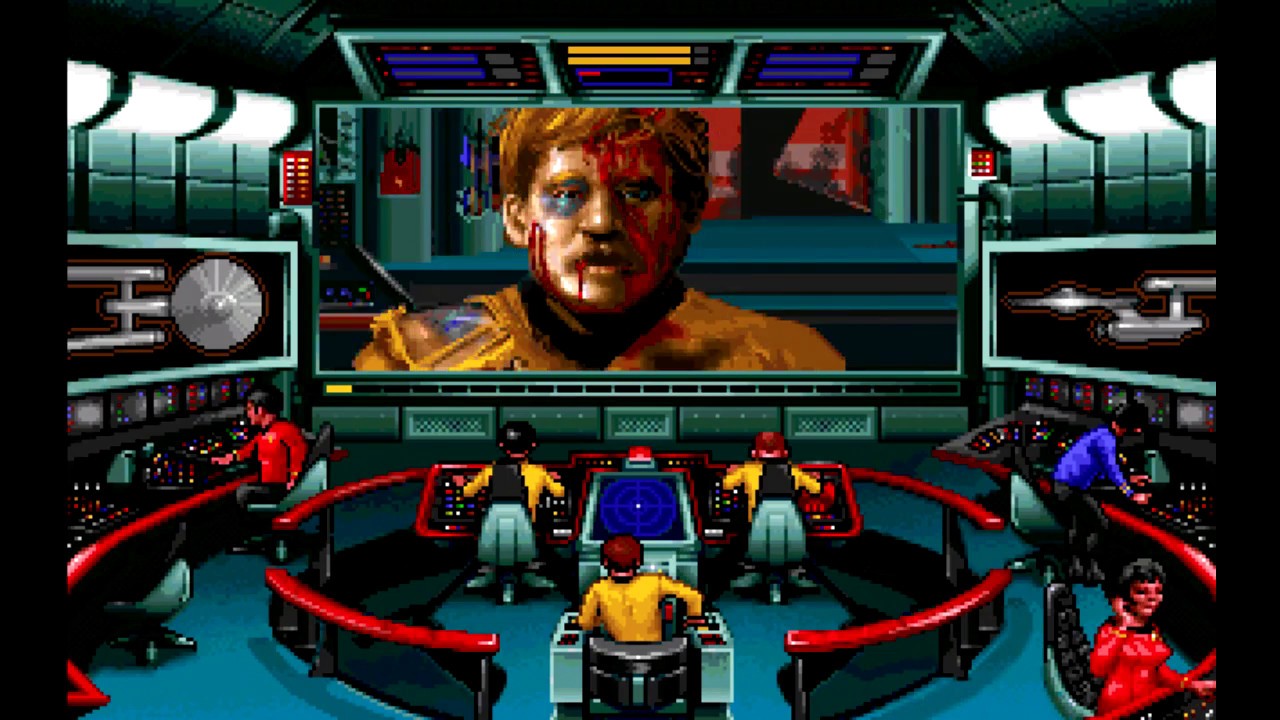 There are times when it’s still nearly impossible to believe that a beloved and revolutionary show like Star Trek: The Original Series TV run was unceremoniously ended after a final season that often showcased the series at its very worst. While Star Trek would live on and the original Enterprise crew would get the chance to enjoy a more appropriate farewell across six film adaptations, millions were long left wondering what could have been if Star Trek’s final days weren’t ruined by a combination of production problems, bad decisions, and worse timing.

Remarkably, though, it turns out that we never really had to wonder what adventures we could have joined the Enterprise for if the show had just stayed on the air a while longer. In the early ‘90s, developer Interplay Productions released two Star Trek games (Star Trek: 25th Anniversary and Star Trek: Judgment Rites) that combined the golden era mechanics of point-and-click adventure gaming with the episodic structure and stylings of the original Star Trek series. With help from the original Star Trek cast and a supremely talented group of writers and designers, they effectively gave us two more Star Trek: TOS seasons (albeit abbreviated ones) that we never would have gotten otherwise.

You may have written them off as elevated fan fiction, but that’s simply not true. In fact, in Star Trek: Judgment Rites, we got a proper TOS final season that every Star Trek fan should experience if they often find themselves wondering what those lost years could have been like.

Judgment Rites Wasn’t Limited by the Age of Its Actors

Incredibly, Judgment Rites reunites the Star Trek: TOS cast and stands as one of the last times that those characters would share a new adventure together. Prior to its (and its predecessor’s) release, most of us believed the Star Trek films would be the last time we got to see the Original Series‘ crew in action.

As wonderful as…most of those movies are, Judgment Rites offers something they never could: a way to ignore the age of the Original Series‘ actors.

While some of the Star Trek films did a wonderful job of utilizing the age of its actors and incorporating them into the themes of their stories, it was clearly impossible for them to allow that crew to simply enjoy a new season of adventures that didn’t have to constantly account for the fact that these legends were quite a few years removed from their primes.

By simply asking the cast to lend their voices to digital bodies, Judgment Rites pulled off a feat worthy of the most memorable TOS episodes by taking us back in time to a point we thought we’d never see again no matter how much we wanted to relive it. Even the fact that not all the actors brought their “A-game” feels strangely appropriate to the occasionally uneven performances seen in the original episodes.

Judgment Rites’ is hardly lacking in memorable stories, but if I had to pick one of its episodes to add to Star Trek’s original seasons, it would have to be “Museum Piece.”

The episode’s premise sees Kirk, Scott, and Chekov beam down to a Smithsonian Annex to participate in a special ceremony involving the return of an artifact to a race known as the Lachians. That ceremony is interrupted by terrorists with a grudge against the Lachians and the very idea of returning the artifact to them. It’s now up to the Enterprise crew to defeat the intruders without the help of any of their usual resources.

It’s a very “Die Hard” premise that initially seems pretty far removed from the classic elements of TOS. Truth be told, part of its charm is that it is unlike any other episode of TOS. It’s this strange detour of a story that focuses on a relatively small event bolstered by the ways it allows us to examine how characters we’re familiar with would react to a relatively new situation. Watching Kirk and crew sneak their way through the museum in search of artifacts and exhibits that can help them defeat what would usually be a pretty standard threat is a simply inspired concept.

At its best, though, this story does very much tap into that classic TOS spirit. While that spirit is best represented in the banter between the crewmates, the most observant players may discover there’s a twist to this tale that forces our heroes to reexamine the situation and take the time to learn about what’s really happening rather than just dispose of all the “bad guys” and call it a day.

Star Trek: TOS was a lot of things, but one of the qualities of the show that’s easy to appreciate all these years later is just how weird it was. Even when that weirdness went wrong (as it often did during the show’s third season), TOS’ worst episodes usually at least gave us at least one “WTF?” moment to obsess over.

Judgment Rites’ manages to invoke the best of TOS’ campy weirdness through stories like “No Man’s Land.” Essentially a sequel to a Season One episode called “The Squire of Gothos,” “No Man’s Land” sees Trelane once again hold the Enterprise crew hostage for his own amusement. This time, though, Trelane is obsessed with World War I and has even trapped the away team in a replica of a WWI-era village where he is known and feared as Baron von Gothos.

It’s a bizarre and sometimes confusing premise that wins you over the moment you realize just how far Trelane has gone to recreate this time he now can’t get enough of. While elements of this episode invoke those classic Star Trek time-traveling adventures that cast our heroes as fish out of water, we soon find that Trelane has instead created a more “romantic” version of this time rather than an accurate recreation of that period. He’s even created a character who is left to forever die dramatically on the streets in an attempt to set the mood.

Moments like that and a scene where Kirk and a soldier debate the merits of their political ideologies allow you to realize this strange concept is actually the perfect vehicle for a look at the trappings of second-hand nostalgia. Unlike many TOS Season 3 episodes, it’s the ways this one uses campiness to tell a story that would be difficult to effectively convey otherwise which really sets it apart.

We’re not going to get into the TOS/TNG debate here, but it’s safe to say that TNG did some things that would have made TOS an even stronger show. Released in 1993 (just a year before TNG’s final episode), Judgment Rites was uniquely able to apply some of those things to TOS stories in a way that the original show obviously could not.

For instance, Judgment Rites does a great job of tying together a few of its key adventures with a lingering plot thread that is stretched out across the season’s run. Throughout their Judgment Rites adventures, the Enterprise crew begins to suspect that they’re unwillingly participating in a kind of test that may very well determine the fate of humanity.

That idea echoes a similar concept most prominently utilized in TNG’s first and last episodes, but I’m not really talking about the specific plot point when I praise Judgment Right’s adoption of TNG ideas. Instead, I’m more impressed with how Judgment Rights allows the TOS crew to enjoy their weekly adventures while constantly implying that everything we’re seeing is part of a much bigger story.

That’s an idea that we sometimes saw in TOS, but it was really TNG that found a more consistent blend of serial and standalone storytelling. Honestly, the way that device is used within the TOS framework is sometimes better than how it was utilized in TNG, which is really a testament to the timeless nature of TOS’ premise, characters, and possibilities.

One of the big problems with the last season of TOS is the way that it was hindered by this apparent obsession to define what Star Trek was. Studio execs wanted to put the series in a box despite the fact that fans knew that its greatest joys often stemmed from the fact that TOS tended to offer something a little different each week.

Judgment Rites returns to that variety show approach through a combination of episodes that cover everything from warring tribes whose prejudice threatens to destroy them to time travelers who deliver a cryptic warning shortly before dying. It’s a true variety approach that benefits from some serialized storytelling but always leaves you wondering what will happen next.

More importantly, Judgment Rites finds a respectable balance between space dogfights, bridge banter, away team action, character moments, and all those other individually iconic qualities that contributed to the best Star Trek episodes. Even good Star Trek games (such as Bridge Commander) usually picked one aspect of the show and just ran with it. That makes it all the more impressive that Judgment Rites manages to maintain such a delicate balance between those concepts even if it never fully masters one of them.

Through most of its incarnations, the Star Trek franchise has attempted to emphasize the values of understanding, tolerance, intelligence, and basic human morality. Some Star Trek series struggled to effectively convey those concepts (looking at you Discovery), but in Star Trek, there’s this idea that a better world wields unique rewards.

Judgment Rites retains TOS’ revolutionary social commentary concepts in the usual ways (such as stories that deal with fascism, racism, and other pressing issues through overt tactics appropriate to the original episodes), but what impresses me most is how it incorporates those ideas into the gameplay.

See, sometimes you can make the wrong decision in Judgment Rites without realizing you’ve done so. Something may seem right at the time and maybe even get you where you’re going, but you’ll later discover that there was actually a better way to do something. More often than not, that better way forces you to open yourself up to new ideas, truly listen to others, and explore all possible options just as the Enterprise crew often tried to do.

Through this system, Judgment Rites emphasizes that it’s not always easy to do the right thing, but that the effort of discovering what the right thing is can sometimes be a great adventure in and of itself.

You could certainly argue that Star Trek: TOS’ greatest sin was the decision to end the series on “Turnabout Intruder:” a body swap adventure that’s bad writing, awkward acting, and troubling sexist themes not only made it unworthy of the series but entirely undeserving of its series finale status.

Judgment Rites own finale (the two-part adventure “Though this be Madness….” and “…Yet there is Method in it.” offer a different kind of finale. They tell the story of an ancient race who has pitted the Federation against the Klingons in an attempt to judge their worthiness as beings. It’s not the best story in the game and, truth be told, I highly doubt it would make for a universally satisfying finale to TOS (even if it certainly would have been better).

Yet, there is a quality to these episodes which makes them an undeniably appropriate way to cap off TOS if for no other reason than the way they represent the best and worst of that show. They’re strange, sometimes sloppy, and a bit overwrought, but they also emphasize the political dynamics, character interactions, grand narrative implications, and unexpected twists that have helped Star Trek survive and evolve through the years and certainly help put TOS on the map.

This isn’t the perfect finale, but in their own way, these episodes are a kind of perfect TOS finale.