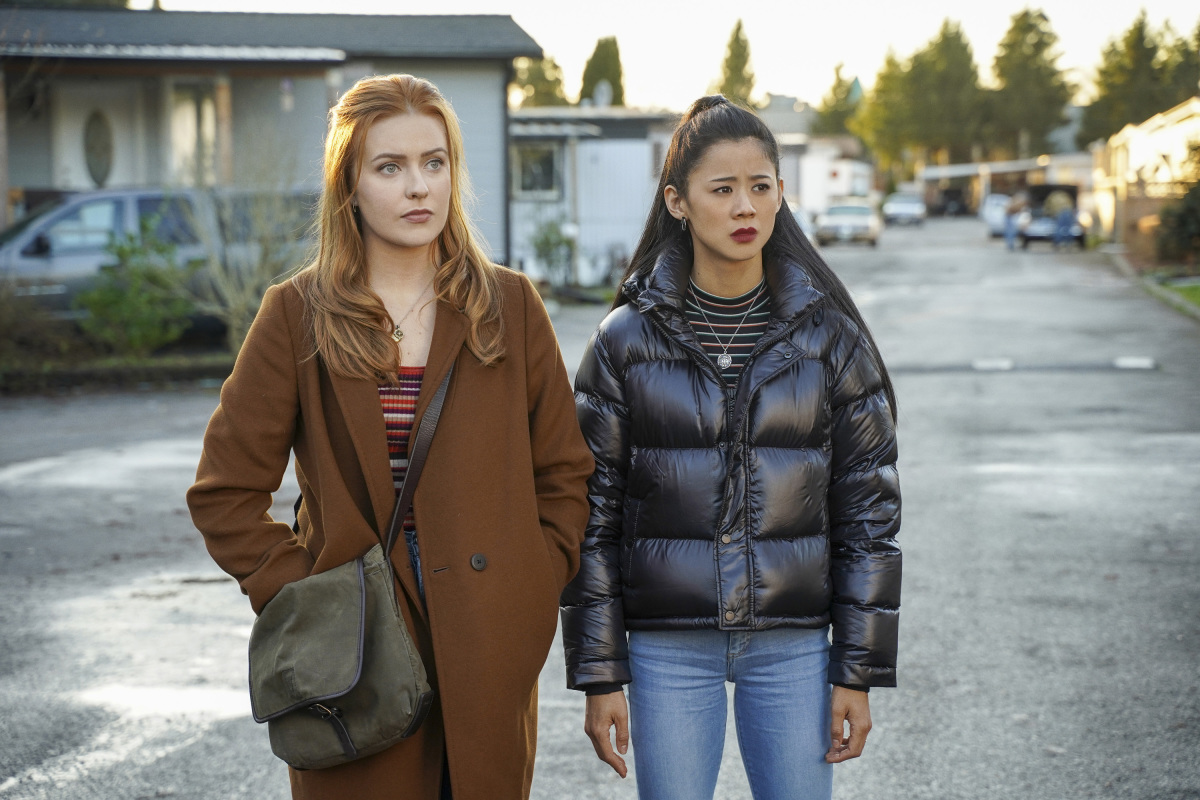 Nancy Drew brings back the Bobbsey Twins to tell one of its darkest stories to date in “The Bargain of the Blood Shroud,” an hour that sees Gil Bobbsey steal the magical artifact that resurrected George and threaten to use it again even though he is well aware that to do so will certainly mean her death.

Truly, it’s a bit upsetting that Gil Bobbsey – another fictional staple of my childhood – is actually such a monster in this episode that he would willingly sacrifice George’s life for the slimmest chance of finding out whether a dying old man killed his mother. Sure, him wanting closure makes sense, particularly in Horseshoe Bay, a town where almost everyone appears to be carrying excessive emotional baggage involving a dead, ghostly, or historically murderous relative.

But George is still alive now, and the idea that her life is somehow worth this information is just…well it’s pretty darn cold. Particularly when it’s only thanks to Nancy and her friends that Gil or his sister are even alive themselves right now.

And it’s most assuredly not the best way to kick off a potential new romance for Nancy, who seems drawn to Gil despite all his repeatedly awful decisions here. I mean, we sort of knew that our girl detective had less than stellar taste in men, but…whew. Of course, she’s drawn to someone who shares similar dead-mother-based emotional issues, and she likely sees something of a kindred spirit in Gil’s mastery of the various petty crime skills that tend to come in handy while sleuthing. But in both of his appearances thus far, we’ve seen him engage in some mild extortion and indirectly threaten her friend’s life. Really not a great look.

This week’s case in which Nancy must solve the fourteen-year-old murder of Rosemary Bobbsey in something like a twelve-hour window, involves art and madness and is notable because once again its answer doesn’t involve anything otherworldly or supernatural. (Unless you count the shroud that can bring back the dead, but truly that’s only tangentially involved here.) And as it turns out, this supposed murder isn’t even a murder at all. Rosemary is still alive – and almost sure to show up again at some point in the future. Instead of ghosts or monsters “The Bargain of the Blood Shroud” is really a story about a woman who loved her kids but needed help, and abandoned them rather than sacrifice them to the monstrous creature she believed was targeting her life.

In some ways, Gil discovering that Rosemary isn’t dead, but simply hasn’t come back in fourteen years, is the ultimate worst-case scenario for him, an event that will force him (hopefully) to reevaluate every facet of what he understood to be true about his life and the person those circumstances have allowed (required?) him to be. Who is he, if not a lost boy lashing out at having lost his mother? What drives him if not being angry about her loss?

The thing is, the addition of the Bobbsey twins to the Nancy Drew canvas is a good thing, and maybe their unwavering loyalty to one another is something that Season 2 will delve into further. For what it’s worth, I’d like to see more of their dynamic as a pair, since we’ve mostly had either Gil or Amanda interacting with the Drew Crew on their own thus far and their confrontation about their mother’s medical condition was one of the episode’s most powerful scenes. I certainly wouldn’t mind seeing a Gil that was a bit less of an extreme creep, is really what I’m saying.

Because Nancy Drew is not being terribly subtitle about the fact that Gil and Nancy are going to be a thing, romantically speaking. And at the moment, this is not a guy who in any way deserves her in any capacity. (At least Amanda came to her senses and did the right thing in the end.) Gil needs to do some serious soul searching, and Nancy herself certainly deserves more than being stuck trying to convince this guy to become a better person than we have seen any evidence of in the past.

Who would have ever expected that we could ever end up this invested in George and Nick’s relationship? Yet, here we are.

Other things I’m genuinely surprised by: That Odette’s story has turned out to actually be a moving one. (Particularly since she spent so many years as a murderous sea spirit.) But her desire to die so she can finally be reunited with her former love at last? It got me.

Nancy Drew is absolutely the sort of show that would give us The CW’s first throuple in George/Nick/Odette and I’m kind of here for it?

Cheers to Leah Lewis for the work she is so clearly putting in pulling double duty as George and Odette-in-George’s-body. The physical mannerisms and non-verbal distinctions she makes between these characters as she switches between them are really well done.

Ace specifically dodging the question of whether or not he’s got a sibling is just another sign he’s a Hardy Boy and no one will convince me otherwise.

Carson is truly the best dad ever and should basically adopt the entire Drew Crew. His making up an opening statement to practice with Bess to distract her was so adorable. You already have a family, girl! Ditch the Marvins and their judge-y group text!