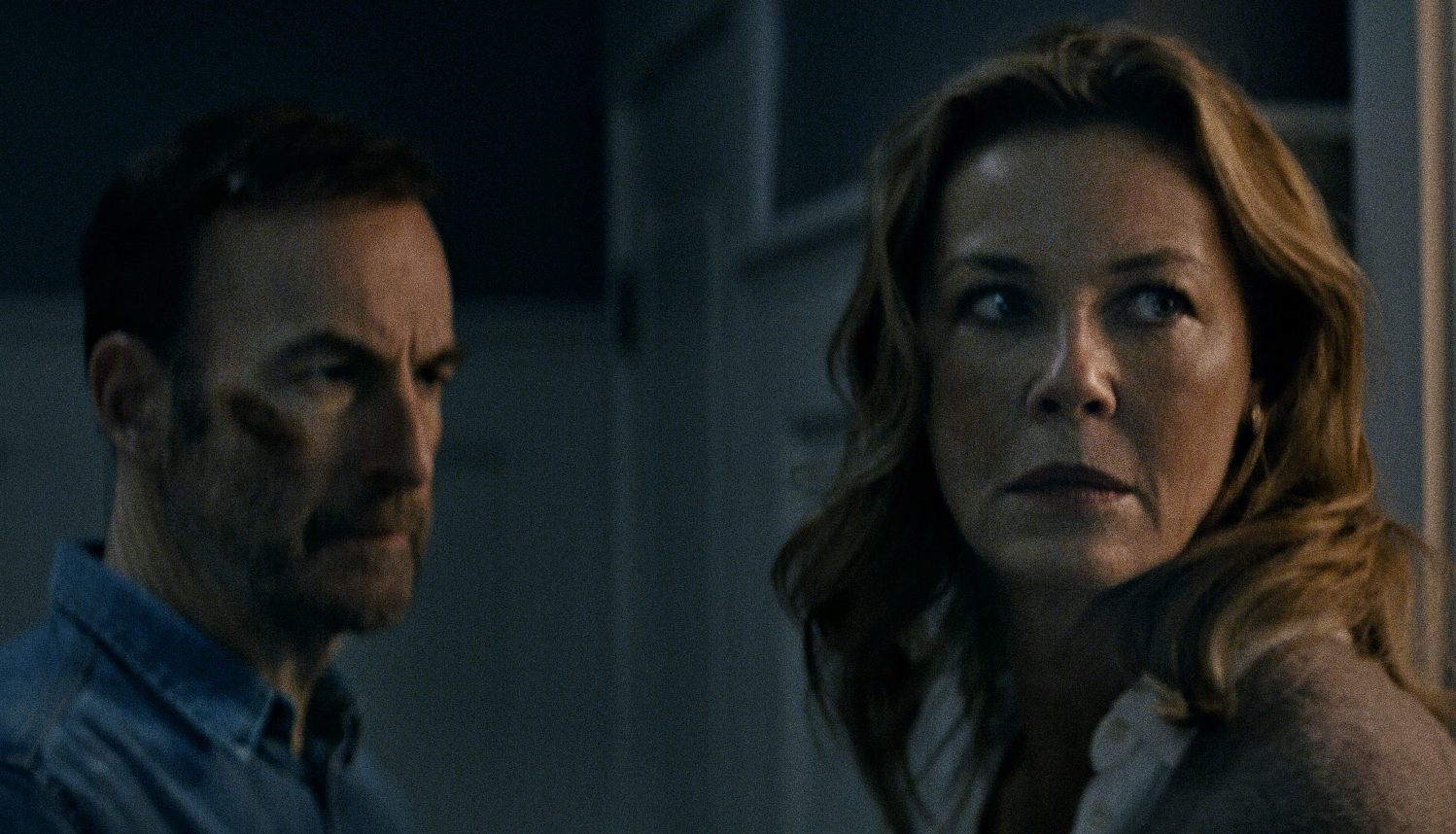 Hutch Mansell (Bob Odenkirk) is (as his film title suggests) a Nobody. He’s a schlub who gets up for the same soul-deadening routine each day: he drinking his coffee, forgets to take the garbage out, and sits at his boring desk job. He then comes home to kids who barely tolerate him and a wife who literally makes a barrier of pillows between them in their bed. When he fails to protect their house against a home invasion–even though he clearly could have–the sense of disappointment from his family is palpable.

But the incident awakens something long dormant in Hutch: a set of skills and a primal anger that served him well in a former life and career defined by violence. Hutch has to give that repressed rage an outlet, which unfortunately brings him into the sights of a deadly Russian crime boss, even as it reawakens his soul and reconnects him with his wife and family.

Directed by Ilya Naishuller (who helmed the equally explosive Hardcore Henry in 2015), Nobody also stars Christopher Lloyd, RZA, and Connie Nielsen as Hutch’s wife Becca, a successful career woman on her own terms, and who probably no longer needs her seemingly insubstantial husband all that much. Yet what Becca does or doesn’t know about Hutch’s past is one of the more intriguing questions that this action-packed film raises.

The Danish-born Nielsen’s first major English-language role was in 1997’s The Devil’s Advocate, and since then she’s appeared in films like Rushmore, Gladiator, One Hour Photo, The Ice Harvest and many more. A new audience embraced her more recently thanks to the role of Queen Hippolyta, the mother of Diana of Themyscira in Wonder Woman, Justice League, Wonder Woman 1984, and the just-released Zack Snyder’s Justice League, which sees her role beefed up considerably from the 2017 theatrical version.

Meanwhile, she and the great Odenkirk play off each other exceedingly well in Nobody, a fact that came up during our Zoom chat with the actress.

Den of Geek: Right at the beginning of this film, there’s a home invasion and Bob’s character, Hutch, doesn’t do anything to protect his family. Did that feel very relatable, this idea that your spouse may not have your back in a situation like that?

Connie Nielsen: I loved that scene. I loved how in the aftermath of that scene you had the neighbor literally representing toxic masculinity: “Oh if it was me, I would have taken him out.” And then you have the kid, our child, our teenage boy, so impressionable, and totally buying into this idea of masculinity: “Yeah. We could have taken him, Dad. We could have taken him.” And it’s just like that’s exactly what we’re trying to say to everybody. Stop putting that stuff on men to be that guy, stop saying that a guy has to be all of these different things because it’s not healthy.

What you then have is basically–you start a film about action movies and about action, and about those tropes within an action movie, but then it actually starts questioning what the idea of masculinity behind all of that is. I just loved the irony of that and that importance of that too, because it does make it so relatable.

How does the relationship between Hutch and Becca play into that?

One of the things I said from the beginning was, “Let’s not make Hutch feel intimidated by his wife. Let’s instead underline the fact that he’s the one who’s depressed. He is not threatened by her success. It’s that he feels like he is nobody. He feels that he has no importance. Everybody’s going to be fine if he just freaking wasn’t there, she would be able to continue taking care of the kids and the money and everything else.” It’s this feeling that he has, that he doesn’t matter, and that he’s not important.

And that is such a brilliant way of framing the midlife crisis of this guy, and also the crisis of the relationship where the power balance is out of whack and they can’t reach each other, they can’t figure out how to be a team until they’re forced to become a team.

It’s also rare in the action genre that the relationship is also age appropriate. There’s not this 25-year gap between the husband and wife.

That has always been a pet peeve of mine, even when I was a kid in this business. When I’m watching a movie and I’m seeing a girl who’s 24 playing the mother of four kids. I’m like, “What?” It’s just so dumb. There are so many women out there who get really offended as they watch these kinds of movies. So it’s just also dumb of producers and directors to cast without being age appropriate, because women get mad, they get irritated.

What other little details do you think you contributed or discussed with the director in terms of just making these characters more vivid on the set?

First of all, one of the things that was most important was when we were talking about my character’s success, that it was believable within the context, and that we didn’t make it a takedown of successful women–if it was problematic, it was not her problem, but his problem. I think that also we really talked about making her behavior understandable. There’s a second home invasion where it becomes pretty hard for her to not pose questions, so how do we play that? For me, the most important thing was to come up with a balanced behavior that also posed questions in hindsight as to, well, who is she really, what’s her background story, how is she dealing with all this, and is there something else there?

It’s a little ambiguous how much she knows about Hutch’s past. She’s never overly shocked by anything that Hutch does when the full scope of his character comes out. And that goes back to the idea that you sometimes really don’t know the person you’re married to.

That also goes for the moviegoers, they may not really know who the character of Becca is either. That’s part of what we also had a lot of fun talking about on set–what are the things that you don’t know about her?

What kind of set did Ilya run? Was there an openness for ideas and improvisational type of things?

I think so. I think especially when we were doing scenes that were about the emotional relationship, it was just really about making it come alive and truthful, that it was profound and that was meaningful emotionally, that we didn’t make it a small moment, but a big moment.

This is the first time you ever worked with Bob.

Yeah. It is, and we never met before.

What is that like when you have to meet and immediately create a relationship between these two characters?

It’s odd, it’s so bizarre and strange. The first day on set when we were doing hair and makeup tests and so on, I was taken to this hangar and there’s box of sand on the floor with a green backdrop and a photographer in front of it. And it’s, “Oh, we’re about to do your family pictures,” and then, “Oh, and this is Bob.” Then you basically sit down and you just immediately move into pictures of our honeymoon and all of these different vacations that we’ve had back in the days when we were happy. I basically just met this man. It’s awkward, but that’s also acting, right? You’re just bringing your own experience and leaning into it as if you know this person.

Did you see the director’s previous film, Hardcore Henry?

I did not see Hardcore Henry, but it was very clear from the beginning that Ilya has this particularly cool way of marrying both music and action and image. So I just felt very comfortable that our producers believed that he was going to bring that same thing to Nobody.

When you look at the way action is done in movies today, on one hand you have the stylized stuff that we see in this movie, and then there’s the way Patty Jenkins shoots the Wonder Woman films, which has this majestic painterly quality. Does this seem like an interesting time for the genre?

I think so. I think that it has just changed so vastly from back in the day with films like Rambo. I think that a lot of these movies used to have a very jingoistic quality to them, and that instead, action has mutated. I think maybe that Taiwan, Korea, Japan, and China brought progress to the genre and really updated it and brought in fantasy elements that were really exciting. Superhero movies have definitely updated those concepts as well. So I do think that action movies continue to evolve. The John Wick trilogy is just such a great example of something that just evolved into this whole world, this John Wick world, which was so cool.

What are your thoughts on Zack Snyder’s Justice League arriving? Did you do any additional shooting for it?

I did my work with Zack on set. I did not have to go back for any reshoots. When Zack was going to start the project back up, he had the courtesy and the kindness to call everybody and ask if we were willing to support him in this. I think every single person immediately just said, “Of course.” I know that we’re all super excited that he’s bringing this vision forward to everybody. And I know that he does not consider this as another Justice League, he considers this a standalone movie in its own right.

Are you signed for Wonder Woman 3?

I know that there’s a storyline that involves the Amazons, that’s really all I can say.

Nobody arrives in theaters on Friday, March 26.