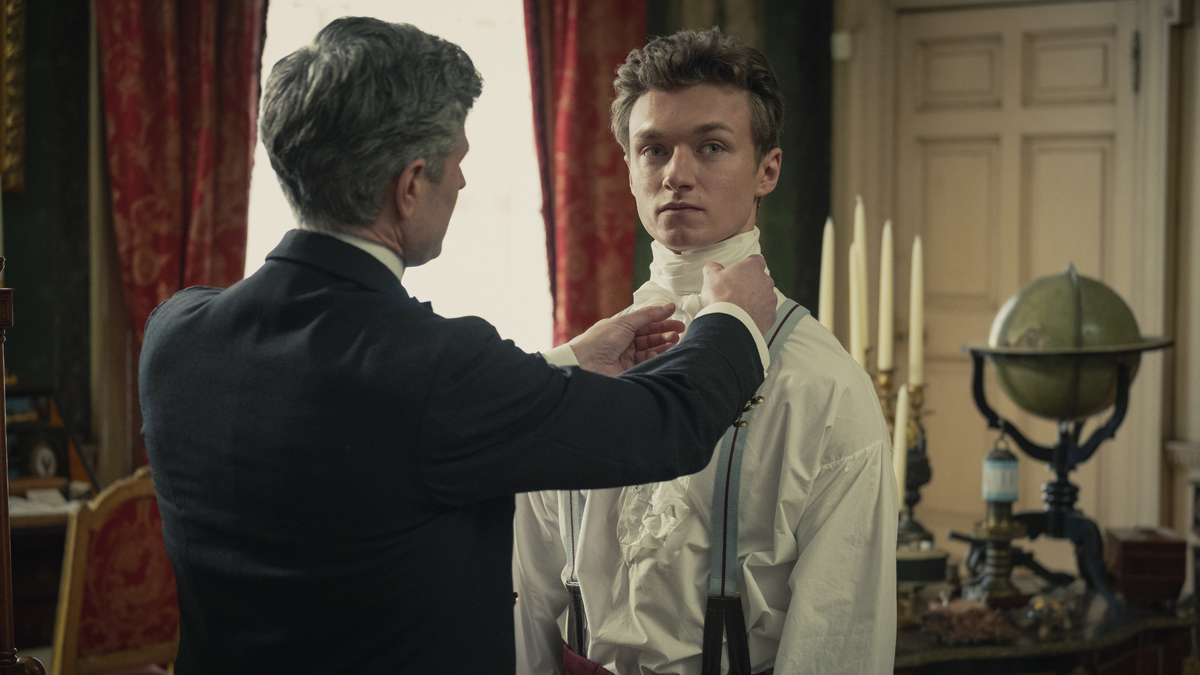 A tale of fearsome monsters with supernatural powers and an inter-dimensional battle to save the world, it’s fair to say that The Irregulars is not based on a true story. That doesn’t mean, however, that the new 19th-century set Netflix series doesn’t have the odd crossover with historical fact.

One crossover is the character of Leo, a privileged youngster who escapes from his gilded prison to see London for himself. In insalubrious Baker Street, he stumbles upon Bea, Billy, Spike and Jessie – fellow teens with considerably fewer means, who are on the trail of a baby thief. Leo’s quick mind and familiarity with the establishment make him a vital addition to the quartet, and soon, he’s part of their supernatural-crime-solving gang. Like Cinderella though, when the bell strikes a certain hour, Leo (Harrison Osterfield) has to abandon his new friends and dash off home.

Home, for Leo, is Buckingham Palace. He’s Prince Leopold – later styled Duke of Albany and Earl of Clarence, and the youngest of Queen Victoria and Prince Albert’s eight children. The only other royal glimpsed in The Irregulars is his older sister Princess Louise, who’s seen taking a fancy to Spike when he visits the palace. Queen Victoria is only glimpsed in portrait form on the show and Prince Albert was already dead by the time it’s set in the 1870s.

The real Prince Leopold was born in 1853. Like The Irregulars’ Leo, his short life was beset by ill health. From his mother’s side, he had inherited haemophilia, a condition that prevents the blood from clotting properly. That meant any injury or cut could prove fatal, stopping Leopold from following his three brothers and father into the military. Prince Leopold was also rumoured to suffer from epilepsy, which led to him living an unusually cosseted life (even for a royal prince).

Prince Leopold lost his father, Prince Albert, in 1861 when he was just eight years old. Due to his ill health, he was kept close to his mother and eventually came to replace his father as her unofficial secretary. Leopold was thought to be Victoria’s favourite son, though she failed to protect him from her Balmoral servant John Brown, whose family he called “fearfully insolent”, complaining that they hit him “on the face with spoons for fun”. (Nothing to do with The Irregulars, just a bit of historical colour.)

When Spike in The Irregulars describes Leo as the brain of the group, that tallies with what we know about Prince Leopold. Mentored by Disraeli and John Ruskin, among others, the Prince was an able scholar who – despite his medical complications – graduated from Oxford University in 1876 and afterwards, travelled in Europe. He had a reputation as a learned man, with a talent for chess and a taste for the arts, and was thought to be part of a social circle that included the writers Lewis Carroll and Oscar Wilde.

In the Netflix series, Leo is reluctantly matched with Princess Helena, a visiting European royal from a German principality. In real life, that’s who Prince Leopold married and had two children with – Princess Alice and Prince Charles Edward.

However, Prince Leopold sadly didn’t live long enough to see the birth of his second child. He died at the age of 30 after slipping and banging his head while on a trip to Cannes in the South of France (the bitter irony being that he’d been sent there for the sake of his health). After his death, Queen Victoria mourned greatly for him and was known to wear a locket containing a miniature of him and his older sister Alice, who had died from diphtheria. In Queen Victoria’s diary entry for the day Leopold died, she described his death as “too dreadful”, calling him a dear child who was bright, clever and gifted. The Queen outlived her youngest son by 17 years.

When Leo tells Bea in The Irregulars series finale that even if he were to live for a thousand years, their love will still be true, the character doesn’t know that his historical counterpart would barely live for the next dozen.

The Irregulars is streaming now on Netflix.