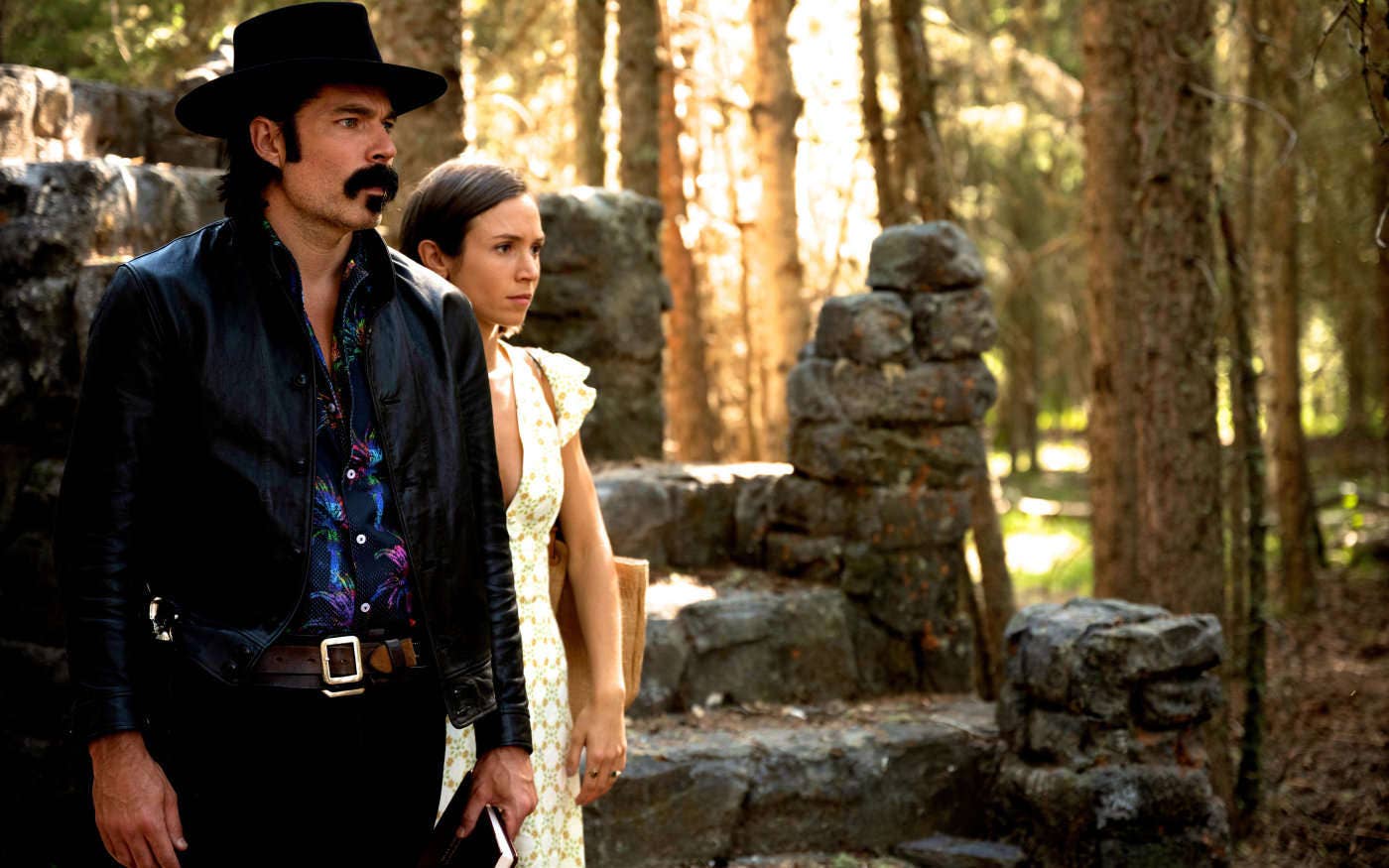 Like most good-but-not-great episodes of this beloved show, “Life Turned Upside Down” is an instance of Wynonna Earp biting off more narrative than it can effectively chew in one, hour-long installment. What starts as an episode that promises to delve further into Wynonna’s alcohol abuse and other mental health struggles and how they affect her loved ones quickly veers into a more action-forward story that sees Waverly kidnapped by her worst nightmare and BBD upper management initiating a plan that could end Purgatory (and some of our favorite recurring characters) forever. “Life Turned Upside Down” could have been three excellent episodes of television. Instead, by trying to shove all of this story into one installment, it ends up being one pretty great yet ultimately overambitious episode of TV.

“You know, I really thought we’d have a few years between your transition from fun drunk to mean alcoholic.” “Well, we don’t all have the option of happily ever after.” I’m sad we will never get to see the version of this episode that more fully dives into Wynonna’s current mental health struggles and alcohol dependence. Alcohol abuse is often glamorized and glorified on TV and film, especially when it comes to the lone, stoic warrior trope. It’s a depiction rooted in toxic masculinity, and especially in the western, a genre from which Wynonna Earp gets many of its narrative conventions. There’s a misunderstanding that toxic masculinity only impacts cis men, but that’s far from the case. In a patriarchal society that over-glorifies a constructed masculine ideal, toxic masculinity can affect anyone, and we see some of the worst of what that can look like in Wynonna’s Season 4B struggles. “You’re hunting all of the time. You’re not sleeping. You’re isolating yourself.” “No, I’m hunting alone, so until a new Chosen One rolls into town, whose old enough to drink…” Here, Wynonna equates being a “Chosen One” with alcohol dependence because, for her, they are inextricable from one another; she cannot comprehend a way to do this “job” without this particular coping mechanism.

What Wynonna Earp gets radically right in this episode opening is the focus on how this kind of “lone wolf” mindset affects other people. (“You seem so…” “Dedicated to keeping my friends and family safe?” “…Really sad. And lonely.”) One of the myths at the root of both toxic masculinity and toxic individualism is the idea that any one person can be an island. That it is possible to lock up your pain so tightly inside of yourself that it won’t touch anyone else. But to be human is to affect and be affected by the people around you. We touch one another, even when we try desperately not to, and this is something toxic masculinity and the glorified depiction of “the lone wolf” get so incredibly wrong. When you self-destruct, that self-destruction doesn’t happen to just you; it happens to everyone who loves you and, often, to people who don’t love you too. That knowledge can’t necessarily stop people from self-destructing, from feeling incredible pain and acting in harmful ways because of that pain, but hopefully it can get them one step closer to seeking help outside of themselves and realizing that, in doing so, they’re not just helping themself, but also helping everyone they touch.

This rich thematic exploration propels “Life Turned Upside Down” forward, but we never really get to see it come to any kind of fruition in this episode. Once Waverly, Wynonna, and Nicole leave the homestead after Wynonna and Waverly’s rough, raw, and probably helpful fight, the world butts in, as it so often does. Waverly is chased into the Ghost River’s mind-altering fog, and Wynonna and Nicole are desperate to save her. Initially unbeknownst to them, Waverly’s situation is even worse than they could have imagined: Waverly’s demonic “twin” Jolene is back, and she’s continuing her lifelong dedication to psychologically torturing (and then also physically torturing) Waverly.

Jolene is a manifestation of all of the negative thought patterns in Waverly’s head: Demons are just fallen angels [and] you’re one of them. / Does it ever get boring playing the role of damsel in distress? / Those are all of the lives that Wynonna has had to snuff out to save yours. Imagine the weight of all of that blood on her hands. / Stupid, selfish little angel. In Season 3, Jolene was ultimately unsuccessful in getting Waverly to die by suicide because Waverly was able to see the love and support her family and friends give her freely, and hear the untruth in Jolene’s lies. This time, Waverly isn’t able to do the same and it probably has at least something to do with how much Wynonna’s misery has been affecting her baby sister. There is more than one way to keep your loved ones safe and, while Waverly’s apparent turn to avenging angel is 100% not Wynonna’s fault; it also might not have happened if Wynonna’s definition of “keeping her loved ones safe” wasn’t so toxically narrow. Just because your pain belongs to you doesn’t mean it’s doesn’t sing to others, stirring up their own pain in return.

In accepting the dark narrative Jolene is whispering in her ear, Waverly makes a similar decision to the one Wynonna has been making since they got back from the Garden: To go it alone. To believe that there is something inherently and inescapably dark about her power. To tell herself hat she must get her hands bloody to keep her sister’s hands relatively clean. Something tells me that, in seeing Waverly make her own version of the choice Wynonna has been making these past few months, Wynonna might finally understand what Waverly was trying to tell her at the beginning of this episode: She wasn’t judging her; she was trying not to lose her.

Elsewhere in the episode, BBD’s much-discussed “upper-est management” have finally come calling, and it’s bad for pretty much everyone we know and love. Someone named General Graham is rounding up all of the “assets” left in the Ghost River Triangle and either killing them or loading them onto a metaphoric ark to get the heck out of dodge before the memory-altering fog swallows the entire region in just a few days. I was a little confused by the plot mechanics of all of this (maybe because I was so invested in what was going on elsewhere in the episode?), but it seems like there is a larger fight Graham is planning for. He spoke of a silo in Montana where he plans on bringing the supernatural people he’s rounded up in order to regroup and continue the fight. This all implies that the Big Bad, which is probably not the memory-altering fog but rather Eve or, and stay with me here, perhaps Waverly? Our favorite Sudoku-player ends the episode by ascending (or descending?) into some kind of dark angel, brought about by Jolene’s torture and the temporary belief that Wynonna is dead. “Your journey is over, Wynonna Earp,” Dark!Waverly tells her sister. “And mine has just begun.” Yikes.

Ultimately, I’m not sure the beginning of this episode matches the end. At the beginning of the episode (and in previous episodes), the series seems to depict that Wynonna’s alcoholism is a problem, but then the episode promptly swerves into demonstrating how the story that Wynonna tells herself that fuels that alcohol abuse (that she needs to kill to keep her loved ones safe) is actually kind of true. Wynonna does do a pretty good job trying to save her sister, even if ultimately she is unsuccessful. (Because Waverly isn’t saved, is she? She may not die, but she is forced to transform into something she explicitly says she does not want to be: “I don’t want to be an angel. I don’t want to be a demon. I just want to go home.” Rather: “I can be a hero and a wife.” That is Waverly Earp’s dream and, over the course of this episode, she seemingly moves away from that path.) Over the course of this review, I’ve thematic tracked a path between Wynonna’s self-destructive behavior and the path Waverly takes at the end of this episode, but, if this was what Wynonna Earp was going for with “Life Turned Upside Down,” they needed to connect the dots a little better. If not, well, then the point still stands.

As with other episodes of Wynonna Earp that don’t quite nail it for me, “Life Turned Upside Down” was still a hell of an episode to watch for anyone who cares about these characters and this show. Even when Wynonna Earp isn’t at 100% in terms of plot or theme, you better believe that the characterization and the actors who bring that writing to life are top notch. From the intervention to “It’s my fucking turn, Wynonna” to Rachel picking flowers to lay next to Casey’s corpse, I was emotionally riveted. And, while it’s different for every story-consumer, that’s what I care about the most. The rest is icing on the doughnut.

Wynonna calls herself a “chip off the abusive asshole block.” So much of the insecurities and issues that the Earp sisters deal with can be traced back to their abuse asshole father. It is, frankly, very impressive that Wynonna and Waverly were able to grow into such loving adults, given what they had to endure as kids.

Speaking of which: “Purgatory’s not a place where people get to be kids.”

“You’re my family.” “No, I’m not.” Poor Rachel. But also: she seems to be the most well-adjusted one here right now?

“Nobody wants to be an Earp. Earps always end up alone.” More story-lies that Wynonna tells herself that most likely started with her father.

“Clio’s the new Clanton heir and send the reapers to feed on a bus full of seniors.” Um, that is quite bad?

“I made you an apology castle roll.” I am so sad that Casey died.

“Those are humans… and Freddy.”

“I will come back to you; I just need her more.” While I did generally love the characterization in this episode, as previously mentioned, it didn’t work for me how vehemently Doc and Jeremy reacted when Wynonna chose to save Clio over them. I think they would have trusted that she had a plan? Then again, maybe they’re just terrified for their lives.

Rachel is so sweet.

I continue to feel bad for Billy.

“Get your hands off my sister, you unholy bitch.” Peak Molly Weasley vibes.

“If we cannot use our brawn, let us use our heads.” I love Doc so much.

Did anyone else feel like the BBD subplot was just a carousel of people coming to break the BBD prisoners out and failing?

I love this show’s commitment to exposed midriff.