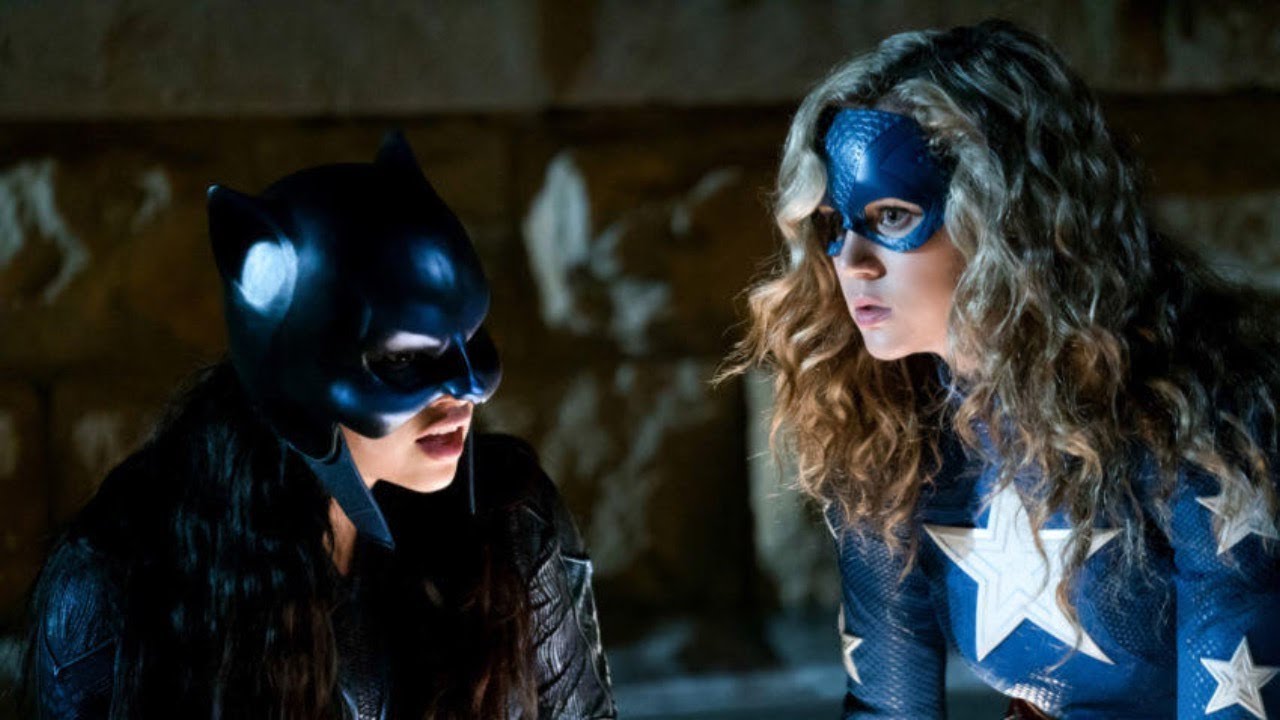 AfterBuzz
Share on Facebook
Share on Twitter
Share on Pinterest
Share on LinkedIn
#stargirl #CW #review
Episode 3
We learn more about Jordan Mankent aka Icicle, the leader of the Injustice Society.
The episodes begins with a flashback from 8 years ago as we see Icicle’s wife dying.  On her deathbed makes him vow to continue with the nefarious unknown plan, with the words “if anyone tries to stop you, destroy them.”
Courtney leaves school and sees a star shape frozen on the field, a message from Icicle to Courtney.  Courtney and Pat figure out a plan and go after Icicle.  Icicle freezes Pat after taking a hit and makes a bus go off the bridge.  Pat frees himself in time to save the bus, Joey is caught in the crossfire as he is hit by a car.  This ends the fight but later The Wizard, Joey’s father goes after Icicle.  Icicle freezes The Wizard causing the death of both leaving only the mother, Denise who is overcome with grief.
Courtney hears about the rest of the team and decides to recruit a team for herself as well.  Cameron goes home where we see he is Icicle’s son.
Episode 4
We start off with a flashback, this time 4 months ago, where a contrasted happy Yolanda is sending a sexy picture to her boyfriend.  The boyfriend turns out to be Harry, and he sends this picture to everyone in school, causing everyone to turn on Yolanda, including her family who is disappointed in her and treats her poorly afterwards, giving us a backstory on why Yolanda is so distant and bullied.
Meanwhile Denise, The Wizard’s wife, decides to leave town.  She meets up with Pat to let him know there is something diabolical and more going on in the town.  Later when Pat goes to the scrapyard for parts, he sees Denise’s black cat.  Further investigation leads to seeing her car destroyed with no traces of her.
Episode 5
That night they go to a Halloween Party.  Yolanda is not happy with Beth’s inclusion.  They find Rick who they were looking for.  They corner him in the garden and tell Rick about Hourman, Hourman’s powers, his connection, and his legacy.  Rick is not interested in joining the team but does keep the Hourglass.  Yolanda and Courtney get Rick to open up about his parents and their death, which he does but is still not interested in joining the team.  Beth convinces Rick to be a part of the team by expressing he could extract revenge.
Principal Bowen is confirmed to be The Fiddler, as he plays his violin to take control over a couple of truckers with the doctor.
Episode 6
On this episode RECAP:  DC’s STARGIRL – SEASON 1 – EPISODE 6 – Justice Society of America – Courtney has recruited a new Justice Society with the kids in her highschool and Pat is not happy.
Pat goes to Rick’s to get the hourglass back.  Courtney decides to speak to Yolanda and Beth for their artifacts back as well.  Yolanda and Beth refuse and simply walk away.  Rick does the same thing to Pat.  Courtney tries to speak to her friends after school as well.  Rick shows up and tries to express they do not need Pat.  Courtney sticks up for Pat but reluctantly agrees to go on their investigation further into the Injustice Society, against Pat’s wishes.
Icicle sends The Gambler to prepare the two people from the beginning of the show who turn out to be Sportsmaster and Tigress.  The Gambler then goes on his own mission for the plan.
When Pat gets home he realizes Courtney is out with the team.  He goes in search of them as the new team in their new suits go into a building.  Tigress and Sportsmasters are also in the same building and a huge fight breaks out.  Great fight screen leads to Tigress and Sportsmaster retreating upon Pat’s arrival and helping out.
Icicle is happy about new missile codes The Gambler was able to retrieve.  Now they need Brainwave.  They also determine to find out who the new Justice Society members are.
All this and more on the Afterbuzz Aftershow.  Stay tuned.
Be sure to check out the After Show hosted by: Tehran Non Ghasri & Jeff Williams

For more After Shows for your favorite TV shows and the latest news in TV, Film, and exclusive celebrity interviews, visit http://www.AfterBuzzTV.com
Make sure to subscribe to AfterBuzz! – http://youtube.com/afterbuzztv