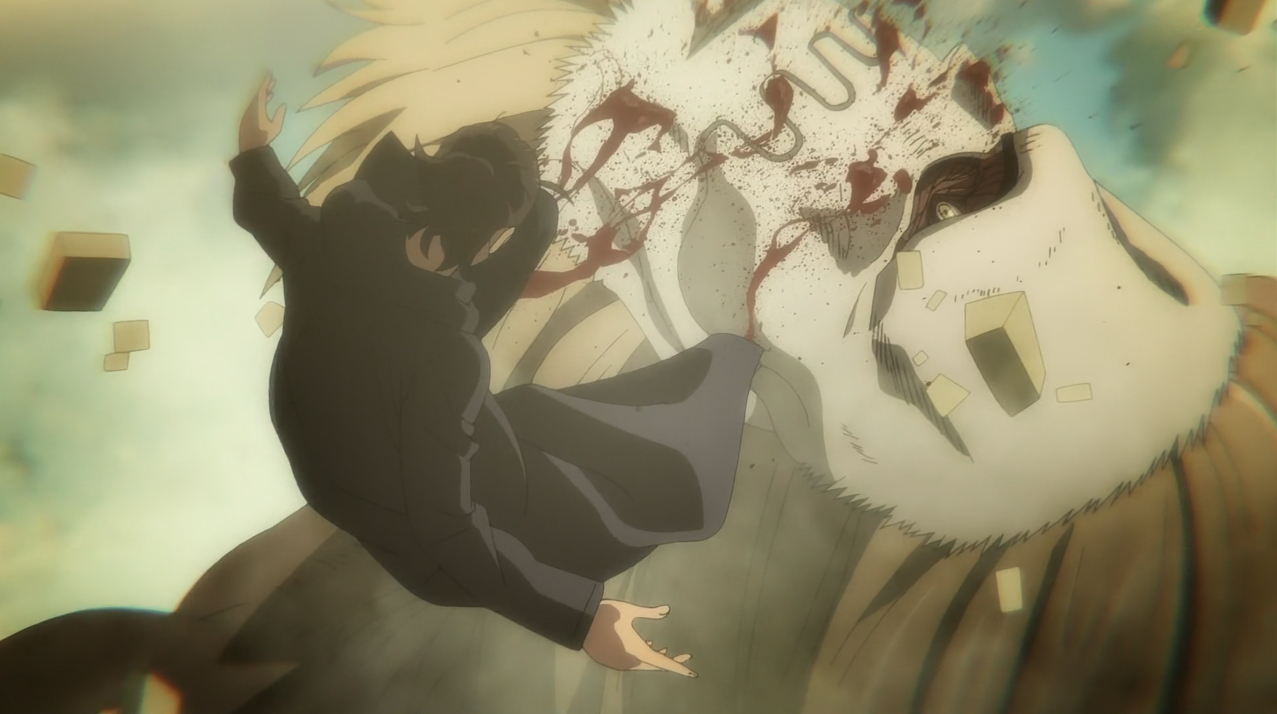 “There’s much to learn from an enemy.”
“Including how to make more enemies.”

Attack on Titan treats the Titan serum as one of the most powerful substances that can pollute and transform somebody’s body, but this final (sort of) season proves that denial and egotism make an even more dangerous cocktail. There’s a simple scene between Yelena and Dot Pixis where the latter is forced into submission and almost seems to respect Yelena’s cold and calculated ability to double cross her own people in favor of the changing tide. Yelena chastises Pixis for his decision to not side with her, Zeke, and Eren sooner, but it’s really a conversation that’s applicable to everyone.

Yelena and Pixis’ discussion functions as an elegant microcosm to the larger debates that break out between every faction of characters whose beliefs become at odds with one another. Scrutiny isn’t always a bad thing and characters like Eren used to understand that. Yelena doesn’t know if she’s right. Nobody knows if they’re right. However, these characters have been pushed this far and committed so many sins that considering anything else would be sacrilege. Delusion has become the new religion because doubt is now a force that’s more destructive than bullets. “Above and Below” is not the very end of Attack on Titan, but it does close the book on a lot of its past and presents very changed teams for the upcoming final battle.

Much of the second half of this season has been focused on the many pieces of Zeke, Eren, and Yelena’s master plan. “Above and Below” puts it in plain sight and wants the severity of these actions to be out in the open. Everyone believes that this strategy involves reuniting Zeke and Eren to trigger the Rumbling, which is true, but Yelena hints at an even more grim solution that involves either Eldian euthanasia or sterilization to permanently remove them as a threat to the Founding Titan.

It’s a bleak endpoint for the series and the stakes have reached such a diabolical level that characters act as if their brains have overheated and nothing makes sense anymore. Jean is still in disbelief over the nature of Eren’s actions and it’s hard to tell if Armin is actually moved by Yelena’s impassioned speech regarding Zeke and Eren’s intentions or if he’s just lost it. Attack on Titan has reached a fascinating point where it’s hard to take anyone’s reactions at face value or consider if they’re part of a more intricate con, which is perhaps most prevalent in Gabi and Pieck’s encounter with Eren.

This whole season has carefully juxtaposed the later stages of Eren’s journey with the first steps in Gabi’s adventure. Both characters are presented with many flaws, but it’s been a challenging process to put Attack on Titan’s previous baggage aside and attempt to accurately determine which of these characters is the lesser evil and “more right.” Gabi and Eren have extremely similar backgrounds, but these episodes have pitted them against each other and made a showdown feel inevitable. “Above and Below” creates a ton of tension when it forces Gabi into an unlikely alliance with Eren after he uses Falco’s life as collateral. These two reflections of the same image must work together and this becomes a more stressful exercise than if Eren and Gabi were locked in combat.

It’s also pretty perfect that during this pact Eren refers to Gabi as “the brat who killed Sasha.” Not only does this indicate that he might not even know Gabi’s name, but he so casually throws around Sasha’s death in a way that emphasizes just how hollow he’s become inside. Eren promises Gabi the safety of Falco if she works with him, but I wouldn’t have been surprised in the slightest if Eren just pulled out a gun and shot Gabi and Falco in the head after he gets what he wants.

It’s utterly crazy that in only a season’s worth of time it’s now very easy to picture Eren–the show’s protagonist–in this disaffected light. There have been frequent moments this season where Eren’s dark turn has reminded me of Walter White’s descent in Breaking Bad, but there’s a lot of overlap between the two of them as Eren presses his forehead against the barrel of Pieck’s gun and fearlessly taunts her to pull the trigger. This meek individual has turned into someone that’s now more frightening than the person with the loaded weapon.

Slices of Pieck’s backstory come forward during this hostage situation and it acts as another slick way to remind the audience that every player in this struggle is a real character with a life, family, and people that they care about. The enemies aren’t just mindless monsters anymore. Eren remains unphased, but his smug demeanor disappears when Pieck and company are the ones that pull off the surprise betrayal. Eren narrowly survives, but it shouldn’t be dismissed that these plucky kids nearly killed Eren and ended this whole thing.

Despite how you feel about Gabi, Pieck, or the Marleyans, it’s hard to deny the brilliant nature of this plan. It also allows some cathartic momentary justice for Porco Galliard and his Jaw Titan, who Eren used to kill the Warhammer Titan, but also nearly killed himself and tried to gruesomely disfigure. It’s inspiring to see all of these Marleyan fighters spring together when nearly everything else is left in disarray.

It’s impressive how focused Attack on Titan’s season finale is and there are major threads from the past few episodes that are left unresolved. I can’t imagine how someone that believed that this was the anime’s very final episode would feel around the halfway point when “Above and Below’s” leisurely pace is established and it’s clear that nothing is really getting resolved here. It’s a surprisingly subdued finale and it’s telling that the episode’s priority is to make the ideologies of the different sides of this war crystal clear.

Major characters are shelved to the background and material that seems like it would have been the focus of this episode, like if Levi and Zeke are still alive, gets brushed aside. Even larger questions remain unresolved such as whether Falco is effected by the small amount of Zeke’s spinal fluid that he inadvertently ingests. This season teases the return of Annie as well as Historia’s pregnancy, but these exciting storylines now feel slightly hollow with no payoff. Some of these developments may have worked better if they were held off on entirely until the next batch of episodes.

“Above and Below” makes a lot of decisions that a season finale shouldn’t do and in many ways it feels more like a regular episode that only tells a fraction of its story and is dependent on the episode that follows. With what’s covered in this finale it wouldn’t have been impossible to deliver a version of this episode where some of Reiner and Marley’s attack against Eren actually happens. “Above and Below” pointedly concludes just as chaos breaks out and it intentionally leaves the first strike of this war for the final final batch of episodes. What this speaks towards is how these sixteen “final” episodes really act as more of an extended prologue for what will really be the concluding installments of this incredible series.

This bait and switch isn’t a problem, but there are likely many people that blindly went into this season with every expectation that it’s the ending, only to figure out the hard way that this isn’t the case. This could sour some viewing experiences, either for this finale or the season as a whole, especially since Part 2 isn’t coming out for practically an entire year.

It’s not dissimilar to the understandable outrage that some people experienced towards Final Fantasy VII Remake when they learned that it’s part one of a series and doesn’t cover the full story. It wouldn’t have been difficult to add Part 1 to the new Final Fantasy game, but it’d be even easier to have added it to Attack on Titan: The Final Season. If anything, showing that this final season requires two sections to be fully covered would create greater anticipation for the epic story that’s being told.

It’s a minor complaint against an exceptional season of television and one that will become irrelevant after all of the episodes are released. The structure of this season’s release doesn’t rob these episodes of their layered storytelling, stunning point of view work, and the emotional gut punch that’s accompanied the transformation of the series’ beloved characters.

“Above and Below” is an unusually direct installment and at one point Pieck asks Gabi, “Are we Marleyan? Or are we Eldian?” This question will be more important than ever as Attack on Titan heads into Part 2 of its Final Season, yet the audience already seems to understand that there is no difference between the two. These are all just people that want to have futures full of possibilities and families and friends that can thrive rather than live in fear.

This may seem like a glib oversimplification to a very busy season of television, but the conflict has literally built to a point where the embrace of two brothers will cause catastrophic danger. Hugs and handshakes are now tools of destruction and the situation between Eren and Zeke becomes metonymic for all of humanity. Reconciliation is impossible and there’s an overpowering feeling that Attack on Titan can only end in complete annihilation.

The War for Paradis begins in Winter 2022!