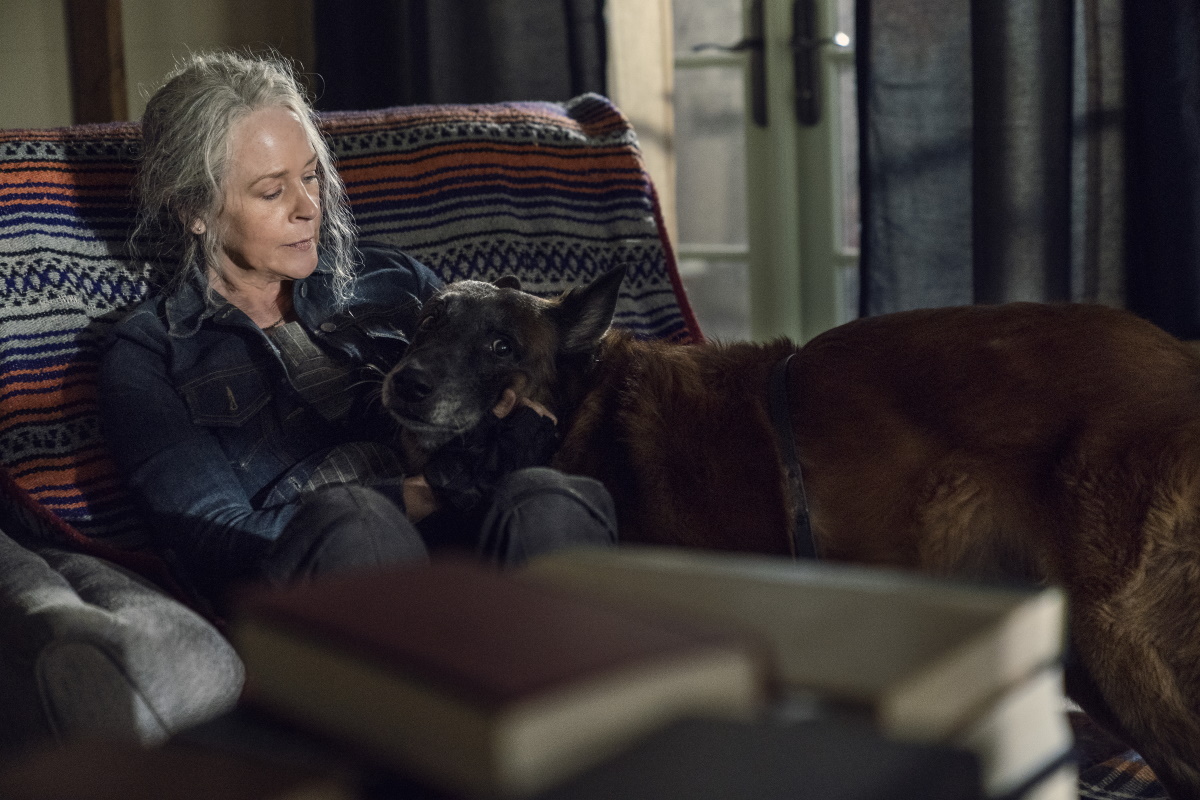 Robert Frost wrote in his poem “The Road Not Taken” about two roads diverging in a yellow wood. while the wood Carol and Daryl are walking through in “Diverged” are green, not yellow, the principle is the same. Two long-time friends slowly growing apart, faced with a literal diverging path in the woods. Daryl heads one way; Carol goes another with Dog at her side. As a metaphor, it’s smack-dab on the nose, but that isn’t necessarily a bad thing when both characters are intensely aware of just what’s taking place between them. They’ve walked side-by-side through hell together, but at a certain point, every journey together ends on The Walking Dead.

That’s the heaviness hanging over a pretty neatly bisected episode following Carol (Melissa McBride) down one path and Daryl (Norman Reedus) down the other. Daryl gets the opportunity to be alone with his thoughts while trying to scavenge a replacement spark plug wire for his motorcycle. Carol heads back to Alexandria and finds herself adrift in a sea of people, suddenly surplus to requirements with nothing to do except putter around in the kitchen and try to rustle up a little stone soup for Jerry (Cooper Andrews) and the Alexandrians. Times are always tough in the post-apocalypse, but with extra mouths to feed from Maggie’s group and a city still recovering from the destruction at the hands of the Whisperers, it’s not surprising that Alexandria has everything except for food and time.

The episode that follows is basically wordless, with Carol spending most of her time talking to Dog and Daryl spending most of his time muttering to himself as he checks abandoned cars for functional wire to use to fix his bike and get back home while Carol embarks on a similar scavenging mission out in the nearby forest for greens to add to her pot of soup. Their journeys dovetail pretty neatly. Daryl runs into some walkers and has to kill them. Carol runs into some walkers and has to kill them. Daryl finds some discarded supplies on the bodies of a couple of paratrooper walkers he has to kill. Carol finds some dandelion and nettles she’s able to make into soup. Daryl has to go through the process of getting his bike repaired and heading back home, while Carol gets distracted and engages in a little radical pest control.

It’s a tough thing to make something interesting when it’s a person with no other humans to interact with, but “Diverged,” in particular the Carol sequences, is a lot of fun. She’s got fan-favorite Dog to play off of, and watching Carol destroy her kitchen in pursuit of a rat that’s been skulking around is a a delight. It’s as close to a straight-ahead comedy that The Walking Dead has ever done. Melissa McBride is nothing if not charismatic as this character, and viewers will be invested in watching Carol look more like the Carol who ingratiated herself to Alexandria with molasses cookies rather than the depressed shell she has been, or the remorseless killing machine she’s been in the past. Carol is still struggling with her place in the world, but it’s a more relatable sort of struggle (especially for those of us who live in old buildings).

That her only two-legged scene partner is Cooper Andrews’ Jerry, another fan favorite and the anti-Carol, only helps to make the character’s scenes work stronger, with Heather Bellson making every mutter, aside, or hushed whisper to Dog and/or Jerry work to give us what’s going on in Carol’s head without direct statement. Carol wants to do something, anything to be helpful, because Carol is one of those people who is unable to take a break.

Jerry works hard, but Jerry also seems like he’s got no problem enjoying his down time, and where Carol’s smile is only skin deep, Jerry’s emotions are on his sleeve for the world to see. Jerry’s confession that he only asked about the soup to check on Carol is nothing if not sweet, and the sheer mass difference between Andrews and McBride makes their scenes a visual joy, if nothing else. Carol, lean and mean. Jerry, big and lovable. Daryl, still surly, but with time and space to cool off a little.

Melissa McBride, in particular, deserves credit for really making all this stuff work in concert with director David Boyd. Carol is chasing what is essentially a camera on the floor, it’s high energy and chaotic, and all the while Dog is just serving up great reaction shots. It shouldn’t work, especially not when you consider just how hungry everyone in Alexandria seems to be, but it’s a much-needed laugh break. It’s a heavy-handed metaphor; Carol is chasing the rat mostly because she needs something to do other than think about missing her friend and that she can’t really help anyone, but it’s fun and light and charming, and something The Walking Dead doesn’t indulge in.

Does it resolve anything between Carol and Daryl? Not especially, but Carol, by chasing her rat, makes it clear she’s not just going to run away from this particular problem or from her home in Alexandria. Daryl gets his bike working again, and maybe gets the opportunity to burn off a little excess emotion in a safe way. If nothing else, the chilliness between the two in the beginning of the episode has thawed by the end, so perhaps it’s a reset back to the pre-fight status quo even if no one apologized for anything. Maybe, like a lot of friends, they just needed a little time apart to remember why they like one another.

Was this little excursion necessary? Not in the purest sense of the word, but when combined with “Find Me” it brings the mini-arc of Carol and Daryl’s relationship strain to a relatively satisfying conclusion. Any time it’s possible to dig deeper into the minds of the characters, to stress their relationship and strengthen their bonds, it’s a good thing to do (especially in a fairly contained bottle episode). Undoubtedly everything with Connie isn’t resolved, but if nothing else, they can put this little incident past them and realize just how much they need each other. Carol might be broken, but her real friends don’t care. She could run away again, but she’d only be leaving behind people who need her to look past their damage and love them.