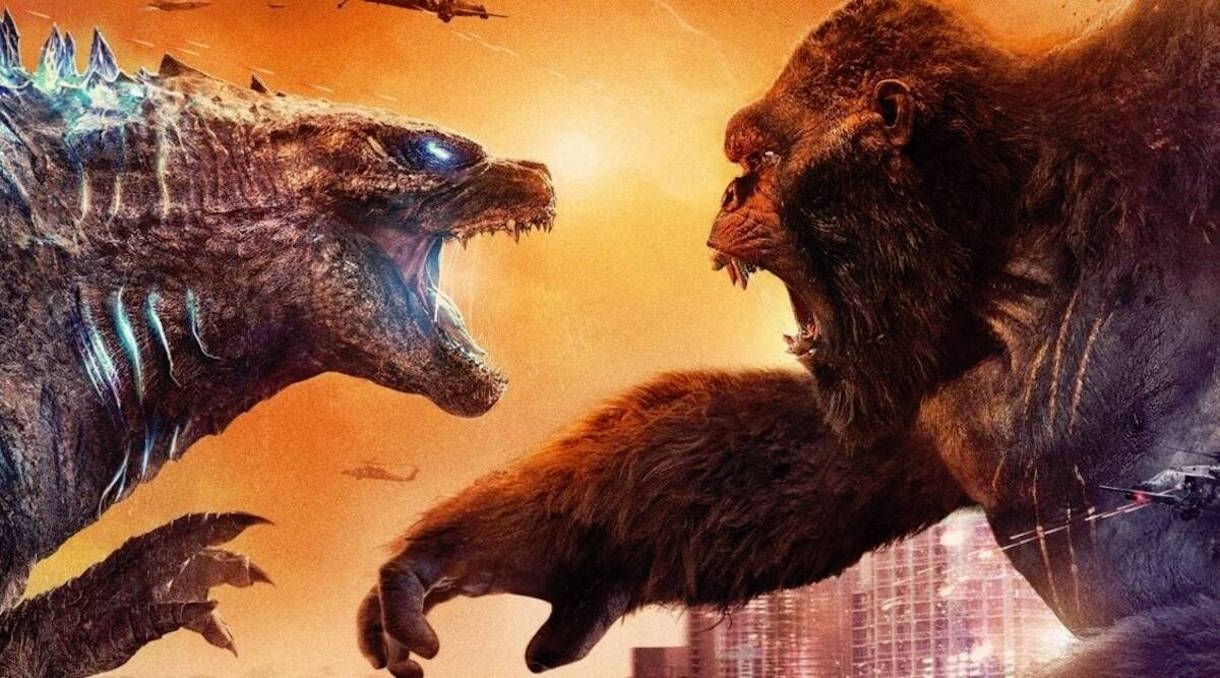 Ever since Warner Bros. and Legendary Pictures announced they were building a “MonsterVerse,” this is the fight everyone’s been waiting for: Godzilla vs. Kong. Fire meets fur. As the undisputedly most popular monsters in movie history, King Kong and Godzilla are responsible for the entire idea of a “kaiju versus” film thanks to their first bout nearly 60 years ago. Since then they’ve each appeared in countless sequels, spin-offs, and reboots. But never again have they crossed paths. Until now.

Some might say that’s because one movie isn’t big for the both of them. After all, there’s a reason why each has coasted to the top of our Movie Monster March Madness bracket, right? But we disagree with the idea that you can’t choose. There should be a clear cut winner in Godzilla vs. Kong, and Den of Geek editors David Crow and Alec Bojalad are ready to go to the mat over who that should be.*

David Crow: It took several years after the original Ishirō Honda masterpiece, Gojira, was released for it to reach the U.S. When it did, the Western distributors clearly got a lot of things wrong: the awkward inclusion of American actor Raymond Burr; the removal of all direct allusions to the Bikini Atoll nuclear radiation disaster; and not nearly enough mad scientists with eye-patches. But what they got right? The title. It was all right there when the film became an international phenomenon–Godzilla: King of the Monsters! (even the declarative exclamation mark is theirs).

Godzilla might’ve been the second big guy on the scene, but ever since he lit Tokyo up like a Christmas tree, he’s been first in our hearts. From ‘56 to 2019’s Godzilla: King of the Monsters, there’s only been one undisputed reigning titan, and he’s not a gorilla. King Kong is good enough for an island no one’s heard of, I guess. But Godzilla? He’s been the top dog all over the world, and he’s more often used that supremacy to protect all of us from intergalactic aliens and ancient monsters… as opposed to only having eyes for blondes with a healthy set of lungs.

In terms of physicality alone, Godzilla has an advantage in reach that exceeds even his towering height. With nuclear fire breath that can span the length of 15 devastated city blocks, Godzilla should be able to cook Kong before he ever gets down from the Empire State Building.

Alec Bojalad: Who would win in a fight between Godzilla and King Kong? The only possible answer here is the big monke, himself: Kong.

Do me a favor real quick. Head on over to the Homininae Subfamily Wikipedia page. Take a look at the header photo and let me know what you see. A chimpanzee, a gorilla, and… a human being. Of course we all know that humans and gorillas are closely related, but for the purposes of the monster fight to come, it’s important to see just how closely related we are. To argue that Godzilla has a prayer in a fight against King Kong is to argue that a big dumb lizard could ever triumph over the ingenuity of the human species and our homininae subfamily.

As one of humanity’s closest cousins, Kong brings so many things to a fight that his scaly counterpart just can’t. Let’s start with the obvious: Kong is strong. Those rippling arm muscles and pectorals of iron aren’t just for show. Kong is also highly intelligent. Observe his use of tools in his many film appearances throughout the years, up to and including his big whooping stick in the Godzilla v. Kong trailer. And if raw strength and intelligence weren’t enough. Kong is highly lithe and nimble. That should prove quite useful in battle against the largely inert Godzilla

Look, I don’t mean to body shame this very chonky lizard. In fact, I admire his dedication to not skipping meals. But when it comes time to face off against a quicker foe, all that raw strength is gonna hold him back. As any boxing fan could tell you: speed beats strength 100 times out of 100. That’s why Kong won during the pair’s 1962 matchup and it’s why he’s going to win again now.

About King Kong vs. Godzilla…

David: Alec, I’m glad you brought up King Kong vs. Godzilla (1962). It’s a solid throwdown between ape and lizard that arguably invented the monster mash-ups we’re still enjoying to this day. All that said, Zilla was ripped off in the movie.

Back in ‘62 , Godzilla was the new kid on the block, and Kong was the legacy pick, with King Kong (1933) being the paterfamilias kaiju movie before Toho Studios made that word a thing. However, they did make it a thing, and Godzilla was already doing monster battles with glorified armadillos in Godzilla Raids Again (1955), back when a “King Kong vs.” movie was still a twinkle in special effects guru Willis O’Brien’s eye. So as the sentimental fan favorite, Kong was basically rigged to win while Zilla was just playing the Heel. But I’m going to let you in on a secret every wrestling fan knows: deep down everyone all prefers the villain.

So yeah, the lizard lost round one, but he took a fall for the good of the genre. Almost every time since then, however, he’s been on the side of the angels (or at least Venus princesses, look it up), protecting us from three headed dragons who’d eat Kong’s lunch.

And saying Godzilla isn’t smart? This is a beast who, in the American MonsterVerse, has been around since the time of Atlantis. Kong is just the youngest in a long line of gorillas while Zilla has the age and wisdom of a god. Underestimate that experience at your own peril.

Alec: Sure, David, we all enjoy a good villain. But how often do they win? Godzilla’s resume is just L after L. Godzilla lost to Kong in ‘62, he lost to an oxygen destroyer before that in ‘54, and he lost in ‘98 to Matthew Broderick (but to be fair, we all lost with the existence of that movie). And doggone it, he’s going to lose again in 2021.

Perhaps I shouldn’t have denigrated the beast’s intelligence because I must concede that Zilla is pretty sharp for a lizard. Kong, however, is smarter, more adaptive, intuitive, and quicker in thinking. Godzilla’s nuclear-powered fire breath is certainly formidable to lesser monsters, but Kong is just too elusive for it to prove that big of a threat. Imagine Godzilla’s confusion upon watching Kong simply sidestepping a fire blast. Huh, Ghidorah didn’t do that. Yes, Godzilla, that’s because Ghidorah is very slow. Just like you, I’m afraid.

A Skull Islander or the Savior of the World?

David: First of all, that was not Godzilla in ‘98. It was a stinky-breathed fish-eater from the hacks who got lucky once because of Will Smith. Toho Studios corrected them though when the real Godzilla turned that American monstrosity into a marshmallow in Godzilla: Final Wars (2004).

But if you don’t remember, I can understand since Godzilla has won far more bouts than he’s lost over the years, from American embarrassments, onward. That’s because Zilla has been putting in the work. Ghidorah? A three course meal. Biollante? Fertilizer. Gigan? Who even cares. Mothra, arguably the smartest of all the kaiju, and a celestial creature with the gift of flight and her own cult, more often bows down before Zilla as a friend. Why? Because of respect.

Meanwhile what’s Kong been doing? Hiding like a coward on a rock in the Pacific. If he’s so tough, why didn’t he ever leave Skull Island in the MonsterVerse while Godzilla was busy saving the world? Because he’s scared. He knows pound for pound, he doesn’t have the strength or the cunning of Godzilla. The original Kong was slaughtered by biplanes; Zilla eats jets for breakfast. Filmmakers had to size the new Kong up to even have a ghost of a chance. It won’t save him.

Alec: There is no doubt that Godzilla’s won more bouts than he’s lost because Godzilla only faces monsters he can defeat. Biollante is literally a plant. What, was Audrey II from Little Shop of Horrors not available? Mothra bows before Godzilla? Well, I would too if I were a highly flammable bug. Ghidorah is a solid enough victory, but Ghidorah also doesn’t have Kong’s advantages.

Sure, Kong spends most of his time on Skull Island. You know why? Because he appreciates some gosh darn peace and quiet like the king he is. Kong doesn’t need to prove his mettle by trading fisticuffs with whatever misguided kaiju comes knocking at his door. He’s perfectly happy to spend his days eating comically big bananas and kicking back. Why not outsource the world saving to Godzilla, who seems pathologically obsessed with proving that he’s a big, scary monster whenever he can? Kill all the Ghidorahs and knock down all the buildings you want, dude, it’s not gonna make up for the emptiness inside.

Ultimately, however, I’m confident in a Kong victory over Godzilla for one reason above all. Godzilla has such a glaring physical weakness that it almost feels rude to point out. When things get really heated in this matchup, and the punches start actually flying, what is Godzilla going to do with those itty bitty T. Rex arms? I’ll believe Godzilla has a shot against Kong when I see him raise his arms over his head.

David: Don’t worry, Alec. You’ll see him raise them high enough when he stands victorious over Kong’s smoldering corpse. With fire breath like that, his reach far exceeds whatever big rock the wittle bitty ape thinks can save him. And while I cannot see the future, I suspect on March 31 we’ll both see the denizens of Skull Island bow down in awe. They’re about to meet their real god, and this one won’t die on them because of “beauty.”

Alec: Damn, now I almost want Godzilla to win just to watch him try to raise up his baby arms. Sadly we won’t get to see that spectacle. Come March 31, Kong is going to make Godzilla rue the day he ever crawled out of the sea on his belly.

Godzilla vs. Kong opens in theaters and premieres on HBO Max on Wednesday, March 31.

*Editor’s Note: This conversation was recorded before either editor reviewed Godzilla vs. Kong.