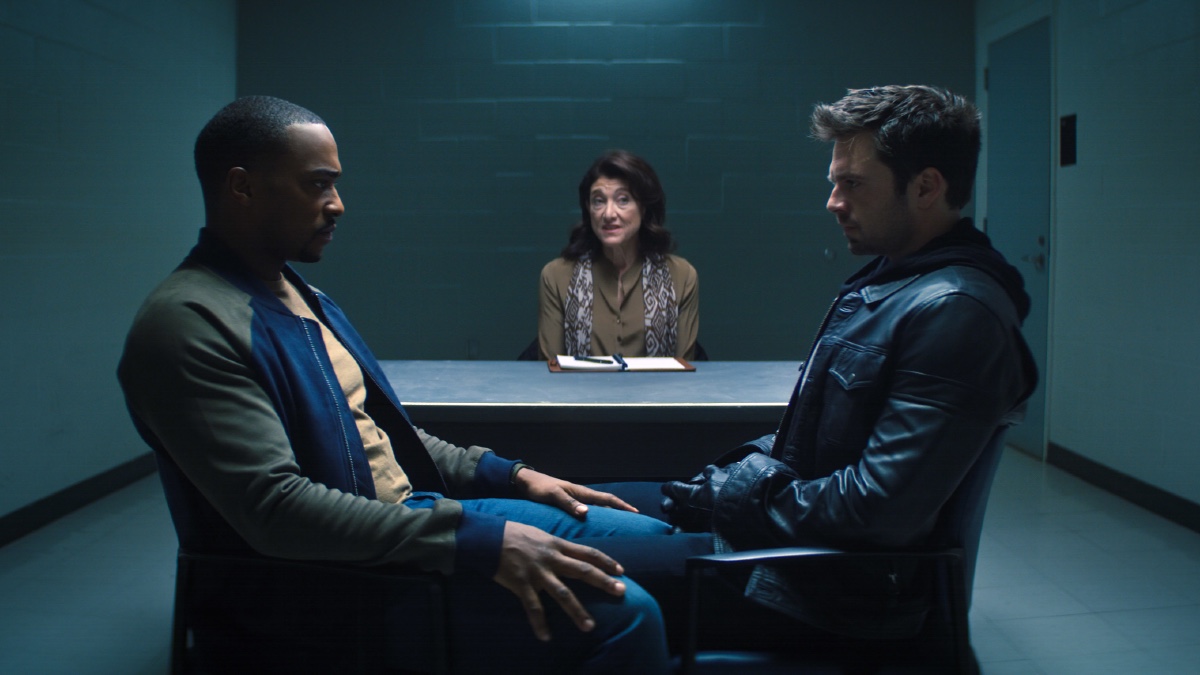 This article contains spoilers for The Falcon and The Winter Soldier.

Alongside an undercover Sam Wilson and Bucky Barnes, Zemo is in the Lowtown underworld of Madripoor trying to score a meeting with the Power Broker. When things are going poorly and the trio is forced to defend themselves, Zemo decides to pretend that Bucky is still the brainwashed Winter Soldier who can be controlled through some helpful Hydra keywords like “Winter Soldier. Attack.”

This is a fine plan that has its intended effect as the group is brought in to see one of the Power Broker’s underlings, Selby (Imelda Corcoran). But it also raises some questions as to how Zemo was so confident the ruse would work. How, exactly do the citizens of Madripoor not realize that Bucky Barnes isn’t in the brainwashed super soldier business anymore? Do they not clock the new haircut? Or more importantly, do they not recall six months ago when Bucky was on the side of the good guys in the climactic battle against Thanos? It appears to be common knowledge in the U.S. that Bucky is on probation and no longer subject to the whims of his Hydra programming thanks to his time in Wakanda. Did word of that just not reach Madripoor somehow?

The unclear nature as to what the people of Madripoor know about Bucky Barnes on The Falcon and The Winter Soldier is part of a larger series of questions about what the people of the Marvel Cinematic Universe know about their own universe itself. Simply put: what do these “normal” folks know about all the superheroics that have been happening all around them for the past decade?

A big part of the MCU’s appeal is the interconnected nature of its films, TV shows, and the extended universe in which they take place. It’s always fun when one hero crosses over into another hero’s story like The Hulk in Thor: Ragnarok or Black Widow in Captain America: The Winter Soldier. What’s even more interesting, however, is when those characters’ existences are acknowledged by the non super-powered everyday folks on the ground in unrelated movies.

The franchise’s two Spider-Man movies are particularly adept at pulling this “Marvel heroes as background noise” concept off. In Spider-Man: Homecoming, Spidey comes across a group of criminals robbing a bank while wearing cheap Avengers masks. In that same film, Peter’s class is subjected to boring public school PSAs from Captain America. Then, in Spider-Man: Far From Home, Peter becomes emotional upon seeing graffiti honoring the dearly departed Tony Stark.

The “normies” of the Marvel Cinematic Universe, the everyday Janes and Joes who go to work, make Lean Cuisine dinners, and watch Jeopardy!, are all clearly aware of the dozens of superheroes around them. How could they not be – living in a world that seems to come under existential threat every few years. Five years ago half of them literally disappeared into dust! It’s a traumatic existence for your average MCU citizen.

While the existence of Avengers and other super-powered individuals as public figures and even celebrities has been a big aspect of MCU films thus far, Marvel’s first two TV Disney+ properties have expanded upon the concept even further.

In WandaVision, several of the non-hero characters have a surprisingly thorough understanding of what went down during the battle against Thanos. Monica Rambeau notes that Wanda came close to taking down the Mad Titan then FBI Agent Jimmy Woo follows up saying that Captain Marvel fared pretty well herself. It’s as though the pair bought tickets to Avengers: Endgame to view the action themselves.

Then in The Falcon and The Winter Soldier’s first episode, Sam Wilson is seen as a full-on celebrity. A bank loan officer wants to get a selfie with him, even after he denies his loan request. In episode 2, some local beat cops seem pretty embarrassed to have harassed the mighty Falcon rather than just some random, eminently harassable Black man. In that same incident, the officers recognize Bucky and say they must regretfully bring him into the station for violating his parole.

Which brings us back to The Falcon and The Winter Soldier’s third episode. Madripoor may be a fictional country within Marvel comics and the MCU, but can it really be so removed from the rest of the world that its citizens don’t know the status of Bucky Barnes’s brain? What on Earth do the people of this world actually know about all these heroes?

Well, we’re not just all about asking questions here, so I will endeavor to provide some educated guesses.

To imagine what living in the Marvel Cinematic Universe would be like, we don’t really have to think that hard. Sure, our own reality might not be nearly as chaotic as Marvel’s. Half of us didn’t suddenly disappear five years ago. But you know what our reality and the MCU’s have in common? The inescapable presence of lots and lots of Marvel superheroes.

Marvel is one of the most infamous pop culture entities on the planet right now. Since Iron Man first premiered in 2008, the MCU has featured 23 movies, two Disney+ TV shows, and many other tenuously connected series. All in all, these movies have grossed nearly $23 billion worldwide.

But for however massive Marvel is, it’s still not universal. There are more than 7 billion people on both our planet and presumably the Marvel Cinematic Universe’s as well. With a population that size, there are plenty of people who don’t know or care to know about the particulars of Marvel’s heroes.

Stan Lee liked to say that every comic is someone’s first comic and FWS appears to have taken that to heart with some highly expository dialogue throughout. Many viewers are certainly aware of The Winter Solider’s backstory and current mental state but not every viewer is. Why wouldn’t that be the same case within the MCU itself?

As agents of the federal government, characters like Jimmy Woo and Monica Rambeau may have access to privileged information about what really happened when the Avengers succeeded in restoring half the world’s population. Certainly plenty of the surviving Avengers had to be debriefed by SHIELD, SWORD, the FBI, the CIA, or whatever other government agency was around to hear their testimony.

Not everyone else in the Marvel world would be as lucky or as interested. Perhaps someone like Selby cannot be bothered to know whether Bucky Barnes remains a HYDRA asset or not. She’s got an underworld criminal empire to look after. And imagine what it would be like to be one of the 3.5 billion people in the Marvel universe who sprang back into existence after five years. The Falcon? The Winter Soldier? Zemo? Buddy, I’ve got to figure out what my tax situation is like right now.

The Falcon and The Winter Soldier has three more episodes to go. That’s more than enough time for the normies of the Marvel universe to learn the ins and outs of Sam Wilson and Bucky Barnes. And if they don’t? Well, that’s ok too. Superheroes aren’t for everyone. Even for the people who live in the world surrounded by them.