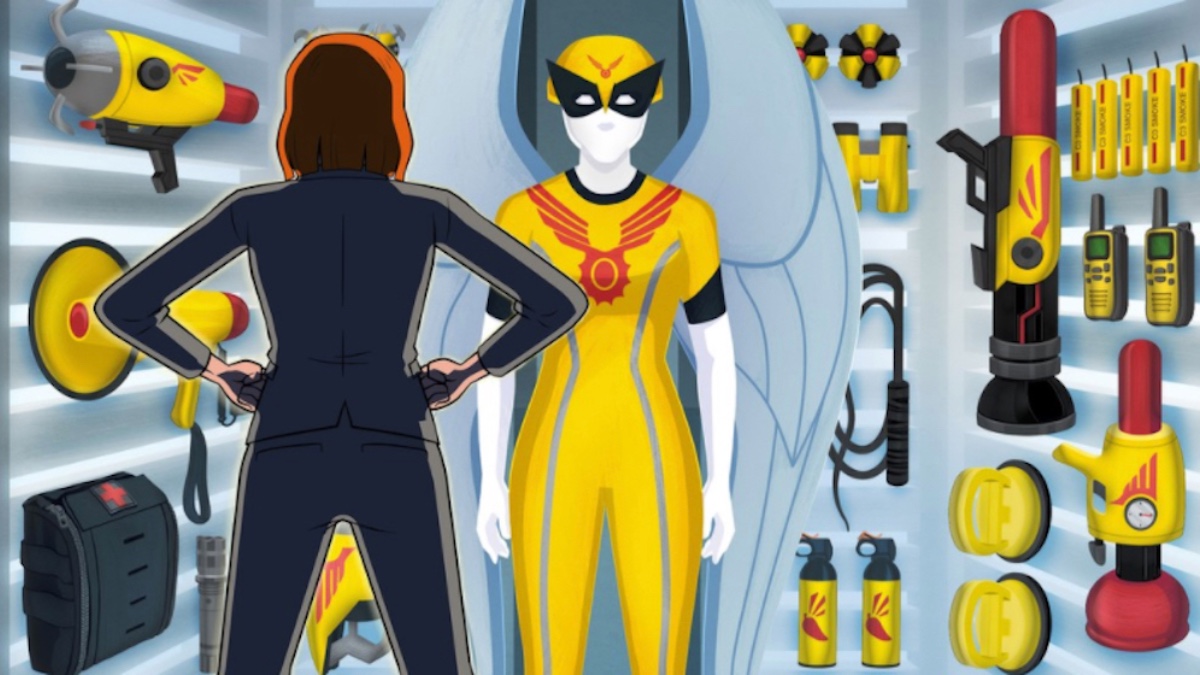 This article contains no spoilers and is based on the first two episodes of Birdgirl.

Harvey Birdman, Attorney at Law was one of the five original series to debut back on Adult Swim when the programming block was first created. The network has evolved in considerable ways since its inception, but even back then Harvey Birdman, Attorney at Law was an important series that helped establish the acerbic and dadaist style of humor that continues to define Adult Swim to this day.

Now, 20 years after the premiere of Harvey Birdman, Attorney at Law and Adult Swim as a whole, Birdgirl returns to this beloved universe, appropriately enough as Adult Swim heads into a new phase. Birdgirl is a delight that’s a worthy successor to one of Adult Swim’s flagship programs, but it’s also its own entity that has something very different to say about bureaucratic superheroes in bird costumes.

One of the smartest things that Birdgirl does is embrace a self-aware attitude where it’s able to have a conversation about the legacy of these Harvey Birdman characters while also commenting upon the legacy of superhero stories. In doing so, Birdgirl becomes a show that’s about honoring the past and using it to establish a unique identity that has a viable future. Judy Ken Sebben’s Birdgirl was easily one of the most chaotic characters in Harvey Birdman and there’s an understandable concern around a series that revolves around her when the universe already has a breakneck pace behind its jokes. Birdgirl is aware that too much Birdgirl can be a bad thing and devises a clever way to remedy this that doesn’t cripple Birdgirl’s character.

Harvey Birdman can get ridiculous and impulsive, but he typically functions as the straight man of his series. Birdgirl is the wild card of whatever room she’s in and she’s given a more grounded supporting cast to balance out her mania, whereas Birdman often needs to make sense of the exaggerated personalities in his inner circle. There’s a subtle, yet perfect, touch during the Birdgirl theme song where the bass line is just Judy’s nonstop interior monologue of doubt. Even the series’ theme is a place where Judy’s insecurities mix together with Birdgirl’s brash confidence.

These supporting characters that compose Judy’s “Birdteam” are all entertaining simply because they all are such contrasts from Birdgirl. The weirdest characters of the lot are Dog With Bucket Hat, who is not Droopy but brings the Hanna-Barbera character to mind, and Meredith the Mind Taker. It’s nice to see that Birdgirl doesn’t fill itself with needless vestiges of the past. It’d be very easy to make Peter Potamus or Peanut some carryover cast member from the old guard, but instead Birdgirl confidently moves forward. Meredith even functions as an example of how to take a concept from Harvey Birdman and update it in a more modern way. Birdgirl also allows its supporting cast to take the lead at times, whereas Harvey Birdman still usually had to have Harvey at the center of everything or at least provide an excuse around his absence and why someone else needs to step in.

This direction is ultimately positive for Birdgirl, but fans of the original may lament the utter lack of Hanna-Barbera connections when that’s what makes Harvey Birdman such a clever series in the first place. It serves as a brilliant deconstruction of both vintage Hanna-Barbera cartoons as well as washed up superheroes. That angle is admittedly less original now, but it still has a stronger hook than Birdgirl, which focuses purely on the dichotomy between the two sides of Judy’s life, almost in a Jekyll/Hyde sense. That’s considerably different to the original Harvey Birdman, Attorney at Law, so I can understand the appeal of this angle rather than Birdgirl just retreading the former series’ greatest hits.

Harvey Birdman: Attorney General is an excellent special that doesn’t rely on a cavalcade of Hanna-Barbera references and does establish a new direction for the property that works and shows that this is possible. It’s just unfortunate timing that Birdgirl arrives at a moment where the market is utterly drowning in superhero content and it’s now difficult to find a point of view that still feels fresh.

This does make Birdgirl feel slightly more disposable, rather than an aggressive successor to one of Adult Swim’s original flagship programs, but it’s still overflowing with strong, strange jokes. Birdgirl’s initial premise may cause eyes to roll in a way that Harvey Birdman didn’t, but there’s at least a solid foundation underneath it all that makes sure that these episodes are always entertaining. There’s a greater focus on character that helps Birdgirl connect on an emotional level and not just function as a joke machine.

The pacing and energy to Birdgirl’s comedy is just as chaotic as it was in Harvey Birdman. Most jokes operate with a Rube Goldbergian sensibility where each gag triggers subsequent punchlines at the perfect moments. Characters from different scenes finish each other’s thoughts and comedy builds through the connected visual gags that fill out the background. There’s such a meticulous nature to the progression of each joke and the gags are allowed to drive the storytelling forward. Scenes in Harvey Birdman can almost feel overwhelming due to how much is going on and how the show can cram a half hour’s worth of comedy into 11 minutes. That’s harder to not just sustain for a half-hour program, but also to tolerate. Birdgirl reaches the right tempo where episodes are packed with gags, but it never feels like it’s too much to process.

Another surprising turn for Birdgirl is that the series briefly gets into the superhero’s origins and why Judy first adopted this alternate personality. It’s quite a sweet backstory that adds legitimate depth to someone who’s always been a caricature of a figure in the past. Harvey Birdman, Attorney at Law posits that Birdman’s law career is his twilight chapter after his retirement as a superhero. Space Ghost Coast to Coast operates off of the same general premise. Heroics remain a major part of Judy Ken Sebben’s life and so Birdgirl forces her to juggle these two very different lifestyles.

The reflexive twist to all of this is that Judy isn’t a normal person who dreams about being a superhero. Birdgirl is a superhero who longs to be taken seriously as a CEO figure. Her life has no lack of danger, but what she can benefit from is a gamma ray blast of responsibility. Birdgirl broaches the idea that Judy can only save one person at a time as a superhero, but as a corporate CEO she’s able to technically help millions at once. It’s a realization that’s said somewhat glibly, but it does feel integral to the core message of Birdgirl.

The superhero nature of Birdgirl is never fully removed from the series and it typically finds a way to naturally connect with Judy’s office affairs. Judy’s Birdteam typically unite to resolve whatever radical madness is at hand, but they still function more like office workers than Avengers. This does help give Birdgirl a certain level of freedom that Harvey Birdman can sometimes lack.

Birdman is far from predictable, but the courtroom structure largely defines nearly every episode. There’s a wider variety of material for Birdgirl to tackle as Judy deals with assistant woes, company secrets, corporate espionage, or even broader problems like the literal headquarters of Sebben & Sebben gaining sentience and developing a desire to murder Judy. The office backdrop turns out to not be a restrictive environment for Birdgirl since Sebben & Sebben is responsible for an infinite melange of products.

Birdgirl is an exciting new Adult Swim venture that’s able to successfully carry on the unhinged atmosphere of the original Harvey Birdman while it takes the material to entirely different places. There may be less cache to Birdgirl since it’s not steeped in references to classic cartoons, but the work that it does to make Birdgirl and company new classic characters is an acceptable trade. Harvey Birdman grows better each season and gains a better grasp on how to tell its stories. There’s a lot of potential in Birdgirl and hopefully it gets the same opportunity to grow and help anchor the network’s next wave of programming.