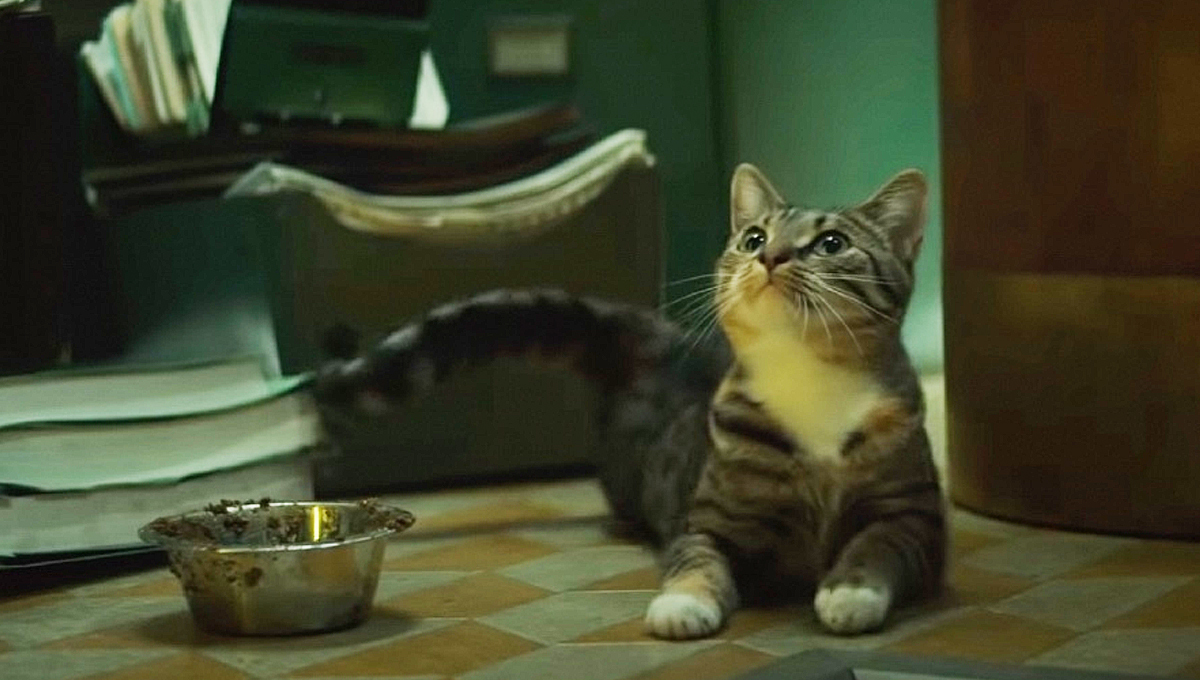 The breakout star of the latest Loki trailer is not the mustachioed Owen Wilson as Mr. Mobius, nor Tom Hiddleston as Loki himself. Nay, the biggest star is, as it always should be, a cat.

The little guy appears around the 35-second mark and he immediately joins the canon of Marvel’s greatest characters. Does he have a name? Not yet. Does he have a purpose? Unclear. Is he a cutie? You better believe it, bud.

The Marvel Cinematic Universe has always operated under the mantra of giving people what they want. For the first decade of its existence that meant introducing dozens of iconic Marvel comic characters and having them crossover in one another’s movies, creating an exciting and comprehensive cinematic universe.

Of late, however, Marvel appears to have realized that an action-packed canon isn’t the only thing film-goers and TV-watchers desire. They also want some nice animals. The feline-appearing flerken Goose delighted Nick Fury and audiences alike in 2019’s Captain Marvel. Two years before that, the giant bulldog Lockjaw was the most beloved (and perhaps only tolerable) part of Marvel TV venture Inhumans.

Now, as Marvel transitions the proper MCU onto TV with its spate of Disney+ series, ultra pettable cats and dogs remain a big part of the franchise’s plan for worldwide dominance. In addition to Loki’s whiskery little guy, this Fall’s Hawkeye is set to introduce the beloved Pizza Dog. By bringing notable cats and dogs into its canon, Marvel is embracing a war older than the Eternals. Forget the Sokovia Accords and Civil War, what side of the line does each major Marvel character stand on? Cats or dogs.

Well, since the Loki trailer offers up a good excuse to think about such a silly hypothetical (and because it’s still an excruciating two months before the show premieres), let’s figure out the dog people and cat people of the MCU.

Loki
Cat Person – Loki does not seem particularly interested in the cat at the Time Variance Authority office. Paradoxically that makes him even more of a cat person.

Tony Stark
Cat Person – Stephen Strange once fairly commented that Tony likes to be surrounded by people who work for him. He would therefore find the loyalty dogs appealing but ultimately pooches are too messy for his workshop. Plus, the allure of speaking down to a cat and receiving a blank response is a strong one.

Bruce Banner
Dog Person – This is tough as Banner in the earlier MCU installments would steer clear of dogs. They’re simply too excitable and he can’t risk raising his heartrate to dangerous Hulk levels. The self-actualized, in-control version of Banner from Avengers: Endgame, however, would finally embrace his Dog Person potential.

Thor
Cat Person – Given Thor’s bubbly personality, one might think dogs would be a better fit. But we know that Thor loves snakes and that seems like a very cat person trait.

Natasha Romanoff
Cat Person – Black Widow is absolutely into black cats. Natasha even has a little buddy named Liho in the comics.

Nick Fury
Cat Person – Sure, a flerken cost Nick Fury his eye but I’m sure he’d still give up his other one to pet Goose again.

Sam Wilson and Bucky Barnes
Dog People – As longtime followers of Steve Rogers, Sam and Bucky can’t help but identify with loyal hounds…even if Bucky has a cat named Alpine in the comics.

The Vision
Dog Person – The Vision is highly interested in humanity and what makes us tick. And I’d like to think as a species we’re more akin to happy-go-lucky dogs than aloof and mysterious cats.

Peter Parker
Dog Person – While Tom Holland’s Spider-Man hasn’t interacted with many animals yet, it’s only a matter of time before the MCU gets its Sandwich.

Scott Lang
Dog Person – Paul Rudd is nothing if not an excitable pup. Plus, cats would certainly pose a bigger threat to Ant-Man.

Peter Quill
Dog Person – Peter is obviously a dog person. Drax, Groot, Gamora, Rocket, and Mantis are exempt from participating in this exercise because the question could be offensive to Rocket there’s a chance they all might one day consider Cosmo the Spacedog a peer.

Doctor Strange
Dog Person – The Stephen Strange of Marvel comics has a doggie familiar named Bats. It seems as though Benedict Cumberbatch would have decent chemistry with a basset hound as well.

Thanos
Cat Person – Cats are perfectly balanced, as all things should be.