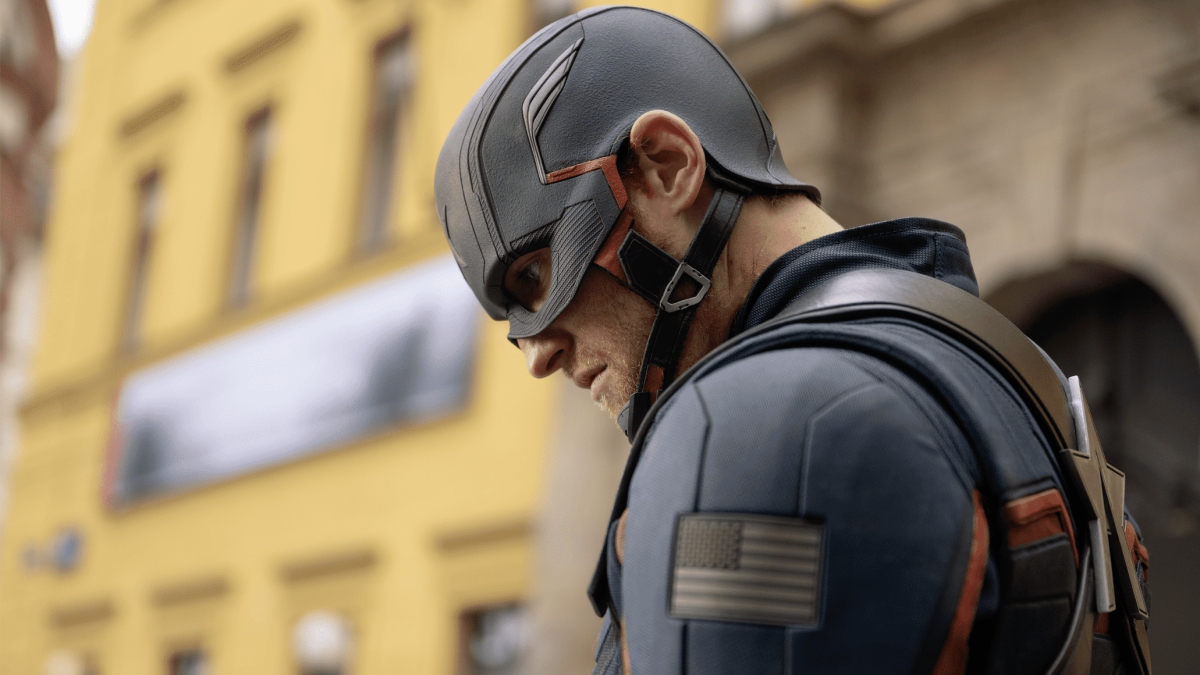 This The Falcon and the Winter Soldier review contains spoilers.

The Falcon and the Winter Soldier Episode 4

The first three episodes of The Falcon and the Winter Soldier were all about world-building. The first episode was about what our titular heroes were up to in a post-Blip world. The second episode focused on the new Captain America John Walker. The third episode was a Captain America: Civil War throwback by revisiting Baron Zemo and Sharon Carter. All the while, we’d check in on the Flag-Smashers and get an increased idea of what they’re about while there’s something in there about a mysterious evil threat in the background, ready to make a play. Oh, and there’s a pissed-off Wakandan bodyguard mixed in there.

The Falcon and the Winter Soldier episode 4, “The Whole World is Watching,” isn’t about introducing new characters or concepts. It’s not about visiting new cities or countries that have specific ties to Marvel lore. It’s about cooking with the ingredients we’re given and seeing what kind of stew we get. This does mean that we get an episode that’s less-than-thrilling and even spins its wheels for a bit, but that doesn’t mean that nothing of note happens.

The first half of the episode is about reaching the boiling point between three main parties existing around our heroes. Three volatile parties that the show has gone to great lengths to portray as sympathetic and likeable at times, only to remind us that they aren’t as pure as they’d like us to believe.

In one corner, you have the accomplished soldier taking Captain America’s place, who wants to do right by his country, but his shortcomings are starting to build within and it’s affecting his attitude. You have the group of revolutionaries whose ultimate goals are noble, but their leader is starting to go off the rails by slipping into mass murder, understandable as some of her actions may be. Then there’s the cool and overly-competent escaped convict/dancing machine, who has proven his worth to our heroes, but is also a bit of a loose cannon and also murdered a country’s king years ago.

Sam Wilson has been able to see eye-to-eye with Walker and Zemo at times. He believes he can see eye-to-eye with Karli if given the chance. Unfortunately, this strength means nothing when those three are in the same vicinity as it is in their natures to oppose each other.

After seeing Sam being little more than a tag-along in the previous episode, it’s nice to see him step up here, less as an action hero for most of the episode, but more as someone with empathy for his foes looking for solutions that don’t necessarily need superheroic action. Sure, he’s more than capable of throwing down with super soldiers, but he doesn’t want to. He wants to help people with their trauma and make the world a better place through that. If he could have it his way, he’d convince Karli her way was wrong, Zemo would go back into custody, and John Walker would go back on his way to wielding the shield without Sam having to deal with him regularly. It’s what he wants, but it isn’t what he’s going to get.

The real person of interest this time around is John Walker. Zemo’s story is simple in that he’s a manipulator who is able to take control of any situation. Karli is someone who feels she’s doing the right thing, but keeps feeling that her back is to the wall. Walker acts like he’s in Karli’s shoes, but its more of a mix of selfishness and humiliation. Walker went into this story thinking he was the second coming of Rogers, but now he’s taken a few shots to the face and no longer knows what he is.

There’s a quiet moment with Walker talking to Battlestar that really waves the red flag about the choice of having him wield the shield. The second episode talked up his war medals and how empowering they are, but are they really? War is hell and to gather so many of those medals means Walker has gathered his share of scars and not all of them are on his skin. These feathers in his cap also qualify as baggage.

If I could compare Captain America to Spider-Man, then Nuke (AKA Will Simpson in Jessica Jones) would be his Carnage. He’s the out-of-control version that twists the original into a psychotic nightmare. John Walker ends up being Venom in that scenario. He stands somewhere in-between heroic and monstrous. The real drama is finding out just where on the map he lands in this continuity, especially when the chaos gets heightened. Soon a development happens that is both predictable and won’t do anyone any good in the long run.

Actually, in my vagueness, I realize there are two developments I can be describing there.

Bucky seems to be taking the backseat this time around, but we do get a flashback early on to his days in Wakanda where Sebastian Stan sells the hell out of the character’s emotions. Fantastic stuff, though while I understand the use of it here to tie into Ayo’s sudden appearance, it felt like it would have been more at home in the previous episode.

While not the most must-see episode of the show, it’s a good cog in the storyline and I’m excited to see what’s next. If anything, the cliffhanger for this episode blows the other three episodes out of the water, and that image of Walker wielding a bloody shield (a grisly counterpoint to the usually bloodless violence of the MCU) while bystanders look on in horror is a haunting one.