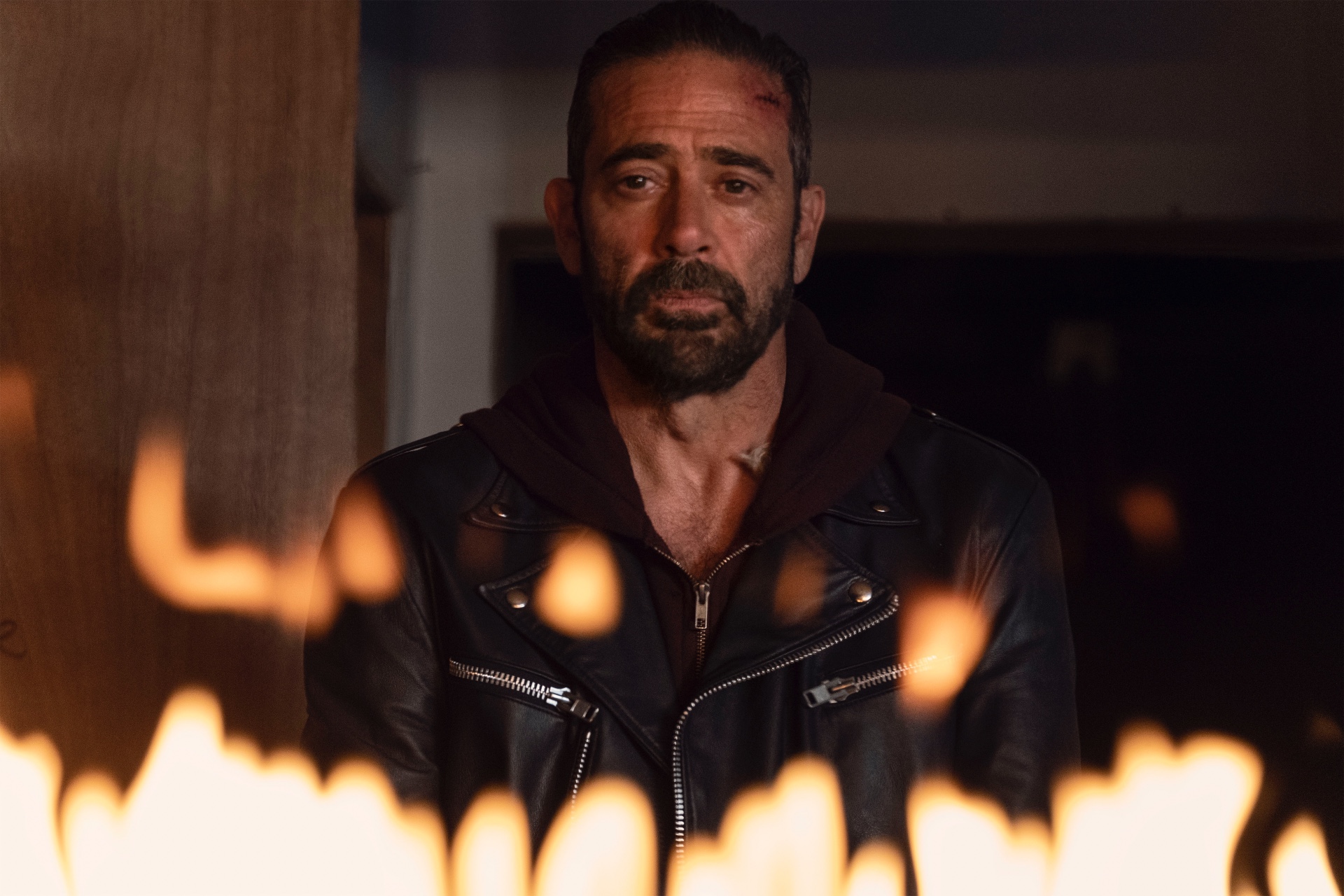 Those were the final words written by The Walking Dead creator Robert Kirkman in a letter following the conclusion of the comic’s 193rd and final issue. It was a cheeky missive to fans clamoring for confirmation that their favorite character made it through the series unscathed. It was also an acknowledgement from Kirkman that, try as he might, he just can’t seem to quit The Walking Dead’s big bad.

Negan could have died at the conclusion of the comic’s major “All Out War” arc, but he didn’t. Kirkman then had him lined up to be shot and killed by Maggie in Issue 174, but illustrator Charlie Adlard talked him out of it. The comic’s final issue could have mentioned that Negan died peacefully in an idyllic cabin “offscreen.” But instead a grown up Carl Grimes acknowledges that someone must be taking all those supplies he’s been leaving.

Kirkman was never able to close the book on one of his most beloved (and also hated) creations, because the storytelling possibilities he presents are endless. Sure enough, when the COVID-19 pandemic hit and the writer wanted to craft a comic book store exclusive to help boost the industry’s flagging sales, it was Negan he turned to once again with the one-off special issue fittingly titled “Negan Lives.”

Now The Walking Dead TV show is facing the same conundrum that Kirkman once did. The character, as played by Jeffrey Dean Morgan for more than four seasons, has seemingly run his course. He was defeated, then rehabilitated, and then finally cast out of Alexandrian society (before making his return once again, of course). With The Walking Dead set to conclude after its 11th season, AMC’s attention has turned to all the various spinoffs that can be mined from it. And doesn’t the crude, charismatic bat-swinger just seem like a great choice?

According to the actor who plays him, everyone seems to be in agreement that he is in fact a great spinoff choice. When Morgan stopped by the Conan talk show, he revealed that discussions are underway surrounding a Negan spinoff.

“It’s definitely being talked about,” Morgan told Conan O’Brien. “I think they’re thinking of a couple different ideas, but I’ve definitely had conversations about possibly continuing the story of Negan. You know, we just did the ‘Here’s Negan’ story, which is sort of the prequel [of] how Negan became this guy, and I shot that with my wife which was so cool.”

“Here’s Negan” was indeed very cool. But was it enough to launch Negan into a whole new round of televised storytelling? We shall see. For now, it’s worth examining what some potential Negan spinoffs could look like, using both the show and the comic as our guides.

Following the events of The Whisperer War, in which Negan helped defeat Beta and fend off Alpha’s horde, the one-time Savior’s story essentially goes into hibernation. Just like in the show, the comic characters elect to give Negan his freedom as a reward for his help, but also banish him from Alexandria as punishment.

Unlike the show version of Negan, however, the comic version pretty much accepts his fate. He doesn’t return to Alexandria but some Alexandrians do come out to find him: namely Maggie, who still wants to see Negan properly punished for killing Glenn. As Maggie’s newest beau Dante (who is nothing like his now-dead TV iteration) tracks Negan down, it appears as though he’s slipping into old habits. He discovers a baseball bat in a barn and wraps barbed wire around it, creating “Lucille 2.”

When Maggie and Dante confront him though, Negan immediately gives up on regaining any of his old swagger. He reveals that he’s tired, in pain, and lonely. Maggie killing him would be a mercy. So Maggie elects not to be merciful and leaves him alive. Negan is never seen again in the main comic run. It’s not until the comic’s final issue that we even get confirmation he’s still alive. Carl Grimes drops off some supplies at a house that has a “Lucille” headstone in front of it.

This latter day version of Negan isn’t really well-suited for the action-packed nature that a Walking Dead spinoff would want to depict. But that doesn’t mean that the show can’t draw some inspiration from his big attitude change as it puts him in more dynamic situations. “Here’s Negan” went a long way towards building sympathy for the character. Negan will have to maintain at least a bit of his woeful weepiness in any spinoff to stay sympathetic.

The aforementioned Negan Lives comic is 36 pages and is designed to fill in the gaps between the events of Issue 174 and the final image of Negan retired to a life of quiet contemplation.

Admittedly, not much happens in this spinoff either. While in exile, Negan meets a beautiful young woman named “Lucy” and after his initial shock wears off, he correctly deduces that she’s a honeypot for some bad dudes to come and kill him. Those bad dudes are named Derrick and Barry and they want to kill Negan because…well, it’s not entirely clear why. Maybe his living environment is highly desirable and they want to take it.

In any case, after being forced to dig his own grave, Negan is saved by some Deus Ex Zombie and kills Derrick by plunging a shovel into his chest. While doing so, he expresses extreme disappointment in the fact that the duo didn’t just kill him from the outset. Negan is one of the very few people in The Walking Dead universe who fully appreciates just how dangerous Negan is. It’s baffling to him why people don’t kill him when they get the chance.

Once the deed is done, Negan invites Lucy to join him on one final mission. He’s going to return to the hospital where he left Lucille’s body and give her a proper burial. Maybe then he can find some peace.

Even though there isn’t much action in “Negan Lives” to inspire an entire Negan TV spinoff, it does present another important bit of the character’s evolution. It reveals how Negan can be chastened and sad, while also still being his old vulgar self…and a highly competent killer to boot.

With a lack of good storytelling options from the remainder of the comic run, it’s clear that any Negan spinoff is going to have to rely on original material. Should that be the case then we have but one word of advice to the Walking Dead decision-makers.

It was legitimately exciting when Morgan was cast as one of The Walking Dead’s most iconic characters since the actor has a long track record of charming audiences. Morgan was excellent as one of the first big guest stars in Grey’s Anatomy. He was supremely likeable as the father of the Winchester boys on Supernatural. He was even pretty compelling in his limited time as The Comedian in Watchmen.

In the early seasons of his performance as Negan on The Walking Dead, however, it was clear that something was a bit off. The actor’s rugged appearance didn’t translate perfectly to Negan’s clean-shaven militaristic look. The rapid string of profanities that worked so well on the page didn’t seem quite right coming out of Morgan’s mouth. And then there was the “lean”, oh that silly Negan lean.

“Here’s Negan” was one of the best episodes of The Walking Dead ever, and a bold reset for both Negan. Morgan was able to find the dramatic core of the character by tuning down much of his more cartoonish elements. Some of that comic charm is welcome to join Negan in any hypothetical spinoff, but Morgan needs to be empowered to continue to portray a more grounded version of the character to really make this work.