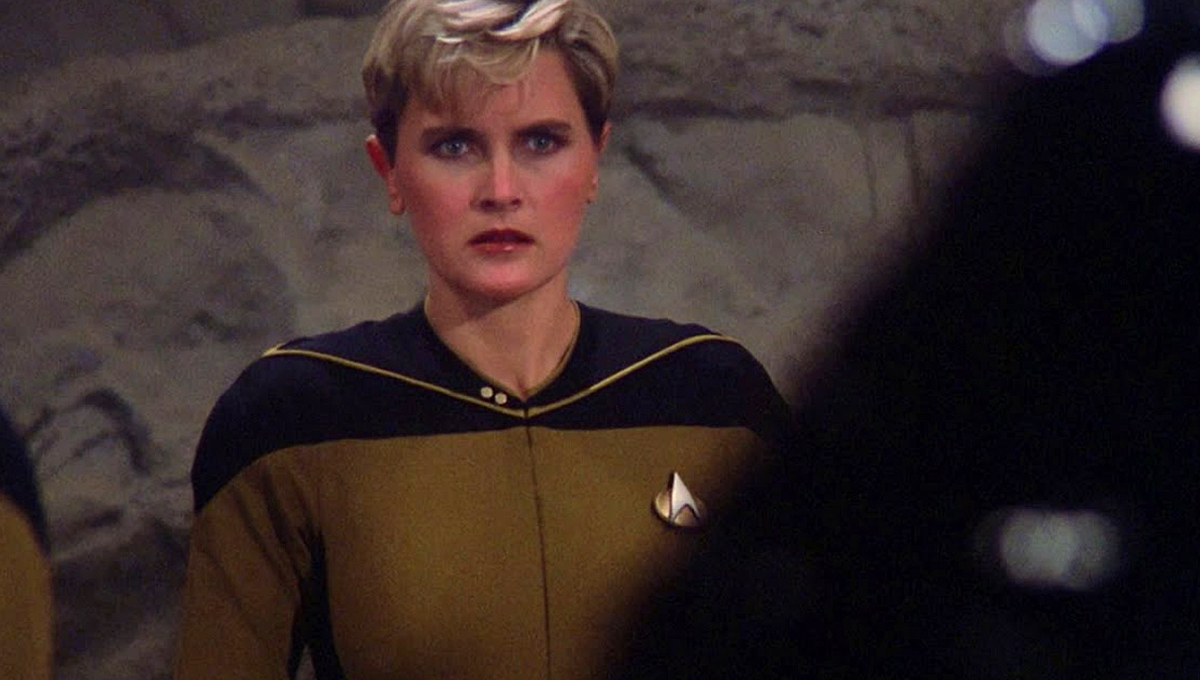 “[I] died a senseless death in the other timeline. I didn’t like the sound of that, Captain. I’ve always known the risks that come with a Starfleet uniform. If I am to die in one, I’d like my death to count for something.”

Denise Crosby’s Lt. Tasha Yar, Star Trek: The Next Generation’s inaugural chief of security, managed—due to some alternate timeline trickery—to take that legendary meta-minded dig at her own death from two years earlier in the Season 1 episode, “Skin of Evil.” With that episode having originally aired on April 25, 1988, the anniversary is a good occasion to look back on the controversial behind-the-scenes circumstances that resulted in poor Tasha’s unspectacular, abrupt, red-shirt-like fatal encounter with an alien tar monster on a cheap-looking set.

“Skin of Evil” was the 22nd episode of Star Trek: The Next Generation’s inauspicious inaugural season—just three episodes away from the season finale. Consequently, with audiences at this point having stuck with the show for seven months since its September 26 premiere, the death of a main cast member certainly felt like a stakes-redefining kick against procedural complacency. However, those who had been following industry trades, and read the then-fresh, spoiler-teasing cover story exposé in Starlog magazine, titled “The Security Chief Who Got Away,” pretty much already knew that Crosby was on the outs with the series. Thus, the prevalent question going into Season 1’s final few episodes was not if Tasha Yar was leaving the Enterprise D, but how. Well, said how would prove to be one of the most controversial, lamentable moments in Star Trek history.

Crosby denied the growing rumors of her impending exit during contemporaneous interviews published before “Skin of Evil” aired, but she had indeed quit the series, mostly due to the lack of character development given to Tasha Yar. While she was given a backstory of a rough upbringing on the lawless abandoned Earth colony, Turkana IV, Yar’s only real moment in the spotlight (besides her famous seduction of android Data in “The Naked Now” while under alien viral influence,) had been Episode 3, “Code of Honor,” in which she became the amorous focus of an authoritarian alien leader, and would be forced to participate in a campy fight to the death with the leader’s outraged first wife. Thus, dealing with the show’s notoriously demanding schedule, and faced with the believed prospect of spending years soullessly saying “hailing frequencies open,” Crosby put in a request to be released from her contract, which creator Gene Roddenberry granted.

Unfortunately for Tasha Yar, Roddenberry’s acquiescence would come with a shocking caveat: a sudden and underwhelming onscreen death. “Skin of Evil,” directed by Joseph Scanlan, written by Joseph Stefano and Hannah Louise Shearer, set things up with a rescue mission after an Enterprise shuttlecraft containing Counselor Deanna Troi and pilot Lt. Ben Prieto crashed on the barren planet, Vagra II. Accordingly, Yar joins an away team consisting of Cmdr. William Riker, Lt. Cmdr. Data, Dr. Beverly Crusher to the planet surface, on which they encounter a powerful, tar-like creature that calls itself Armus. There, Yar quickly loses patience as the creature continues to block their rescue effort, and tries to move past it, resulting in an attack that sends her flying backwards, leaving her tar-marked face lifeless on the ground as the essence drains from her body; a condition even beyond the help of subsequent emergency efforts back on the Enterprise. Thus, Yar’s arc, for what it was, had come to an anti-climactic conclusion; a fate attributed to the dangerous nature of Starfleet service, especially for someone in security. However, said fate allegedly wasn’t inspired by any artful motivations.

So, why did Yar’s exit go down this way? Crosby recounted in 1993 behind-the-scenes book, Trek: The Next Generation Crew Book that “Gene [Roddenberry] really felt that the strongest way to go would be to have me killed. That would be so shocking and dramatic that he wanted to go with that.” However, another anecdote-touting tome, 1992’s Trek: The Unauthorized Behind-The-Scenes Story of The Next Generation, alleges that the “Skin of Evil” script—as with other Season 1 episodes—was secretly tweaked and/or rewritten by Roddenberry’s lawyer, Leonard Maizlish, who held an ambiguously-defined full-time staff position on the series. The purported rewrite, which would have been illegal in the Writer’s Guild, was believed to have been designed to deny any dramatic or sentimental value to Crosby’s character. With Roddenberry having recently lost creative control of the Star Trek movie franchise from Paramount Pictures, Maizlish may have been there to protect his bottom line, in this case ensuring that a dead-and-forgotten Tasha would leave no incentive for a potentially-costly new contract for Crosby down the line.

Nevertheless, “Skin of Evil” concluded with an emotional sendoff for Yar, with a memorial service—consisting of only the main cast member characters—set on the holodeck, where the late security chief posthumously delivers well wishes to her colleagues, notably a weeping, possibly guilt-ridden rescuee, Troi (actress Marina Sirtis was reacting to Crosby’s set presence off-camera). Yet, Crosby still had to endure the show’s apparent power plays, even after said memorial, since the show’s out-of-sequence production schedule resulted in her having to shoot one last appearance for her death episode’s immediate predecessor, Episode 21, “Symbiosis,” which also provided another famous Tasha Yar moment, in which she delivers a ham-fisted, Just-Say-No-era anti-drug speech to Wesley Crusher when addressing the episode’s alien drug pushers. It’s a bit of trivia that Crosby famously used in 2019 in a now-famous Twitter dunk on controversial executive producer Rick Berman.

While Crosby’s post-Star Trek aspirations wouldn’t quite pan out the way she had likely envisioned, save for a co-starring role in 1989 movie Pet Sematary, (she’s recently banked an impressive array of TV appearances on shows like The Walking Dead and Ray Donovan,) her apparent status as persona non grata on the Enterprise wouldn’t last long, and she would make a monumental return as Tasha in 1990 Season 3 episode “Yesterday’s Enterprise,” in which a temporal anomaly alters the timeline for the Enterprise D, creating a reality in which the Federation is fighting a war with the Klingon Empire, and an anachronistic Season 3-era Yar is very much alive. Pertinent to the episode’s time-bending meeting with predecessor vessel the Enterprise C, Yar—after learning of her main timeline death from Guinan—would transfer to the embattled historical ship (after the earlier-quoted speech,) to ensure that it fulfills a sacrificial destiny to prevent a war that wasn’t supposed to take place, finally giving meaning to her death.

“Yesterday’s Enterprise” was so well-received that it facilitated more Yar-adjacent material, first with the 1990 Season 4 episode, “Legacy,” in which the Enterprise crew go to Tasha’s home, Turkana IV, and become embroiled in a scheme concocted by her bitter estranged sister, Ishara (Beth Toussaint). However, a prominent Crosby comeback would dominate Seasons 4-5’s two-part cliffhanger storyline, “Redemption,” when she played Commander Sela, the daughter of the “Yesterday’s Enterprise” alt-timeline Tasha Yar and a Romulan general to whom she was forced to become a concubine after the Enterprise C’s war-preventing act. In a twist of fate, Crosby, once an underutilized outcast crew member, had been positioned to play one of the show’s most memorable villains, since Sela is a ruthless, unwaveringly loyal servant of the bellicose Romulan Empire, and displays her own heartlessness when revealing that her mother, alt-Tasha, was killed while trying to escape with her as a child. Additionally, Crosby reprised the role of prime-Tasha in Picard’s Q-conjured pilot-era flashbacks of 1994 two-part series finale “All Good Things.”

Historically, it seems clear that a series of myopic mistakes rendered Denise Crosby’s Star Trek journey more circuitous than necessary. However, the result was a character arc that stands the test of time. Plus, not for nothing, the fantastical nature of current spinoff series Star Trek: Picard could easily facilitate a contemporary Crosby comeback—either as Commander Sela (who eventually became a Romulan empress in the non-canon story of video game Star Trek Online,) or even as alt-Tasha, whose alleged death was never confirmed onscreen. To put it in the parlance of the late security chief, such a comeback would be a jewel for fans.