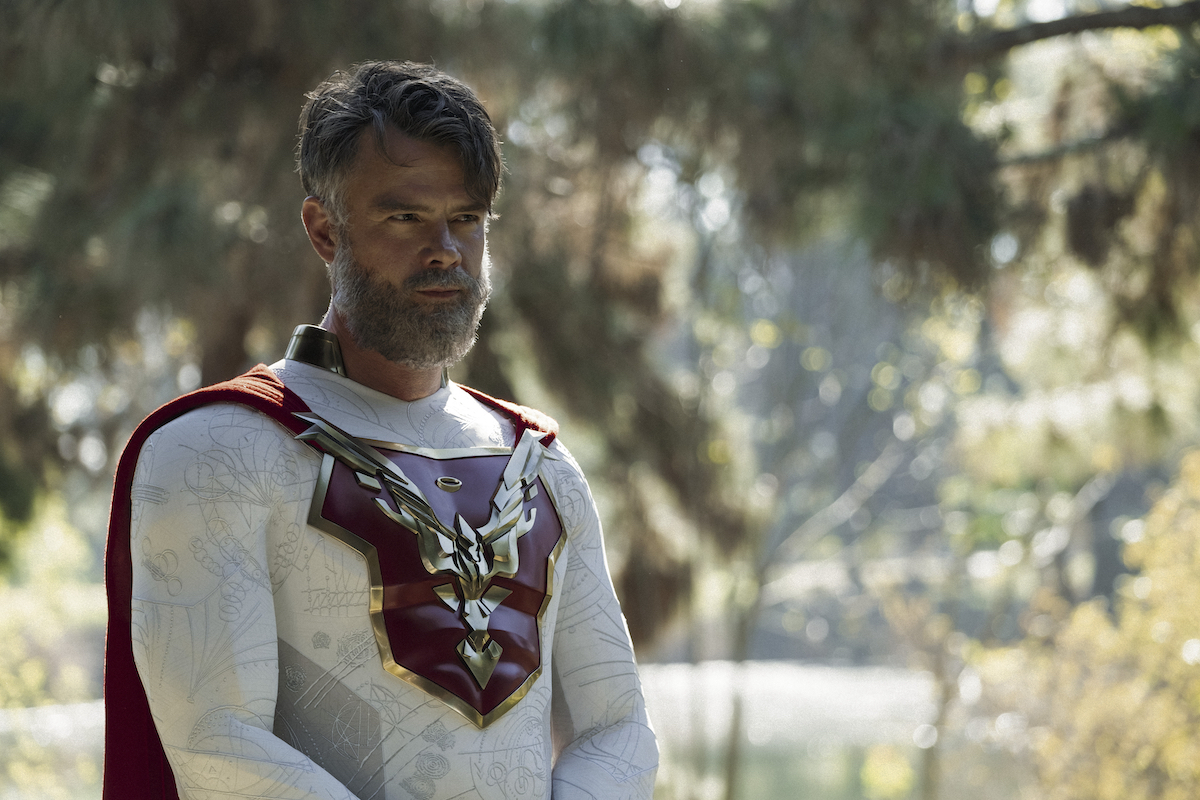 This article is presented by:

Filming epic adventures is certainly nothing new to Josh Duhamel, having starred in four of the Transformers films and the Call of Duty: WWII video game. In between, he’s been a part of 35 films (including voicing Harvey Dent in the forthcoming animated film Batman: The Long Halloween Part One). On television he made his debut as Leo du Pres in the daytime soap All My Children, and guest starred or voiced characters on a variety of series. He was a regular on Las Vegas and Battle Creek.

Now he’s giving the superhero genre a whirl as Sheldon Sampson—The Utopian—on Jupiter’s Legacy. When you check out what he has to say in the following conversation, there seems to be little doubt that at least part of his decision to do so was to impress his seven-year-old son, a massive superhero fan. There are certainly worse motivations than that.

Who is The Utopian?

POWERS AND ABILITIES: Flight; physically the strongest man on the planet; semi-invulnerable; super speed; energy beams from his eyes; telekinesis

NEED TO KNOW: Leader of The Union, Grace’s husband, Brandon and Chloe’s father, Walter’s brother, and the world’s greatest superhero. Sheldon insists all superheroes abide by the code. But times have changed in the last 90 years…

Den of Geek: Have you secretly desired to play a superhero?

Josh Duhamel: Not at all. Honestly, I thought I was too old to do it at this point. Thankfully, the guy that I play is an aging superhero. Plus they can age me down, too. So I go from being in my 30s to the present day, which is about 90 years later.

That’s quite the span.

Yeah, I go from this young man to this grizzled superhero, who’d seen it all and sort of carried the weight of the world on his shoulders for 90 years. And there is a weight to that.

That must take a toll on Sheldon?

There’s a world weariness about the guy that I love, because this code that he’s lived by for so long, and what he believed in, he’s starting to wonder if it’s working. And the younger generation, the public, and even the other original six that he started this thing with are starting to question his leadership.

Was that part of the attraction?

The interrelationships and the dynamics between this family, and how dysfunctional it is in some ways, is what really drew me to it. I loved the idea of a superhero family from a psychological point of view. The superhero stuff is fun, too, don’t get me wrong—I do really enjoy putting that suit on—but at the end of the day I wanted to be part of a really good story. I think that’s what we have.

You gave a sense of where he kind of starts questioning himself and all that, but as a person, how do you view Sheldon?

Well, we’re similar in a lot of ways, but I also wonder what the hell he’s thinking a lot of the time, because I have been accused of being stubborn myself. I have been somebody who believes strongly in what I believe in, and at the same time, I’m able to sort of step back and be like, well, you know what, maybe I should listen to different points of view. That’s really what I’ve prided myself on, especially over the last 10 years or so. I have to be able to not just be a stubborn, egomaniac, I can just actually hear what other people’s thoughts are and what their ideas are, how they see the world from their shoes.

Sheldon for the first time is really having to do that. Because for so long what he said goes; people just idolized this guy for 80 years. He’s the leader of The Union and he’s done that for so long and now is suddenly being questioned and second guessed, it’s probably not an easy thing to go through. But at least he has enough wherewithal, enough self-awareness to sort of look at that.

He’s a guy who is the most powerful dude in the world by all measures, but has no clue how to deal with his 20-year-old daughter. There’s nothing that he can do to sort of sway her. Any father who’s had a daughter from the age of 12 to 20 would probably relate to that.

Was Superman or that kind of character influential on you in playing The Utopian?

One of the first things I ever saw in the theater was Superman II in the early ‘80s. I remember seeing that and going, “Oh my God, this is amazing.” And I’ve always sort of been a fan… it has always been a part of my life.

My son absolutely loves superheroes. Seven years old and he loves drawing and he loves art and he always wants to make superhero costumes. I do think in some ways Superman was an influence, but this show takes a different angle at it. It isn’t so much about saving the world as much as it is about saving his family. Saving what he’s believed in for so long, the ideals that he’s fought so hard for. And that’s where I think the conflict lies in this. Obviously there’s villains to overcome and everything else, but equally it’s about his family and keeping that together.

Is there something empowering about wearing a costume like that?

I’ve got a couple of little anecdotes about that. We shot an additional scene recently and it reminded me of when I first put the suit on back when we first started shooting last year and walked on set. I first walked on set to rehearse without the suit on and nobody looked twice. And then I walked on the set in that suit with that big full mane of hair and the beard and all of that, and everybody kind of moved aside. But it’s easy, because it is a very imposing sort of look that this dude has when I walk out there and it does give you a certain weight and it helps in your acting in a weird way. I look in the mirror and I’m, like, “Holy shit, I look like Jesus or Zeus or something.”

So it was a really interesting feeling to see the imposing look that this thing has. But the interesting thing is that when my son, who I said was a huge superhero fan, when I first had it on, I walked out in front of him, he was like, “Oh my God!” He couldn’t believe it. And what do you think he does? He looks at me, he looks me up and down and goes, “It’s too white.”

At first I was, like, “What are you talking about?” But then I said, “Maybe you’re right.” So I actually told [showrunner] Steven DeKnight what my son had said, and they all started looking at it and they’re, like, “You know what? He might be right,” because it wasn’t broken up enough. So they added a light gray; not much of a difference, but it broke up the white a little bit. These alien emblems and this alphabet and all these weird sort of things from where these suits came from were integrated into the suit and a little more and that broke up the white. And I was like, “Wow, my kid was right.”

Jupiter’s Legacy premieres on Netflix on May 7. Read more about the series in our special edition magazine!