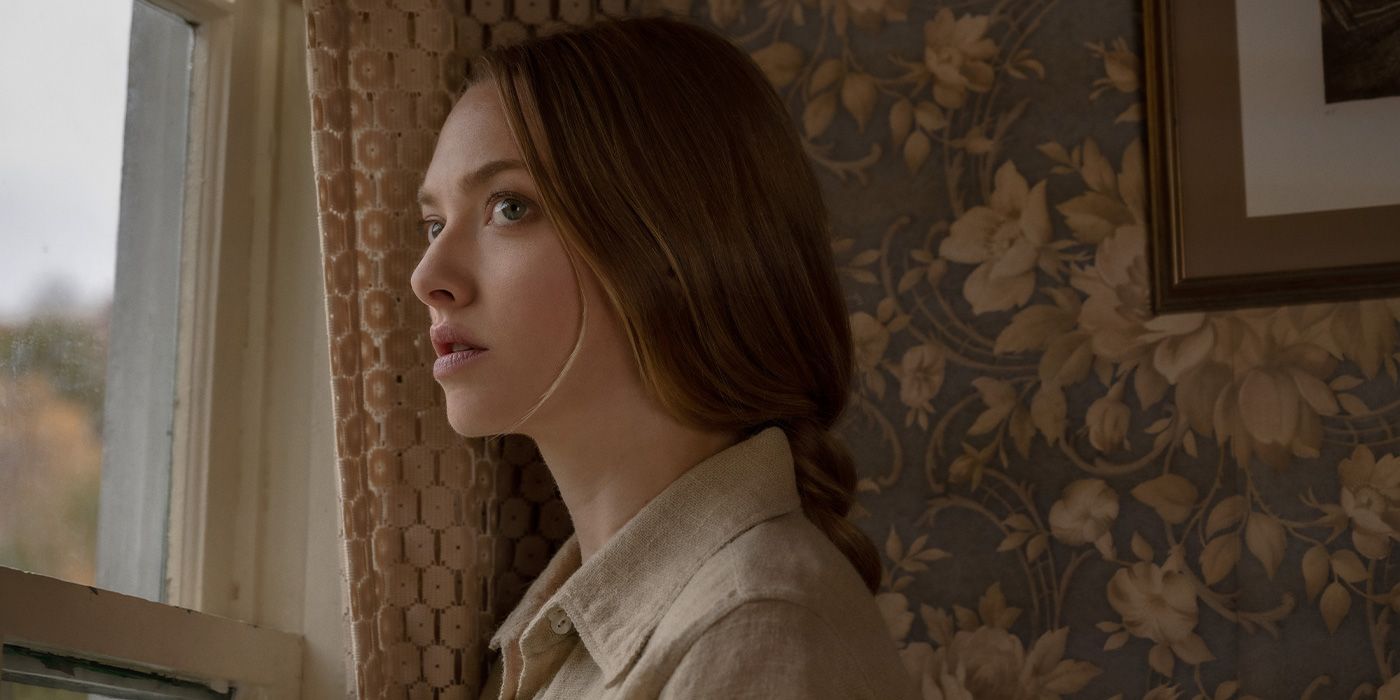 A haunted house, a religious philosophy, and a horrible story of domestic abuse are at the center of this Netflix original horror-thriller, Things Heard & Seen, a movie that plays with big ideas but gets confused along the way.

Amanda Seyfried stars as Catherine, a young art restorer who moves with her lecturer husband George (James Norton) to a small town and a new house when he secures a job at a local college. Isolated from her own work and friends, and now a full time mum to their young daughter Franny, Catherine grows increasingly frustrated while George appears to be thriving, adored by his young students, popular with staff at the small college where he teaches art history, and indulging in extra curricular activities with a local girl (Stranger Things’ Natalia Dyer).

Meanwhile the house they moved into seems to have a personality and history of its own, linked to some former residents. Perhaps items conveniently left behind in the house will hold a clue to what might have occurred? Maybe the local library will also keep records pertaining to the original owners of the house but completely neglect to mention the recent tragedy that occurred there? Or maybe the creepy clown nightlight and the rocking chair that rocks by itself will hold the key?

Part grip-lit crime thriller – the film is based on the 2016 literary whodunnit All Things Cease to Appear by Elizabeth Brundage – and part The Conjuring wannabe, Things Heard & Seen is both massively trope-y and packed with clichés. It’s also so overblown with ideas that it’s slightly pretentious at best, slightly offensive at worst.

The title comes from the seminal work of Swedish theologian and philosopher Emanuel Swedenborg, the full name of which is Heaven and its Wonders and Hell From Things Heard and Seen, which characters vaguely discuss in the movie. In case you don’t have a working knowledge of this 1758 Latin text or the painter George Innes (whose paintings also inspired the source material novel’s original title), the general gist is that they believe that everything in the natural world has a counterpart in the spiritual world, and that death is not the end but a new beginning, in Heaven or in Hell (or somewhere in between). It is not a judgment from God but where a person’s nature will inevitably drive them, and that goodness always triumphs in one world or another.

It’s a sort of pseudo-intellectual slant for a movie which is basically What Lies Beneath, but not as good. Fortunately Seyfried and Norton put in committed and convincing performances – she as the intelligent, stifled wife who fell into marriage and motherhood, he as the entitled sleazebag who would never dream of hurting his wife except when he does. The supporting cast is strong too, including F. Murray Abraham as George’s lovable boss and Rhea Seehorn as Catherine’s newest friend and the only person who sees right through George.

As a portrait of gaslighting and domestic abuse, it’s uncomfortable to watch while extra details like Catherine’s eating disorder, George’s father’s homophobia, and George’s casual art fraud seem like strange and unnecessary add-ons. As the film progresses, it becomes so full of non-sequiturs and random things that are never mentioned again that it veers into unintentionally funny territory.

While last year’s The Invisible Man found a smart way to talk about toxic relationships using the trappings of its genre to great effect, Things Heard & Seen feels confused, implausible, full of threads that go nowhere, and not at all sure of what it wants to be. It’s a shame since writer/director duo Shari Springer Berman, Robert Pulcini did fine work with their fiction feature debut America Splendor.

For those locked in and clawing for something new to watch, Things Heard & Seen is at least intriguing enough to keep you engaged for its two-hour runtime, though the ending might leave you scratching your head. Also the movie isn’t in the slightest bit scary. For those locked in with a partner who is driving them slightly crazy, you might be best off giving it a miss. Hokey nonsense which leaves you with more questions than answers – and we don’t mean the big ‘what happens when you die’ ones – Things Heard & Seen is probably one to ignore and avoid.

Things Heard & Seen is available to stream on Netflix on April 29.