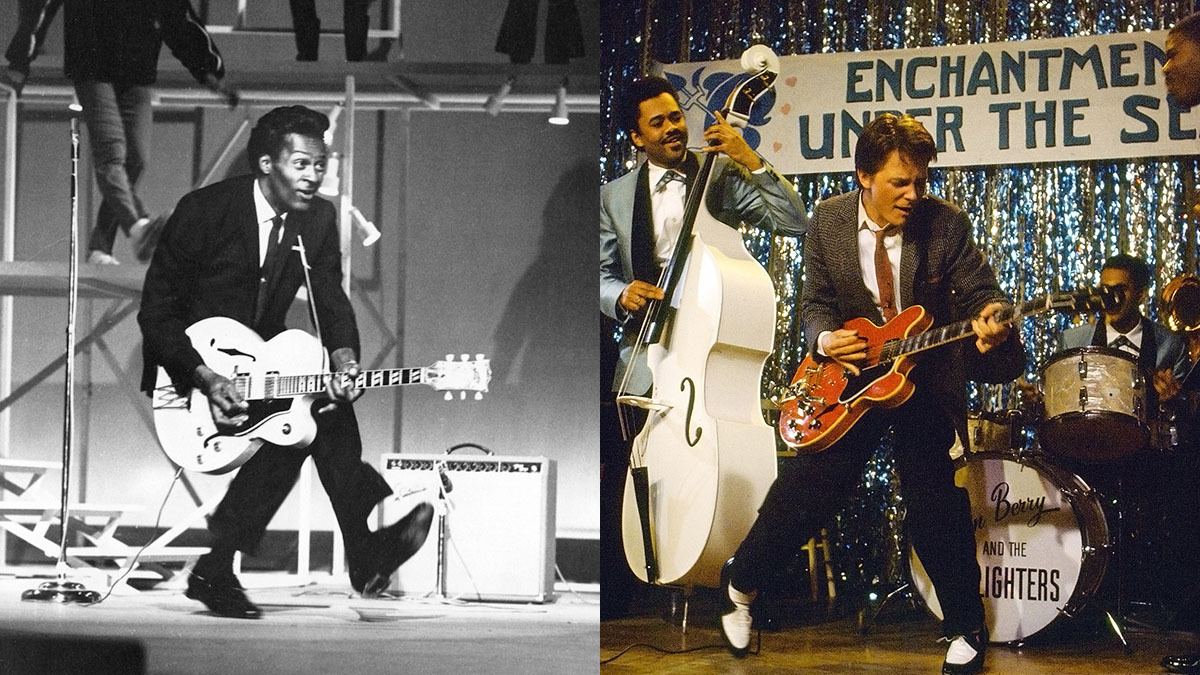 Back to the Future is a classic comedy, one of the most popular films in motion picture history. Almost every laugh line lands with a perfectly executed punch. Every skateboard flip is a motion picture wonder. It’s one of those films which is broadly silly yet still has heart, and it’s a treasure of commercial cinema. But when Michael J. Fox’s Marty McFly straps on a cherry red Gibson ES-345 he plunders the golden oldies right out of the fingers of the true original. Ignore the bit where “Marvin Berry” calls his cousin on the phone. Chuck Berry didn’t just write “Johnny B. Goode,” he was Johnny B. Goode.

The song about the country boy who could play guitar like ringing a bell could have referred to any number of musicians, from Buddy Holly to Bo Diddley or Ricky Nelson. But the singer-songwriting guitarist who penned the line was born at 2520 Goode Avenue, in St. Louis.

Berry had already made his concession to white commercialism by changing the line “that little colored boy could play” to “that little country boy.” Oh my. But then for years, the Father of Rock and Roll watched the self-styled King of Rock and Roll, Elvis Presley, put his stamp on Berry’s signature. The royalties were sweet though for Berry, and the respect was mutual.

But the backhanded homage in the time-traveling 1985 comedy is really a cheap gag, and the joke is at the expense of Berry’s legacy.

“Chuck! Chuck, it’s Marvin, your cousin, Marvin Berry. You know that new sound you’re looking for?” the fictional bandleader yells into a pay phone at the 1955 Enchantment Under the Sea dance in Hill Valley, California. “Listen to this!”

We then hear the subtle sound of casual racial invalidation. Not only does the line denigrate Berry’s contribution to the architecture of rock and roll; it completely sidelines guitarist Carl Hogan who initiated the opening guitar phrasing on Louis Jordan’s 1946 pre-rock and roll song “Ain’t That Just Like a Woman.” Think, McFly. Think!

Michael J. Fox already has a perfectly winning comic ending to the now-iconic scene: when his fingers stretch back to the future, and he channels Eddie Van Halen on the guitar, even the kids at the 1950s dance think he should act his age. So why does director and co-screenwriter Robert Zemeckis feel the need to shit on Chuck Berry with such a disposable throw-away gag? It is even more insulting when you take into consideration who Berry had to sue over the course of his career for stealing his riffs.

Indicative of a long-standing music industry tradition, the two biggest names in white rock and roll, the Beatles and the Beach Boys, had to cough up to the pioneering artist after infringing on his copyrights. Berry sued to get his name on the Beach Boys’ hit “Surfin’ USA” while John Lennon agreed to cover two songs owned by Berry’s publisher in exchange for copping lines from “You Can’t Catch Me” for the song “Come Together.”

But Lennon still declared “If you tried to give rock and roll another name, you might call it ‘Chuck Berry,’” when he introduced him on The Mike Douglas Show in 1972. “In the 1950s, a whole generation worshipped his music, and when you see him today, past and present all come together, and the message is Hail, Hail Rock and Roll.’”

He Could Play a Guitar Just Like a-Ringin’ a Bell

Berry didn’t invent rock and roll. Ike Turner is credited with that for his 1951 song, “Rocket 88.”  Berry recorded his first hit “Maybellene” in 1955 at Chicago’s Chess Studios, the home of the blues. Berry sped up the blues to a country thump and let his fingers do to guitar strings what lips did to horns.

Berry made rock and roll fun, funny, and subtly rebellious. The teenager in “You Can’t Catch Me” is motorvating away from the cops. His “Brown Eyed Handsome Man” hit a home run with color coded racial pride. The artist who was glad, so glad, he was “living in the U.S.A.” (in the song “Back in the U.S.A.”) was barred from many of the things he found so wondrous in this country to sing about.

Charles Edward Anderson Berry was born on Oct. 18, 1926. His St. Louis neighborhood, “The Ville,” was segregated. His great-grandparents were slaves. In 1944, Berry was arrested for driving along in an automobile he carjacked at gunpoint after robbing three stores in Kansas City. He did a three-year stint in reform school.

Berry renamed the song “Maybellene” when he recorded it on May 21, 1955. It was Berry’s first nationwide hit. He was 28. Willie Dixon was on bass, Johnnie Johnson played piano, Jerome Green shook maracas, and Ebby Hardy beat the drums. Alan Freed and Russ Fratto didn’t do anything for the song, but their names are on the credits as co-songwriters. They effectively collected royalties for teaching Berry a valuable lesson.

Chuck Berry wrote all the songs on his first album, After School Session, which was released in May 1957. It was the same for his next two albums. Berry didn’t include any covers on his albums at all until his fourth album, Rockin’ at the Hops, released in July 1960. Berry starred in some of Alan Freed’s jukebox movies like Rock Rock Rock!, Mister Rock and Roll, and Go, Johnny, Go! He also appeared in Jazz on a Summer’s Day, a 1959 documentary about the Newport Jazz Festival.

“No Need to Be Complainin’, My Objections Overruled”

Berry was arrested in St. Louis, Missouri, in December 1959 for transporting Janice Norine Escalan, a 14-year-old hatcheck girl at Club Bandstand in Juarez, Mexico, across state lines for “immoral purposes.”  He was charged under the Mann Act. Berry argued he was offering legitimate employment. An all-male, all-white jury found him guilty on March 11, 1960. Berry appealed, but the conviction was upheld at a 1961 trial. Berry was sentenced to three years. He served 18 months and was released from prison in 1964.

Berry’s career never quite took off again. He had some hits in 1964 and 1965, “Nadine,” “No Particular Place to Go,” “You Never Can Tell,” and “Promised Land.” He was one of the artists in the 1964 concert film The TAMI Show. Berry’s last number 1 hit, “My Ding-a-Ling,” was recorded live in London in 1972 for The London Chuck Berry Sessions album.

Berry never stopped playing live. He traveled with only his guitar and a briefcase for his money, and would grab local bar bands to back him when he hit town. Everyone knew Chuck Berry songs. Simple, three-chord pangs to teenage love, cars and safety belts. Bandleaders like Bruce Springsteen and Steve Miller eagerly lent their fingers and bands to the light traveling guitar player. Most groups were thrilled to get the chance to play for a legend when they weren’t harangued for bending a string too far on an intro. Not even Keith Richards got away with that, just watch the rehearsal portion of the 1987 documentary Hail! Rock ‘n’ Roll.

The Rolling Stones’ guitarist had already been brought in as a surprise backing player for a 1972 Los Angeles show where he was kicked off the stage for setting his amp too loud. Berry would also give Richards a black eye for touching his guitar after a New York City show a decade later. Richards’ early guitar work is modeled on Berry’s style. The Stones covered “Carol,” “Around and Around” and “You Can’t Catch Me.” Richards inducted Berry into the Rock and Roll Hall of Fame in 1986.

Back to the Future is really just a light, inoffensive, time-bending screwball comedy, and Berry has been the butt of far worse jokes. Spy magazine alleged Berry secretly filmed women in bathrooms. In January 1990, High Society claimed to be “the only magazine with the balls to show Chuck’s berries,” when it published photos of him posing nude with different women.

So when you read an article about Berry recalling the incident where the white kid played “Johnny B. Goode,” remember: it ran in The Onion. Chuck Berry could be accused of a lot of things, but he was an original.