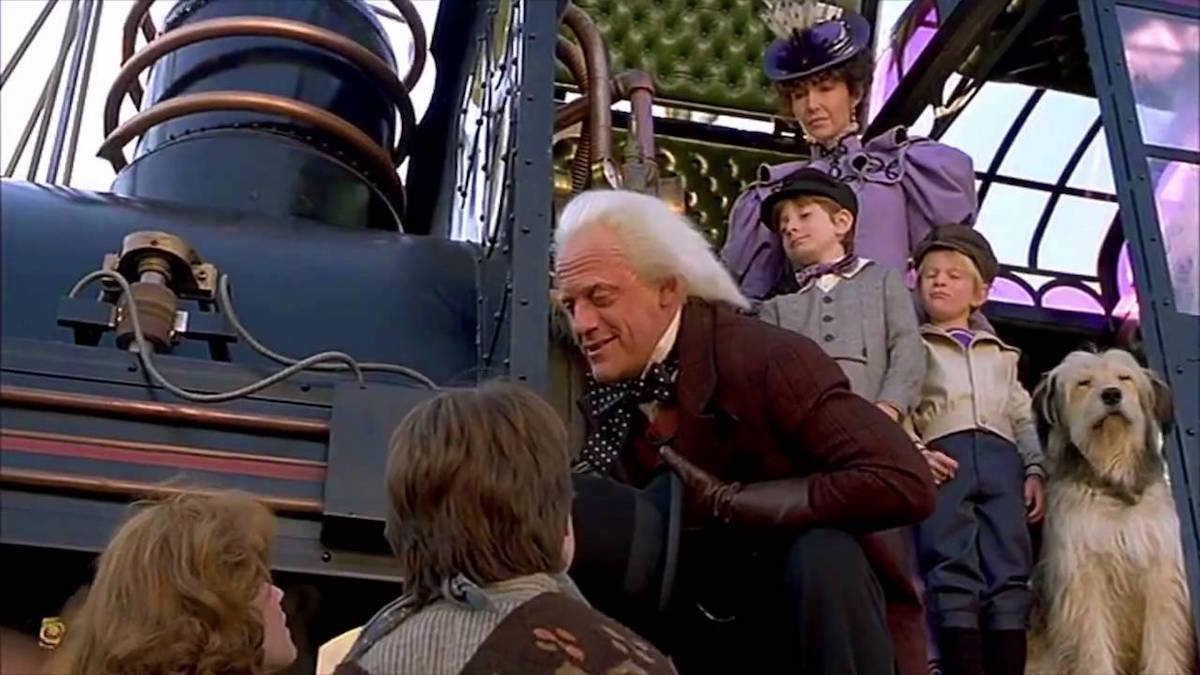 In the last decade, it’s become a common refrain among fans and industry players alike: the filmmakers should’ve “planned it better.” This trilogy could’ve been mapped out; those five sequels needed to be outlined first. Perhaps this is inevitable in an era where “shared universe” is part of the everyday vernacular, yet I cannot help but be amused when folks grow wistful over sequels with allegedly concrete roadmaps: franchises like Star Wars, Godfather… and the Back to the Future trilogy.

Whenever social media discussions about sequels or franchises that most smoothly told their sagas rear, Robert Zemeckis and Bob Gale’s little trio of time traveling adventures always spring to the forefront. With their economy of storytelling and strong fixation on characters, particularly lovable Marty McFly (Michael J. Fox) and eccentric Doc Brown (Christopher Lloyd), the three movies’ narrative is as stainless as the steel doors on the DeLorean. Even innocuous, seemingly throwaway details in the first movie turn out to have unexpectedly delightful payoffs in the sequels, such as the Doc’s interest in discovering who will win the next 25 years’ worth of World Series games.

Of course the irony in this is that Back to the Future was not planned as a trilogy; this was a “universe” structured around only one story, with its sequels acting as mere expansions on those initial foundations. Even the “cliffhanger” ending of the first movie, with Marty, Doc, and the original Jennifer Parker (Claudia Wells) piling into a now flying DeLorean to “do something about your kids,” was never meant to be more than a gag.

“We never designed the first Back to the Future to have a sequel,” director Zemeckis confirmed on the 2002 DVD release of Back to the Future Part II. “The flying car at the end was a joke, and it worked as a great joke and a great payoff. Everyone assumed we had this grand design like George Lucas did about Star Wars and had all these sequels. My only hope for Back to the Future ever was that it would make its money back.”

He goes on to say that if he had planned on doing a sequel, he would’ve never put Jennifer in the final scene—hence why in the sequel, the character (recast with Elisabeth Shue) spends most of the film asleep on a front porch.

Said Zemeckis, “I would’ve had only the Doc and Marty be in the car, and then I could’ve put them on any adventure. But what happens when you make a movie this successful is it becomes a piece of real estate, it becomes a franchise. And the reality comes at you very quickly, which is ‘we’re making a sequel. You can either help us or not, but the sequel is going to be made.’”

Fortunately, that sequel was made with most of the key players who turned the 1985 film into an enduring classic still in place, including Zemeckis and his co-writer/producer, Bob Gale, at the top of that list. Indeed, it’s even fair to look at the success of the trilogy and conclude that world-building is overrated. What makes Back to the Future shine all these decades later, both as a singular film and an appealing trilogy, is it was always about developing an intriguing story, as opposed to an open-ended milieu of content.

The first movie was originally conceived of by Gale based on a simple epiphany. While going through his father’s old high school yearbook, he came across a photograph of the old man that revealed he’d been elected class president.

“I had no idea,” Gale told Den of Geek last year. “And I’m looking at this picture of my dad, and he’s very proper and straight. And I’m thinking about the president of my graduating class who was just somebody I would have nothing to do with. We were just in completely different circles.”

This raised a million-dollar question: Would he have been friends with his dad in high school?

The dawning realization every young person must come upon, when they realize their parents and authority figures really were young folks like themselves once upon a time, had never been captured on screen before, much less in a mainstream movie through the prism of science fiction. But that’s what the original Back to the Future script did with its yarn about an ‘80s teenager inadvertently traveling 30 years into the past to spend the week with his mother and father in high school.

Granted, it’s more than the premise that makes Back to the Future so winsome. While the movie unquestionably benefits from the striking social distance between 1950s teenagers and their ‘80s counterparts—with the sexual revolution, Vietnam, civil rights, and second wave feminism between the two eras—it still plays to kids another 30-plus years later because of its intelligence and timeless universality. Taking the concept of “Chekhov’s gun” to its breaking point, there is not a single element, character, or detail set up in the first act in 1985 that isn’t paid off once Marty travels back to 1955, and then paid off again when he returns home in the denouement.

Marty’s mom, Lorraine (Lea Thompson), attempting to micromanage her children’s love lives with apparent 1950s social values? Well, in the actual ‘50s, she was smoking, drinking, and had no problem “parking” in cars with boys. Mayor Goldie Wilson running for reelection in 1985? He’s a young ambitious man on the make in ’55 (and with a keen eye for a good campaign slogan). The clock tower that hasn’t worked since it was struck by lightning 30 years ago? It becomes the gosh darn centerpiece of Back to the Future’s climax.

Everything flowed together with the precision of an actual, working clock tower, and it worked in service to the self-awareness which springs from young people seeing their parents in a different light. Plus, Alan Silvestri’s musical score just made everything Marty and Doc did seem to have the import of charging across the frontlines.

So this proverbial little ‘80s teen comedy overperformed at the box office after ending on a teasing note that left viewers hanging. Zemeckis and Gale did not write Back to the Future to lead anywhere but the line “where we’re going, we don’t need roads,” but audiences (and the studio) wanted to see what was at the end of that skyway.

Thus Back to the Future Part II and Part III came into existence—but with the ambition of its creators to make them every bit as narratively complex as the first film they were borne out from. While the sequels were very much designed on the conventional wisdom that audiences want to see their favorite characters get up to the same shenanigans, Back to the Future Part II particularly subverts this. The sequences of the film set in the future of 2015 plays into “the same but different” by bringing nearly every actor from the first film back to play their same character at a more advanced age—or younger in the unnerving case of Fox being asked to play all of Marty and Jennifer’s children—but that sequence is then quickly jettisoned for something closer to It’s a Wonderful Life than Back to the Future.

Even when Gale first began conceiving of the sequels, he imagined Marty and Doc winding up in 1967 to “correct” the future. There Marty would again see his parents, George and Lorraine McFly, in shocking ways: George would be a college professor while Lorraine would’ve become a flower child, joining the hippie movement.

However, it was Zemeckis’ input that had the story fold into itself. Instead of just playing with different time periods and doing the same setup again, the director suggested using the third act of the sequel to enter the first movie from a different vantage point. He actually did what mainstream audiences supposedly want—basically remakes of the same story—but with a much more skewed sensibility with two Martys and two Docs running around, and all of them converging on a plot that involves further cliffhangers and switchbacks on the first movie, like an ending where the sequel’s Marty surprises 1955’s Doc Brown moments after Doc had sent Marty home. Now the Marty we’ve followed for the whole second film runs up behind the Doc to say, “I’m back from the future.”

Also in a quaint departure from how sequels are conceived today, the absence of Crispin Glover as George McFly in Part II and Part III stemmed from Universal Pictures and Amblin Entertainment failing to lock actors into sequel clauses. Back then, it was assumed movies were a one-off experience, and when Glover decided he didn’t want to appear in a sequel… well, there’s a reason George McFly had to die in the alternative 1985 ruled over by a Trumpian Biff Tannen (Thomas F. Wilson).

All of these concessions and choices made on the fly were not preordained or sketched out, but the talent involved was so keen on connecting their limitations to previous successes that they made a satisfying three-part whole out of a one-off, and without getting bogged down by fan service or further world-building. Nearly every choice made in the Back to the Future sequels—with exception to the inexplicable development of Marty being unable to withstand the insult of “chicken”—organically built off character traits or story concepts in the first one, flowing into a self-perpetuating circle.

Sure, there are inconsistencies. Consider the way the third movie is seeded into the second; it betrays a looseness to the world-building when Buford “Mad Dog” Tannen’s photo in Part II looks nothing like the character design in Part III. But it doesn’t ultimately matter. The elements that really determine the films’ quality, such as character, structure, and dialogue, are airtight across all three pictures.

Strangely though, this connective tissue was hidden at the time of release. As Gale told Den of Geek last year, there was a resistance at Universal to let general audiences know a third movie was on the way until after they’d seen the second one. There was even a fight to exclude the trailer of scenes from the third film at the end of Part II (at Gale’s suggestion).

“The biggest fight that I had with the president of Universal when we were planning the release of Part II is that I was adamant that I wanted to advertise this as part two of the three-part Back to the Future series, part two of the trilogy, and he didn’t want to do that,” Gale said. “He just wanted to say, ‘This is part two. Let them find out about part three later.’”

Gale is convinced that lack of understanding that Part II was setting up Part III led to both films being somewhat underappreciated during their releases. Now their legacy is as tightly woven with the first film, as well, those early Star Wars movies are. To the point where Back to the Future is often singled out as this rare thing—a near perfect film trilogy. That might be true, but it wasn’t set up that way. There’s a lesson in that.