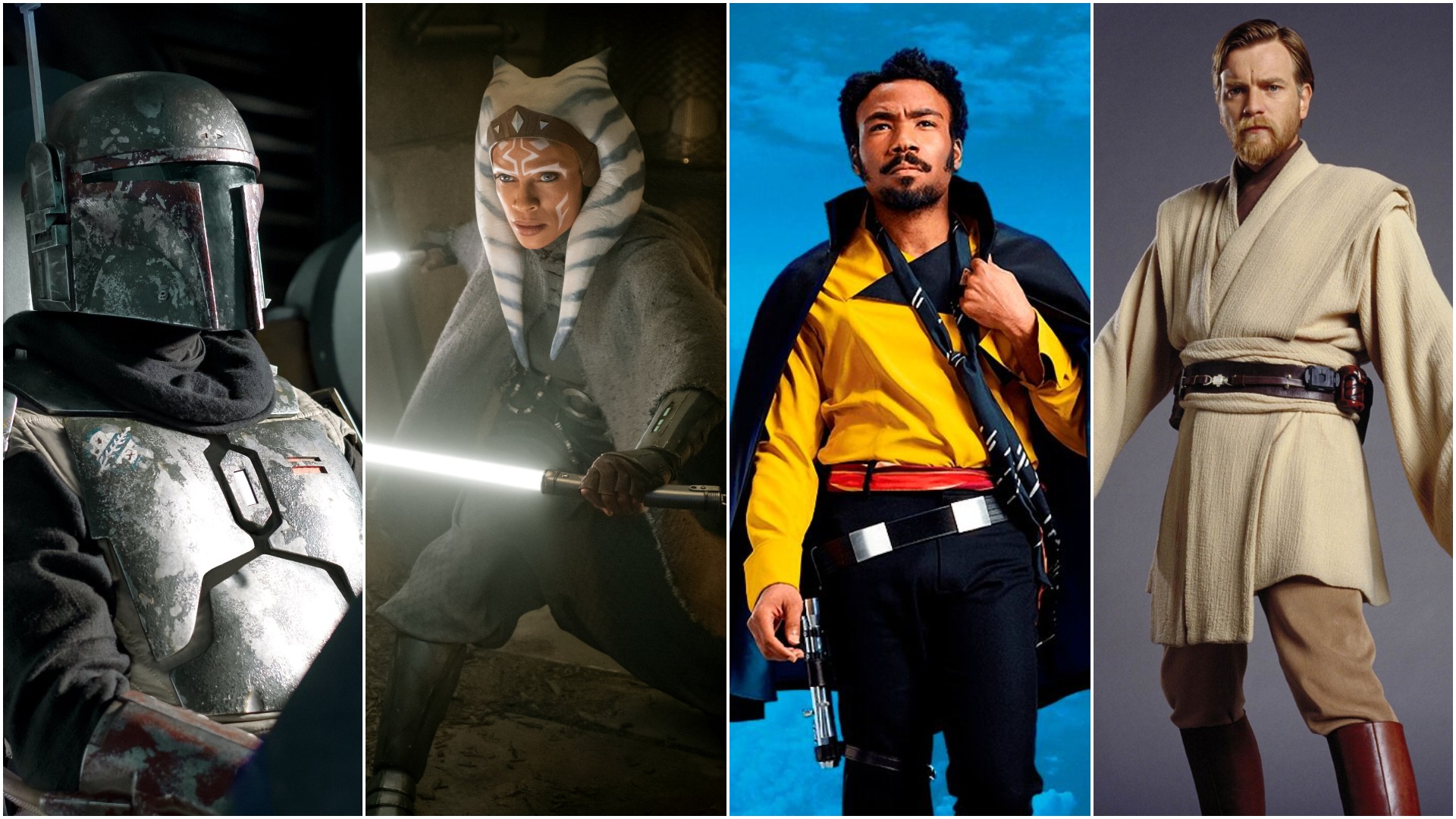 The future is bright for the Star Wars universe. Free from the Skywalker Saga films, the franchise can now forge a new path, with characters, storylines, and settings that don’t have to tie into Luke and his family drama. In fact, Disney seems to have already planted the seeds for a new type of Star Wars storytelling experience: era-specific shared universes on Disney+ that emulate the interconnectedness of the Marvel Cinematic Universe, but inside smaller, more self-contained bubbles.

We saw this start to happen in The Mandalorian season 2, which not only introduced beloved animated characters Ahsoka Tano and Bo-Katan Kryze to live-action but also ended with a teaser for the next Star Wars series, The Book of Boba Fett, which arrives in December. The Book of Boba Fett doesn’t just star the infamous bounty hunter; it’s also a showcase for Ming-Na Wen’s Fennec Shand, an assassin who debuted in the first season of The Mandalorian.

Last December, Disney announced even more Star Wars series, including two others set in the same era as The Mandolorian and Boba Fett. Most importantly, the studio teased how these series could eventually form their own shared universes in the time periods in which they’re set.

The High Republic era, which is set over 200 years before the Prequel Trilogy, marks a tonal shift for the franchise. Instead of the dreary, rusted feel of a galaxy under the control of the evil Empire, the new High Republic series takes place during a golden age for both the Jedi and the galactic government they serve. There are no Sith to be found (at least not in plain sight), and a progressive Republic is more focused on humanitarian work and the well-being of its citizens than fighting destructive wars.

A slew of books and comics are already out, with many more coming as the series’ three storytelling “phases” unfold in the next few years. Together, all of these books and comics are meant to tell one complete, interconnected story. Best of all, they share a huge cast of characters that can pop up as protagonists in one tale but cameo in another, just like in the MCU.

Making things even more interesting is The Acolyte, a new live-action Disney+ series being developed by Russian Doll creator Leslye Headland. The show is teased as “a mystery-thriller that will take the audience into a galaxy of shadowy secrets and emerging dark side powers in the final days of the High Republic era.”

The Acolyte sounds like a finale, of sorts, for everything being set up in the High Republic books and comics, while also acting as a bridge to the prequel movies. Mention of the dark side also suggests this series will cover the return of the Sith, introducing the Dark Lords that operated in the galaxy before Palpatine became the Emperor. And because The Acolyte will exist in a predominantly unexplored period of Star Wars history, with characters whose fates won’t necessarily be tied to the movies, Disney could easily expand this particular shared universe further. The High Republic could actually turn out to be Disney+’s most fruitful Star Wars era.

For the moment, no release date has been set for The Acolyte, but the next wave of High Republic books arrive this summer.

Obi-Wan Kenobi and Andor, a Rogue One prequel, take place several years after Revenge of the Sith but before the Original Trilogy, and there’s a good chance the Lando series will also be set at some point during this era, with Donald Glover likely returning as the charming scoundrel. (While Disney hasn’t confirmed any details about the latter project besides the fact that it’s happening, the studio has been trying to make a Lando spinoff with Glover since Solo.) The timelines won’t line up quite as cleanly, though. Obi-Wan Kenobi takes place nine years before A New Hope, while the events of Andor will unfold four years after that show.

But rumors suggest that Ewan McGregor will appear as Obi-Wan in Andor, too. Far from an official confirmation, it’s still an intriguing possibility if true. With these series set to premiere in 2022, Disney could make the Jedi Master the character who ties both (or all three) pre-A New Hope shows together, just like Mando is the common denominator across all of the post-Return of the Jedi projects. Could all of these series lead to an eventual big event that would set Obi-Wan, Cassian Andor, and Lando on their paths to the Original Trilogy era?

If Disney wanted to eventually connect the pre-Hope shows to the Mando ones for an even more interconnected universe on Disney+, it wouldn’t even need a specific event or series to bridge the two eras. The Original Trilogy is already there as the connective tissue. New characters introduced in Obi-Wan, Andor, and Lando could jump from one era to the other just as easily as Prequel-era characters Bo-Katan and Ahsoka have. This is especially true for characters introduced in Andor, which takes place about 14 years before The Mandalorian. That’s a relatively small time gap in Star Wars terms. And the inverse is already happening: Fennec Shand will appear in animated form in May’s The Clone Wars spinoff series The Bad Batch, which is set just after the Prequels as well.

Disney has already ordered two other series set during the same time period as The Mandalorian and The Book of Boba Fett, which take place five years after Return of the Jedi. The intriguing Rangers of the New Republic was reportedly conceived as a spinoff series for Mando associate Cara Dune before actor Gina Carano was fired from the franchise earlier this year, but that probably won’t be the only connection these series have with each other. Meanwhile, Ahsoka is poised to continue the hero’s search for Grand Admiral Thrawn right where it left off in The Mandalorian season 2.

Disney isn’t just trying to cash in on the success of The Mandalorian with spinoffs for the show’s most popular characters, though. The company has also confirmed that these particular shows will ultimately converge in a big story event. Are Mando, Ahsoka, Bo-Katan, Boba Fett, Fennec Shand, and friends eventually going to team up against Grand Admiral Thrawn in an epic Avengers-like finale? It sure feels that way.

Today, Marvel fans take this shared universe storytelling structure for granted, but this is still very new territory for Star Wars. Whether it works or not will likely depend on how many Mandalorian fans flock to Boba Fett later this year. But Disney is betting big on this approach.

On Disney+, Star Wars has found new ways to explore the galaxy far, far away while introducing us to new characters and places to love. Now comes the next frontier: the shared universe, a first step into a larger world.

Not all upcoming Star Wars projects fit snugly in a particular era or shared universe. There are outliers, like Patty Jenkins’ upcoming movie Rogue Squadron, which will “introduce a new generation of starfighter pilots as they earn their wings and risk their lives in a boundary-pushing, high-speed thrill-ride, and move the saga into the future era of the galaxy.” That last bit suggests that the highly-anticipated film will explore what happens next after the Sequel Trilogy, but we’ll find out for sure when it hits theaters in Christmas 2023.

More elusive is Taika Waititi’s untitled Star Wars movie. Besides an intriguing Star Wars logo made of stone, Disney has teased virtually nothing about the Thor: Ragnarok director’s take on Star Wars. It doesn’t even have a release date. All we know is that it’s in development.

Meanwhile, Visions, an anthology of anime-inspired short films due out this year, and A Droid Story, which “will introduce us to a new hero, guided by legendary duo R2-D2 and C-3PO,” will join The Bad Batch as the latest animated offerings from the galaxy far, far away. All of these series are destined for Disney+.