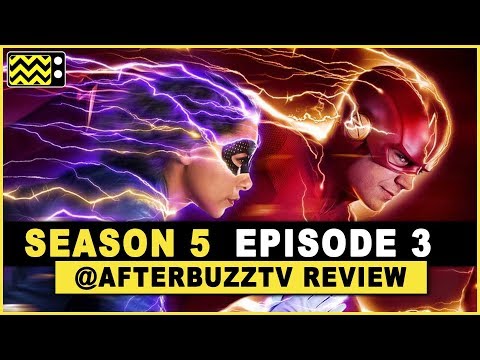 AfterBuzz
Share on Facebook
Share on Twitter
Share on Pinterest
Share on LinkedIn
Well he’s finally here, Sherluck Wells makes his epic debut, Caitlin and Ralph team up to dive deeper into Cailtin’s frostys past and Cisco is on the chopping block of Meta’s to go for Cicada.   Tune into the discussion with hosts Drew Jones, Chauncey Robinson, Jaimie Alexander and Zach Silverman.

Flash is based upon characters published by DC Comics where through a freak accident scientist Barry Allen (Grant Gustin) is given the power of super speed that transforms him into the Fastest Man Alive.

After witnessing his mother’s (Michelle Harrison) supernatural murder and his father’s (John Wesley Shipp) wrongful conviction for the crime, Barry Allen (Grant Gustin) is taken in by Detective Joe West (Jesse L. Martin) and his family. Allen becomes a brilliant but socially awkward crime scene investigator for the Central City Police Department. His obsession with his tragic past causes him to become an outcast among his peers; he investigates cold cases, paranormal occurrences, and cutting-edge scientific advancements that may shed light on his mother’s murder. No one believes his description of the crime—that a ball of lightning with the face of a man invaded their home that night—and Allen is fiercely driven to vindicate himself and to clear his father’s name. Fourteen years after his mother’s death, an advanced particle accelerator malfunctions during its public unveiling, bathing the city center with a previously unknown form of radiation during a severe thunderstorm. Allen is struck by lightning from the storm and doused with chemicals in his lab. Awakening after a nine-month coma, he discovers he has the ability to move at superhuman speeds. Dr. Harrison Wells (Tom Cavanagh), the disgraced designer of the failed particle accelerator, describes Barry’s special nature as “metahuman”; Allen soon discovers that he is not the only one who was changed by the radiation. Allen vows to use his gifts to protect Central City from the escalating violence of metahuman criminals. He is aided by a few close friends and associates who guard his secrets.

Six months after the events of the first season, after a singularity event, the Flash is recognized as Central City’s hero. Jay Garrick (Teddy Sears), the Flash from a parallel universe, visits Barry and warns him another speedster named Zoom (also portrayed by Sears and voiced by Tony Todd) is trying to eliminate everyone connected to the Speed Force throughout themultiverse. Jay, and later Harrison Wells’ parallel universe counterpart, work to help Barry and his friends stop Zoom. Joe and his daughter, Iris (Candice Patton), struggle with their shared painful past related to their family, especially after the arrival of Iris’s brother Wally West (Keiynan Lonsdale), whom Francine West (Vanessa A. Williams) gave birth to shortly after abandoning her family.